This Man Was Declared The First Emperor of the United States 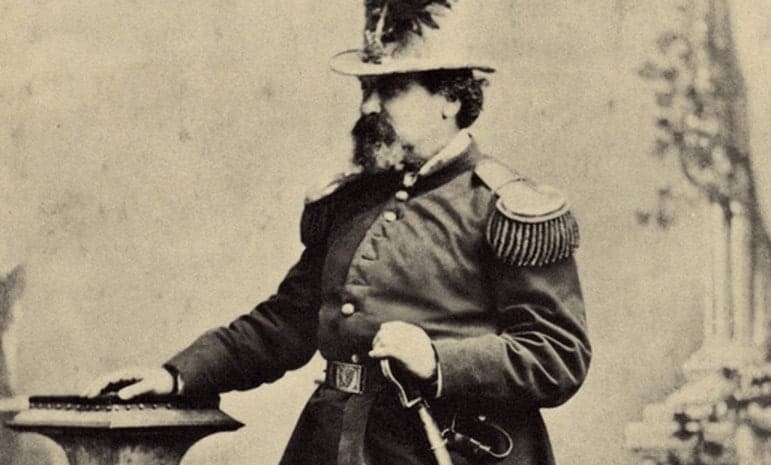 This Man Was Declared The First Emperor of the United States

Joshua Abraham Norton was born in England but much of his early life was spent in South Africa. He emigrated to San Francisco in 1849 with a substantial inheritance of $40,000 (over $1 million in 2015 dollars).

For a time, he made a living as a businessman and even had success in the real estate market. He increased his fortune from $40,000 to $250,000. He became well known in San Francisco for his business dealings and lived a lifestyle that was befitting a man of his fortunes.

Things took a turn for the worst when an investment he thought would pay off big, cost him everything. A famine in China caused the country to stop the export of rice which meant there was no supply of rice to San Francisco. Norton heard of a ship of Peruvian rice that was due to arrive. He paid a fortune for the entire shipment of rice believing that he could corner the market.

But soon after several more shipments of rice arrived causing the value to plummet. Norton took the rice dealers to court on the grounds that he had been misled but the courts ruled against him. The investment and court case cost him his fortune and by 1858 he was living in a working class boarding house.

He became disgruntled with the legal and political workings of the United States and in 1859 he decided it was time for a change. On September 17th, 1859, he sent letters to a number of papers throughout the city. The letters stated:

“At the peremptory request and desire of a large majority of the citizens of these United States, I, Joshua Norton, formerly of Algoa Bay, Cape of Good Hope, and now for the last 9 years and 10 months past of S. F., Cal., declare and proclaim myself Emperor of these U. S.; and in virtue of the authority thereby in me vested, do hereby order and direct the representatives of the different States of the Union to assemble in Musical Hall, of this city, on the 1st day of Feb. next, then and there to make such alterations in the existing laws of the Union as may ameliorate the evils under which the country is laboring, and thereby cause confidence to exist, both at home and abroad, in our stability and integrity.

— NORTON I, Emperor of the United States”

So how did the papers respond to the letters? And what became of the Self-Appointed Emperor of the United States? Read on to find out!

The San Francisco Bulletin took the letter as a joke but one that would be sure to get attention for their paper so they reprinted it. It would be taken up by other papers who also saw the humor and later Norton would even add Protector of Mexico to his self-given title. Norton and the people of San Francisco took the printing of the letters as proof of his regal title and thus began his reign. He started to walk the city in regal attire and would stop for anyone that would wish to pay their respects to the great Emperor Norton I.

As Emperor, he even took to issuing proclamations and posting them in the city or printing them in the papers. On October 12th, 1859, he went as far as to abolish the United States Congress. He said that the fraud and corruption within congress prevented a “fair and proper expression of the public voice.”

In March of 1860 when the Congress was in session, in violation of his edict, he called upon the army to depose of the elected officials. His entreaties were largely ignored and he eventually decided to allow Congress to continue. But in 1869 he abolished both the Democratic and Republican parties because of “party strife now existing within our realm.”

While many of his proposals were outlandish there were some that showed that Emperor Norton I may not have been as crazy as many people thought. He called for a League of Nations and he forbade any conflict between different religions. He then called for a bridge or a tunnel that would connect Oakland to San Francisco – once it was determined which would be the best project. The Bay Bridge was completed in 1936 and the tunnel in 1969, long after the reign of the Emperor.

Emperor Norton I was beloved by the city of San Francisco. His regal appearance was welcomed at local restaurants who would let him eat free and put brass plaques on their doors stating “by Appointment to his Imperial Majesty, Emperor Norton I of the United States.”

Every play that opened would reserve balcony seats for the Emperor and Norton’s self-penned seals of approval were highly sought after and were even a boost to trade. He even printed his own money to pay his debts and it became accepted as local currency in San Francisco. When his regal attire started to look worn the San Francisco Board of Supervisors provided him with a new one.

He died a pauper in 1880 and the San Francisco Pacific Club took out a collection for a proper funeral. A many as 30,000 attended and he was buried in the Masonic Cemetery at the expense of the city. In 1934 the remains were transferred to Woodlawn Cemetery where a large stone is inscribed “Emperor Norton I, Emperor of the United States and Protector of Mexico.”

Today there is a celebration every year on the anniversary of his death and since 1934 there has been a campaign to rename the bridge the runs from Oakland to San Francisco as the Emperor Norton Bridge. The Emperor’s Bridge Campaign works to memorialize the life of the great emperor and in 2018, the 200th anniversary of his birth they plan to proposition the state once again to add The Emperor Norton Bridge as a secondary name to the Bay Bridge.