18 Successes and Disasters Created to Battle the Great Depression 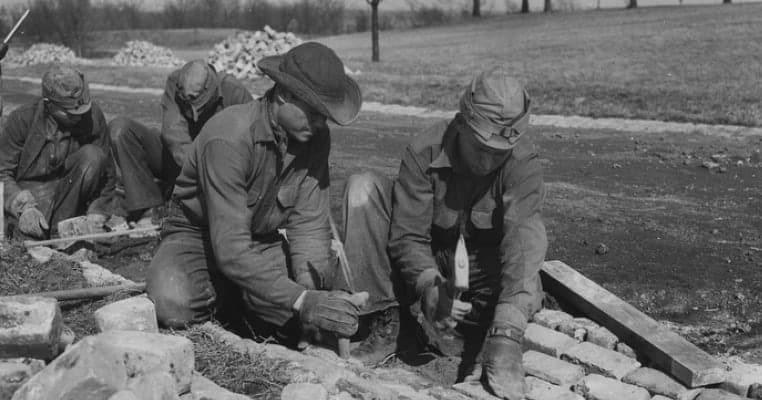 18 Successes and Disasters Created to Battle the Great Depression

In Roosevelt’s annual message to Congress in January 1935, what is now the television extravaganza known as the State of the Union Address, he announced five goals and initiatives for the nation to achieve. Newspaper columnists and radio pundits quickly labeled FDR’s plans as the Second New Deal, in many cases derisively. Roosevelt called for a national work relief program to deal with unemployment (the WPA); the rehabilitation of urban slums; a system of Social Security for the elderly and infirm, security against unemployment; and a better means of exploiting America’s natural resources. Roosevelt faced an increasingly wary Congress, which viewed the extension of the Executive Branch as an encroachment on its own power, and several setbacks in the courts to his original programs, despite the success of several in curbing the worst of the Great Depression.

He also faced the rise of Nazi Germany, the continuing aggression of the Empire of Japan, and the need to improve America’s defensive posture. Roosevelt was the head of state of the only modern nation in the world which lacked any sort of program to ensure the financial security of its elderly. In proposing the Social Security Administration, Roosevelt insisted that the program be funded through payroll taxes, rather than the general fund, (which he needed to conserve for other purposes) at a time when the United States did not yet deduct income tax withholding from pay checks. Federal income tax withholding did not begin until the United States was involved in the Second World War. But Roosevelt stuck to his guns in Social Security taxes, later stating, “We put those payroll contributions there so as to give the contributors a legal, moral, and political right to collect their pensions and unemployment benefits”.

Possibly the most critical action, and most enduring, of Franklin Roosevelt’s long Presidency was the Social Security Act of 1935. That year poverty rates among what would at a later date be known as senior citizens exceeded 50%. Employer funded pensions were virtually non-existent. Once a person’s life savings were used up they had only family, friends, or charities to care for them. Roosevelt’s proposal faced strong opposition from conservatives, who argued that retiring workers would weaken the labor force. Others opposed it on the grounds that it was a form of socialism, threatening to the capitalistic system. Several professions and trades were excluded from the act, including farm labor and librarians, most hospital employees and nurses, and all government workers. Almost half of the labor force was excluded by the terms of the original act.

Because the Constitution prohibits the federal government from levying taxes on the governments of the states, all state employees were excluded, since the law prohibited the federal government from levying the payroll deduction. Despite the opposition from conservatives in Congress and the vast number of Americans who remained without coverage, Roosevelt managed to have the bill passed and it was signed into law in August 1935. Despite arguments by many that the new law was unconstitutional the Supreme Court upheld the law in two separate decisions in the spring of 1937. In 1939 the act was amended to create a trust fund under the Secretary of the Treasury and to add family protection, allowing widows and dependent survivors to receive benefits if the earning worker died. Social Security has remained a point of debate for over eighty years, with no end in sight.

The National Labor Relations Act was born out of the failure of the NRA and the controversial means by which it had supported labor at the expense of management in the eyes of many businessmen and conservatives. The act ensured the right of workers to organize into labor unions of their choice, and guaranteed them the right of collective bargaining with their employers over wage increases, benefits, working conditions, and other areas of contention. At the same time the act created the National Labor Relations Board to help reduce labor stoppages and walkouts. The growth of labor unions became almost exponential following the passage of the act, and organized labor became a solid supporting bloc for the New Deal. The American Federation of Labor and the Congress of Industrial Organization, not yet affiliated with each other, competed for workers to join.

The NLRA led to another piece of legislation three years later, which would be the last legislation enacted as part of the New Deal. In 1938 Congress passed the Fair Labor Standards Act, which forbade the employment of children under the age of sixteen (except in certain categories, such as on farms), established a national minimum wage ($.25 per hour), and a work week of 44 hours. The act, unlike most of the New Deal, was strongly supported by northern business interests and manufacturers as a defense against jobs being taken away by southern interests, where wages were often lower. The establishment of a national minimum wage leveled the playing field in their view and they successfully lobbied the conservative members of Congress to pass the bill.

17. The recession of 1937 damaged the economy again

It is an often repeated myth that the Great Depression did not end until the United States military production ended it during the Second World War. In fact, by 1937 production and wages had been restored to the levels of 1929. Profits by industry had also recovered to their pre-depression levels. Farm profits had stabilized, and in many cases improved to levels never before seen by the agricultural industry. Unemployment remained higher than in 1929, but had dropped to just below 15% by the spring of 1937 (from a high of 25%). Then it shot up again. By late 1937 the economy again fell into a recession which lasted through much of 1938. Although neither as devastating nor as severe as the Great Depression (average personal income grew throughout the recession), it was nonetheless an economic setback which was quickly politicized.

The New Deal was blamed for the recession by conservatives, who argued that Roosevelt’s policies had been damaging to business. Social Security was resurrected as a contributing cause, with conservatives claiming the program had removed too much cash from the money supply. Roosevelt argued that the recession was caused by big business which wanted to remove the worker’s safeguards the New Deal had installed. Franklin Roosevelt opposed deficit spending throughout his Presidency (which was one reason for the Social Security payroll deduction), but in early 1938 he authorized a $5 billion dollar program to stimulate the economy through government investment, ensuring that the budget for that year would be in deficit. By mid-1938 the economy had for the most part recovered. The causes of the recession of 1937 are still debated among historians and economists.

18. The Great Depression was over before America entered the war

In 1940 the United States economy received another shot in the arm as Great Britain, at war with Nazi Germany, became dependent on the United States for non-warlike supplies such as heating oil, food, and raw materials (many of which were also useful to make war, such as steel and rubber). Unemployment in the United States dropped steadily, and after America entered the war it reached full employment rapidly. Despite the American people finally achieving full employment and with jobs paying well, the goods which were produced were frequently rationed, including foodstuffs, rubber, gasoline, and many others. Travel was restricted as wartime priorities were enforced. Detroit quit making new cars and instead concentrated on the weapons of war. Piano factories made components of Norden bombsight. Radio manufacturers made anti-aircraft shell fuses. Consumer goods, which Americans could finally afford, were unavailable.

During the three years between the Recession of 1937 and the entry of American into the war the national economy grew steadily. When the war began and the privations imposed on the home front took hold, it was linked with the Depression of the early 1930s. Following the war the American economy was again boosted by the GI Bill, the expanding housing market, the availability of new automobiles, and the government-funded boom in road building. Because prosperity wasn’t really felt by the American public until the war ended, the belief that the war ended the Great Depression emerged. It didn’t and in fact a brief recession followed the war as industry retooled for consumer goods and unemployed returning veterans clogged the labor market. The Great Depression still marks the American psyche, its landscape altered by programs such as the CCC and its federal budget by many of the agencies created by the New Deal and subsequent federal programs which continue to affect the American economy and lifestyle.

“The Great Depression: The United States in the Thirties”. Robert Goldston. 1968

“What the New Deal Did”. David Kennedy, Political Science Quarterly. 1969