18 Inhumane and Notorious Prisons in History 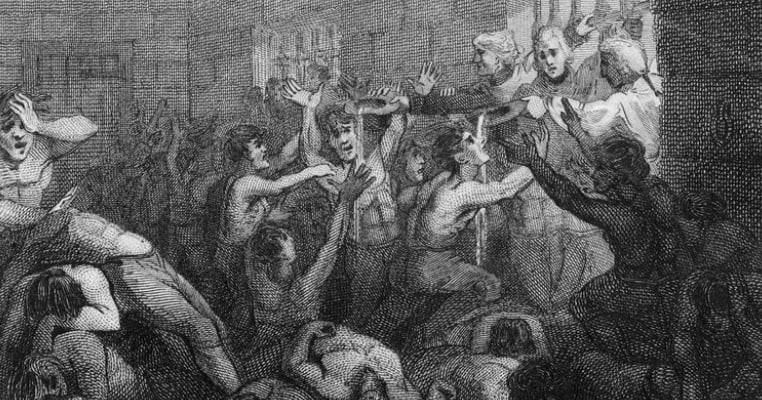 18 Inhumane and Notorious Prisons in History

15. The Solovki Prison Camp was known as the mother of the Soviet Gulag

Gulag is an acronym in Russian for Main Administration of Camps, which through usage became an English word referring to forced labor prison camps. The Soviets demurred from use of the term forced labor and referred to the camps as corrective labor camps, which were established under Lenin and greatly expanded by Stalin in the 1930s to the 1950s. Often the only route out of Lubyanka alive was to the destination of one of the camps. The Solovki camp was established by confiscating a monastery in the White Sea in 1922, executing the monks who protested, and burning all of the wooden buildings. The remaining monks were sent to other forced labor camps.

Although petty criminals were sent to the gulag, most of the inmates were political prisoners, and the Soviet guards used the criminal inmates as spies on the others. The main corrective labor performed by the inmates was on the White Sea – Baltic canal, part of Stalin’s Five Year Plan, and a project in which up to 25,000 laborers died. Another up to 10,000 inmates were shot by camp guards or transferred to Solovki for execution. When war clouds loomed in 1939 Solovki was deemed to be too near the front lines, and though a few prisoners were transferred to other camps, the majority were transferred to the mainland and shot. The exact number of prisoners who died at Solovki or while being transferred from it cannot be known with certitude.

16. Convicts could be sentenced to the galleys as late as the early nineteenth century

Galleys served the state as seagoing prisons for centuries, including the Phoenician, Egyptian, Mesopotamian, Greek, and Roman Empires, and continued to do so in the European empires up to and including that of Napoleon. Charles IX of France decreed that sentences to the galleys could not be for a period of less than ten years, as part of his expansion of his fleet in 1564. Prisoners condemned to the galleys were branded, marking them permanently as a galley slave even after a sentence was completed, though completion of sentence was academic. Nobody on board of the vessel kept track of the time served, other than the prisoner himself, and most never left the galleys.

In the latter half of the 18th century oars mostly disappeared from ships, though some smaller vessels still retained oars known as sweeps. Under French law, sentencing to the galleys continued when there were no galleys. The French navy continued to receive the prisoners, keeping them in dungeons ashore or on prison hulks in the harbors of Brest, Toulon and Marseille, using them for the heavy labor of the ports. They were fed the same rations as the navy allotted its crews, salt pork and beef, ship’s biscuit, and water. Most of the galley prisoners were kept shackled to one another as they worked, and few survived their sentence. Many of the prisoners which were sent by the French to the Devil’s Island penal colony were originally galley slaves, which the French navy wanted to rid itself of, due to the expense of retaining them.

17. Colditz Castle was both a mental health asylum and a prison for political prisoners before serving as a prisoner of war facility

Colditz Castle was over 400 years old when it was converted to serve as a sanitarium for both the mentally disturbed and those suffering from tuberculosis beginning in 1829. It continued in that role until 1924, when the disruptions of post-World War I Germany led to its closure. In 1933 the new Nazi government converted the castle to be a prison for political enemies, communists, Jews, and some convicted of petty crimes by the German courts. After the completion of concentration camps most such prisoners were transferred, and in 1939 Colditz became a prisoner of war camp, receiving Poles, Czechs, British and British Empire, and French prisoners.

Although the Germans considered Colditz to be escape proof, several POWs successfully escaped the complex through a variety of daring means. In 1943 the Germans decided to keep only British and American prisoners at the camp. After the war, during which Colditz was liberated by the Americans, it fell under the Soviet zone of occupation. The Soviets used it for a time as a lockup for local criminals and for political dissidents, until the sheer number of uncompleted escape tunnels and hide-outs within the structure forced them to abandon it as a prison. French, Dutch, Polish, Belgian, British, and Indian officers all successfully escaped from Colditz during the war, and many other planned attempts were abandoned as it became clear that the war was nearly over.

18. Yuma Territorial Prison in the Arizona territory opened in 1876

When the Yuma Territorial Prison opened, receiving its first seven inmates in 1876, it was considered by those sentenced to serve their time in the new facility as virtually escape proof without considerable help from outside. Surrounded by arid desert, baking in the summer heat, and with well-armed and trained guards, Yuma was not a desirable destination. Much of the prison was built by the prisoners themselves under the watchful eyes of the guards. In 1878 the prison’s first female inmate arrived. In 1884 electricity was installed in the prison, for lighting as well as a for a forced air ventilation system. Riots occurred in the prison, including an outbreak among the prisoners in 1887 which led to the deaths of four inmates.

Although the prison was eventually equipped with a dark cell, for solitary confinement as a punishment, and used the method of shackling known as a ball and chain for other misbehavior, it also contained a library which eventually stocked over 2,000 books, making it the largest in the Arizona Territory at the time. By the first decade of the twentieth century the prison was overcrowded and rather than enlarge the Yuma Prison another facility was built in Florence. Yuma Territorial Prison closed as an incarceration facility in 1909 (Arizona did not become a state until 1912), and later housed Yuma High School for a short time. In 1961 the former prison site became Arizona’s third state park. Yuma Territorial Prison has been a plot device in numerous western themed motion pictures and television programs, and remains a popular tourist destination.

“The Crowd in the French Revolution”. George Rude. 1967

“Inside the Apple” A Streetwise History of New York City”. Michelle Nevius and James Nevius. 2009

“The Worst Poverty: A History of Debt and Debtors”. Hugh Barty-King. 2006

“Solovki: The Story of Russia Told Through its most Remarkable Islands”. Roy R. Robson. 2004