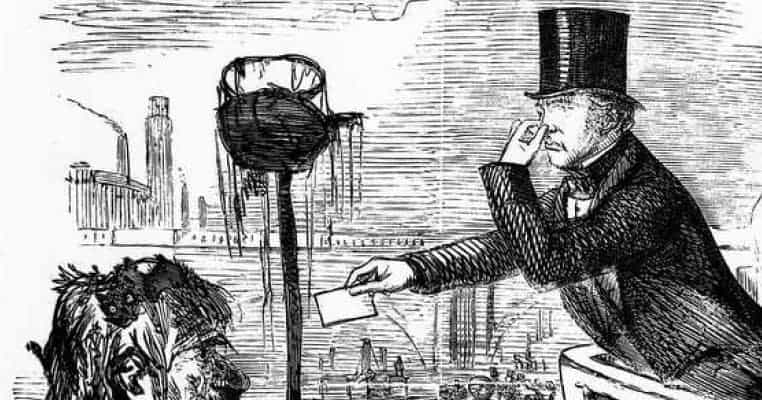 7. While the people of London suffered, Parliament maintained that “Her Majesty’s Government” wasn’t responsible for the filthy river

Even when they were considering leaving London for Oxford in order to escape the Great Stink, politicians were reluctant to take action to clean up the Thames. While the people of London suffered with the putrid smell, the country’s leaders debated who was responsible for keeping the river clean. Lord John Manner, a key member of the Conservative government, argued in July 1858 – at the very height of the Great Stink – that “Her Majesty’s Government has nothing whatever to do with the state of the Thames”.

In theory, the Metropolitan Commission of Sewers was responsible for the cleanliness of London’s water, including the state of the Thames. However, its budget was nowhere near big enough to carry out any meaningful work. Moreover, it didn’t have the power to impose any form of taxation in order to pay for the much-needed upgrades to the capital’s drainage and sewerage system. As the situation became even worse, however, Prime Minister Benjamin Disraeli had no choice but to step in and break the deadlock. As The Times reported at the end of July, “Parliament was all but compelled to legislate upon the great London nuisance by the force of sheer stench.”

6. Huge sums of money were spent on dumping tons of chlorine into the river but this short-term fix was no match for the Great Stink

Even though Parliament didn’t immediately release funds to improve London’s sewerage system, the city authorities did spend a lot of money trying to make the Big Stink go away. From the beginning of June 1858 through to the end of July, around 200 to 25- tons of lime chloride was dumped into the Thames in an effort to mask the awful smell. Far from having the desired effect, however, the lime chloride reacted badly with the effluent in the river and ended up producing noxious gases. For all the money the London authorities threw at the problem, the Great Stink was just being made worse.

The only people who did benefit at this time were the huge numbers of unskilled day laborers who had moved to London over the course of the mid-19th century. Several thousand were employed on day contracts to dump lime chloride into the river at high tide. Then, when the water was at its lowest, these day laborers would go out onto the filthy banks of the Thames to pile lime onto the piles of human waste. The short-term fix was costing the London City Council around £1,500 a week – a huge amount in those days, and all for nothing.

Disraeli succeeded in getting the Act passed through Parliament. It gave the Metropolitan Board of Works (MBW) full responsibility for the state of the Thames. More importantly, it allowed the Board to borrow the huge amount of £3 million, plus it gave the board the ability to levy a small charge on London’s households. This way, the money could be paid back to the government over the next 40 years. Significantly, the sum was enough to put Bazalgette’s ambitious plans for a new sewerage system into action.

Inevitably, the plans went over budget. Some 400 draftsmen were employed to work on the designs and then thousands of day laborers were brought in to build the tunnels and the pumping stations. The Prime Minister approved an additional £1.2 million in funding, bringing the total up past the £4 million mark, making this one of the most expensive engineering projects ever carried out, not just in England but anywhere in Europe.

London benefited almost immediately. The city was only hit by one more cholera outbreak, and this occurred in the east of the city, in an area where the new sewerage system had not yet been introduced. Hundreds of tons of human waste were being carried out of the city every day. The Great Stink was no more and people could get back to being proud of their river again. Parliament was so impressed with Bazalgette’s work that they intended to give him a bonus of £6,000, equivalent to three years’ salary. While this plan was vetoed, soon after the completion of the Northern Drainage System, Bazalgette was invited to the Palace to receive his Knighthood.