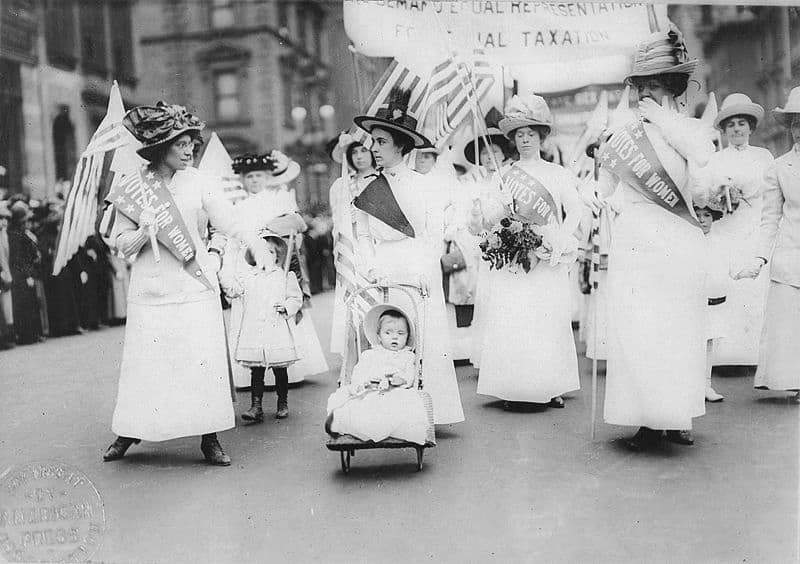 15. “Petticoat Rule” Will Dominate The Government

In the year 1910, when suffragettes were beginning to win the fight for the vote, Baroness Orczy, the author of The Scarlet Pimpernel, wrote a book entitled Petticoat Government. Like The Scarlet Pimpernel, Petticoat Government was about the French Revolution, the abuses of the aristocracy, and the ordinary people. Rather than critiquing the guillotine, however, it looked at the massive influence that Madame de Pompadour, a mistress of King Louis XV, held over the French government. This critique of women in government — written by a woman — did not concern the dealings of an elected official but rather someone that many considered to be a prostitute.

One concern about giving women the right to vote was that the government would fall under “petticoat rule,” meaning that it would come to be run entirely by women. Considering that women were not viewed as being competent in their own right but instead were expected to stand beside their husbands, this ideal was seen quite negatively. Today, though, there are entire cities that are run exclusively by women, and some countries are contemplating what the repercussions of a solely female government might be.

Perhaps there is something to this argument, after all. Also, maybe a “petticoat government” wouldn’t be such a bad thing.

16. The Evil Women May Incur Is Worse Than The Good They Already Have

Like plenty of the previous arguments given against women’s suffrage, this one contains several rather obvious false assumptions. The first false assumption is that the government, as it currently existed, was excellent. However, the era of the women’s suffrage movement came to be known as “the gilded age,” because though it looked clean and pleasant on the outside, the government was rife with corruption, infighting, and greed. Trusts and monopolies had become even more powerful than the government, and the progress of building the American railroad was destroying the environment. The men’s government, which did not allow women to vote, was sorely lacking in morality and foresight for the future.

The second false assumption is that evil will be the result of women getting the right to vote. There would not only be uneducated, emotional women finding themselves exposed and torn apart at the voting booths, but the very fabric of society — concerning the separate roles of men and women — would be torn asunder. The result could only be complete social decay.

However, what did women voting bring about? Social progress and reform, leading up to the rights of African Americans to vote and today fighting against gender discrimination and harassment.

Where Did We Find Our Stuff? Here Are Our Sources!

“The Anti-Suffrage Movement” by Julia Blush, from The British Library online collections. March 5, 2018.

Congressional Record: The Proceedings and Debates, 1915.

“A Suffragette’s Work Is Never Done” by Ross Coggins, The Washington Post, August 21, 1994.