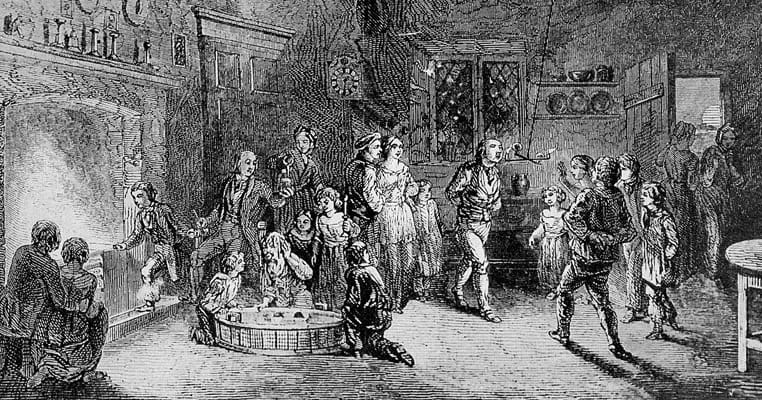 5. The Original Jack-o’-Lanterns Were Turnips or Beets

The tradition of carving lanterns, which would later be called jack-o’-lanterns, began in Europe. Pumpkins, on the other hand, are a crop from the New World and would not have been widely available in Europe until long after the tradition of carving lanterns had begun. Before the importation of pumpkins would have occurred, Samhain and Halloween lanterns were carved from native root vegetables such as turnips and beets.

When Irish immigrants, fleeing the 19th-century potato famine, came to America they brought with the tradition of carving turnips for Halloween. However, turnips were not widely cultivated in the United States at the time, and pumpkins were more plentiful. Thus was born the American tradition of pumpkin jack-o’-lanterns. Pumpkin carving is big business now, with millions of pumpkins being sold every autumn in the United States alone.

The name Jack-o’-Lantern comes from a folk story about a mean-spirited and tight-fisted farmer who continually plays tricks on the devil. When the farmer finally died, the devil got his revenge. He forced Jack to wander purgatory forever, with only a burning lump of coal from hell to light his way. Jack, still being a bright man, carved a turnip lantern to contain the burning lump of coal and help guide his lost soul out of purgatory.

4. Halloween Is the 2nd Most Commercial US Holiday

Christmas is the most commercial holiday in the United States, with gift giving driving the bulk of the spending. However, Halloween has taken the second spot as one of America’s most commercial holidays. Americans spend an average of over 6 billion dollars a year on Halloween between costumes, decoration, themed foods and, and candy. Despite sounding like a lot, 6 billion still barely holds a torch to the almost 500 billion Americans spend annually on Christmas.
About a third of the six billion dollars spent on Halloween is spent on candy. If measured in chocolate, that much spending would equate to approximately 90 million pounds of chocolate bars. While every state has its own favorite candy, based on total purchases, some current favorites are Snickers, Twix, Reese’s Peanut Butter Cups, and Pixy Stix.
A rapidly growing area of spending is costumes…for pets. Americans spent over 300 million dollars on pet costumes in 2015, a number which is only expected to increase as pets continue to be treated more and more as members of the family. For those who are curious, the most popular dog costume in 2015 was the Star Wars Sith Lord, Darth Vader. Yoda and Ewoks also made the top 10 most popular pet costumes.

When one thinks of Irish holidays, St. Patrick’s Day is undoubtedly the first to come to mind. However, St. Patrick’s Day is mostly an Irish-American invention that has inflated what was once a minor religious holiday into a celebration of all things “Irish.” In reality, St. Patrick may well not have been Irish himself, and the color green would have been the blue woad color of the Celts. St. Patrick’s most significant accomplishment was also driving paganism out of Ireland – the very idolatry which gave us all Halloween through the genuinely Irish festival of Samhain.

Samhain was a Celtic festival that marked the end of the harvest season and the beginning of the darker half of the year. It was also believed to be a time in which the veil between the lands of the living and the dead was its thinnest, allowing spirits to walk amongst the living. Bonfires were lit during Samhain to help drive away spirits and other spectral visitors. Masks and costumes were worn to make the wearers unrecognizable to hostile spirits.

As Europe turned to Christianity, the Catholic Church took elements of Samhain to create a festival before the Christian holiday of All Saint’s Day. All Saint’s Day (also known as All Hallows) was moved from May to November 1st to create the hybrid holiday to appeal to pagans. The name Halloween comes from a shortening of All Hallow’s Eve to Hallow’s Eve to Hallowe’en and

In the Victorian era, Halloween still retained many folk traditions concerning romance and diving one’s romantic future. Halloween postcards played up these traditions, with countless postcards showing couples surrounded by pumpkins, women conjuring the faces of men from cauldrons, and other festive, romantic imagery. Given that postcards and calling cards were common tools of courtship in the Victorian era, it would appear Halloween got in on the wild fun.

Postcard collectors especially prize Halloween ones due to their colorful and unique imagery, many of which are tied to long-forgotten Halloween customs. One famous example shows stalks of floating kate with a poem about bonny sweethearts. During the era, a favorite game was pulling up a kale stalk blindfolded. The shape of the stem foretold your future lover’s form, while the flavor of the stalk foretold their temperament. The sweeter, the better! Other postcards referenced customs such as eating an apple while looking in a candle-lit mirror to see the face of one’s future spouse.

1. A Family Committed the Only Halloween Candy Poisonings

The first recorded Halloween candy poisoning was in 1970. A little boy died of a heroin overdose, and police found traces of the drug in his Halloween candy. However, it later came to light that the boy had found his uncle’s stash of heroin and consumed some, leading to his death. Hoping to pin the crime on someone else instead of revealing the family’s drug secret, the family knowingly sprinkled heroin on the boy’s candy to implicate a stranger.
The second, and final, recorded Halloween candy poisoning occurred in 1974. Timothy O’Bryan, of Pasadena, Texas, died after eating a Pixy Stick that was found to contain potassium cyanide poison. His father attempted to blame one of the houses they’d trick-or-treated at, but he couldn’t remember which one or any details beyond a “hairy arm.” It was later found that Richard, his father, had taken out a significant life insurance policy on the boy just days before Halloween and had asked coworkers where to buy cyanide.

“The History of Halloween and Its Postcards” S&C ETC., Past & Present. October 2014.

“The most popular Halloween candy in every state” Leanna Garfield, Business Insider. October 2016.

“I’m Wiccan and This is What Halloween Means to Me” Emma Cueto, Bustle. October 2013.

“Ask Tom: How often is there a full moon on Halloween?” Tom Skilling, Chicago Tribune. October 2015.

“If You Want to Adopt a Black Cat, You May Have to Wait Until Halloween Is Over” Danny Lewis, Smithsonian. October 2016.