16 Steps These Criminals Took To Escape The Notorious Alcatraz Prison 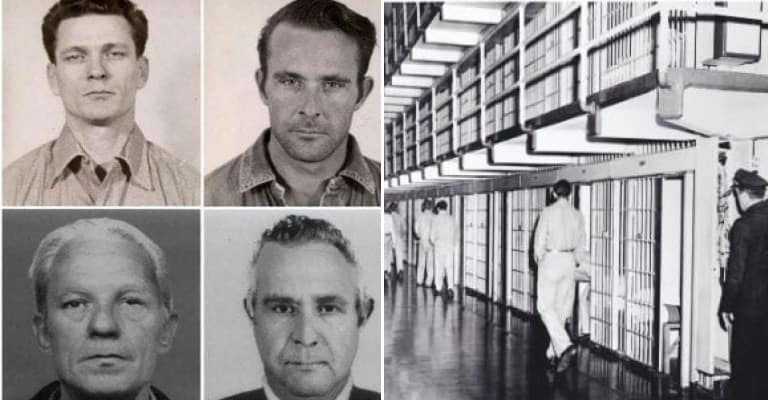 16 Steps These Criminals Took To Escape The Notorious Alcatraz Prison

Pretty quickly, the would-be escapees realized that chiseling away through rusted metal and crumbling concrete was a rather loud undertaking. Seeing as they couldn’t trust other prisoners with the secret that they were planning an escape, Frank Morris – ever the mastermind – came up with an ingenious solution. New reforms at Alcatraz gave prisoners the opportunity to enjoy music every evening, so to hide the sound of their instruments sawing away at metal and concrete, Morris played his favorite instrument: the accordion. The noise was so loud that no one could hear over it to ascertain what West and the Anglin brothers were doing.

Altogether, Morris definitely had a knack for solving problems and throwing people off the trail of what they were doing. He was far from your typical career criminal – the man was an absolute genius, and he used his intellect to aid his life of crime. He probably wasn’t the most popular guy in the big house, in any case. Imagine how peeved all of the other inmates had to have been at him for hammering away at the accordion for three or four hours every evening! The accordion would prove instrumental in other aspects of the escape, including inflating the rudimentary life raft that the men sewed together.

The metal air shafts that the men sawed through were 6 x 9 inches, so there was no way that they were going to fit through them. Once they took out the air shafts, they began working on the concrete wall around it. Every night, they replaced the wall that they had chiseled through with cardboard so that no one would be able to see what they were doing. Once they got through the air shafts and out of the fortress-prison, they would have to get across San Francisco Bay. To accomplish this impossible feat, they managed to acquire upwards of 50 raincoats. These raincoats would be sewn together to form a makeshift raft.

Seeing as the men had spent many time sewing clothes for the brave boys in the military while serving time at various prisons, all of them knew how to use a needle and thread. Once they were able to get through the air vents and into the walls, they set up shop and went there to work every evening. They sewed together all of the raincoats before vulcanizing the seams with the steam from pipes inside the prison walls. They got the idea from a Popular Mechanics magazine. To inflate the raft, the plan was to use the air from Morris’ accordion. They were regular McGyvers.

Another problem that the escape artists had to solve was hiding the fact that they were inside the prison’s walls instead of asleep in bed. They had to be inside their workshop for hours at a time to assemble things like their raft, and correctional officers perform routine checks at least every few hours. To overcome this challenge, they made dummies to put in their beds. The models wouldn’t be at all convincing up close, but for a guard who just wanted to check and see that there was a body in the bed, they got the job done.

The method of making the dummies came from the Anglin brothers. Every day, the men shaved and saved the hair, mixed in with shaving cream. They mixed the concoction with soap and toilet paper to make rather unhygienic papiermache heads. They topped the heads off with shavings gleaned from the prison barber and used art kits that prisoners had access to for painting the faces. Anytime they needed to head to their workshop, they strategically placed pillows under the blankets to look like bodies, then put the dummy heads at the top of their beds. The guards never caught on.

The easy part of the escape plan was getting into the air vents, where they did things like stitch together the lifeboat. They got out of their cells, but they had to get out of the entire prison in order to successfully escape. The air vents opened up into a utility corridor, which was unguarded. They scaled a series of pipes inside it to climb a full 30 feet up to the ceiling. Doing so by themselves was one thing. For the real escape, they had to do that climb while hauling a raft that weighed as much as 50 raincoats.

At the ceiling, the ventilator was screwed in. The men managed to get the rivets out and replaced them with some that they had designed out of a bar of soap. All in all, putting together the escape plan – from gathering their materials to sawing through the air ventilation shafts with Frank playing the accordion, to sewing a raft — took about six months. Soon, they would find out if their well-heeled plan would actually work. If it would, it would make all of the other prison escapes that they had taken part in look like child’s play.

On the evening on June 11, 1962, the most famous prison break in history began. The men went to their cells, put the dummies in their beds, and went through the air shafts and into the interior of the wall. At the last minute, though, Allen West had a problem: instead of using cardboard to cover his tracks, he had used cement. The entire area around the air shaft in his cell was cemented shut. After all those months of planning, all of thehard work that he had put into escaping from the Rock, he wouldn’t be able even to leave his cell.

West asked his buddies to help him, and Frank Morris came to the rescue. Unfortunately, by the time he was able to get into the utility corridor, from which he would climb to the roof and make his break, the other three men had long since left. West would be unable to survive the turgid bay waters on his own, so he returned to his cell. Instead of escaping, West got a good night’s sleep. In exchange for not being charged for his role in the escape, West cooperated fully with the investigation and proved key in helping detectives figure out how the exit had gone down.

West wasn’t going to be a part of the escape. The men had to get the raft and carry it with them up 30 feet of pipes, up to the top of the ventilation shaft. Up to this point, they had never actually opened the shaft, only loosened the rivets holding it in place. When they opened it, the rusted metal made a loud noise. The guards later reported hearing this noise, but because it wasn’t followed by anything else, they didn’t concern themselves with it. Once they were out of the shaft and on the roof, they quietly walked a hundred yards to the edge, then slid down 50 feet of pipes.

That evening was particularly foggy, making their job of getting through the guards who stood post at watchtowers easier. They quietly snuck past the guards, carrying their raft and crudewooden oars, and made their way to the turgid waters of the San Francisco Bay. Yet, that is where the trail goes cold (literally, quite cold). The FBI went on to claim that the inmates had drowned, citing a raincoat like the ones used in the prison as evidence. However, there was nothing more than circumstantial evidence. The men disappeared without a trace.

The letter mailed to the Richmond police in 2013 read, “I’m 83 years old and in bad shape. I have cancer. If you announce on TV that I will be promised to first go to jail for no more than a year and get medical attention, I will write back to let you know exactly where I am. This is no joke.” The investigators declined to announce on television, possibly because they didn’t want to play any games with an Alcatraz escapee. To this day, we do not know who wrote the letter. However, there are clues that Morris and the Anglin brothers were successful in their escape.
In December of 1962, John and Clarence Anglin‘s received a Christmas card that said, To Mother, from John. Merry Christmas.” There was no indication as to his whereabouts. However, his brother Robert claimed to be in contact with both John and Clarence, until they eventually lost touch with each other. There are plenty of theories as to what happened to the Anglin brothers, one of which suggests that they went to Brazil. Even though the FBI officially closed the case, the US Marshals are still actively looking for credible evidence as to what happened to them. They will continue searching until the men turn 99 years old, at which point they will be presumeddead.

The mysterious letter to the Richmond police claimed that Frank Morris had died in Argentina in 2008, and he had used an alias for all the years since his escape. It also claimed that Clarence had passed away in 2011. Perhaps, having lost his two brothers in arms, John Anglin had decided that he had nothing left to lose and was ready to come clean. Alternatively, perhaps an amateur was looking to get attention from the FBI and national media. We may not ever know for sure what happened to them once they left the rocky shores of Alcatraz.

Today, there are many clues that theorists point to that indicate that, contrary to the FBI’s statement, the men actually did escape. Though the FBI issued a statement saying that the waters of San Francisco Bay were particularly bad that night, independent Dutch programmers claimed that the bay would have been conducive to an escape. Even if the men did die that night, they have certainly lived on in the imaginations of plenty of armchair historians and conspiracy theorists, as well as the active investigations of the US Marshals.