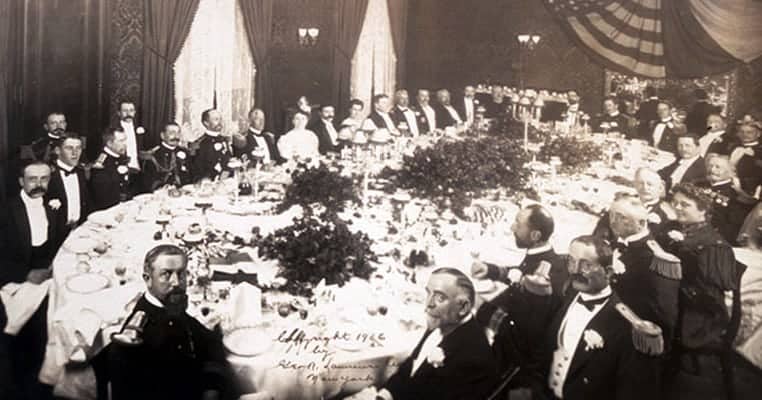 15. An Entire Village Was Purchased So a Train Could Be Rerouted

In the late 1800s, John D. Rockefeller, the famous oil tycoon who is mostly remembered for his philanthropy (even though he paid his workers pennies) bought up vast tracts of land in Westchester County, just north of the Bronx, to build his Kykuit estate. He spared no expense on the charming house, which was decorated with no fewer than 70 sculptures and ornamented with gold knick-knacks from all over the world. The entire estate sat on 3400 acres.

Not far from Kykuit, however, was a train track that was frequented by trains running back and forth from New York City. Today, people might be put off by the noise of a train, but the Rockefellers were miffed because its smoke was billowing onto the golf course. If you have more money than what you know to do with, what would you do about this problem? The family had an ingenious solution: they decided that they needed to move the train tracks so that they were five miles away. In 1929, they purchased the entire village of East View so that the train could be rerouted to pass through it.

Of course, no one was happy about having their homes taken away from them. The family went on to pay all of the people whose homes had been made more than what the houses had been worth. They ended up paying $700,000 to compensate the families, plus the expense of moving the railroad tracks.

16. Butterflies Were Shipped From Brazil for a Debutante Ball

Mary Astor Paul, undoubtedly related to the Caroline Schermerhorn Astor that ruled New York social life until the infamous Vanderbilt costume party of 1883, was a socialite of the Astor clan who was born in 1889. Her debutante ball was in 1906, towards the end of the Gilded Age. Debutante balls were formal events in which a young lady was formally presented to society; some are still held today, but they are nothing compared to the debutante balls of the Gilded Age.

Young Mary’s debutante ball was to feature 10,000 butterflies, which had been shipped all the way from Brazil to New York City just for the occasion. The idea was that they would all be released in a surprise move that would flood her guests’ senses with beauty. Unfortunately, the net behind which all of the butterflies were kept was precariously close to a lamp, and the heat was too much for the poor butterflies to handle. All of them died. When they were finally revealed and the net released, 10,000 dead butterflies rained down on the guests.

Mary went on to work in the French resistance movement of World War II to help relocate American soldiers, proving that even the rich of the Gilded Age could care about someone other than themselves.