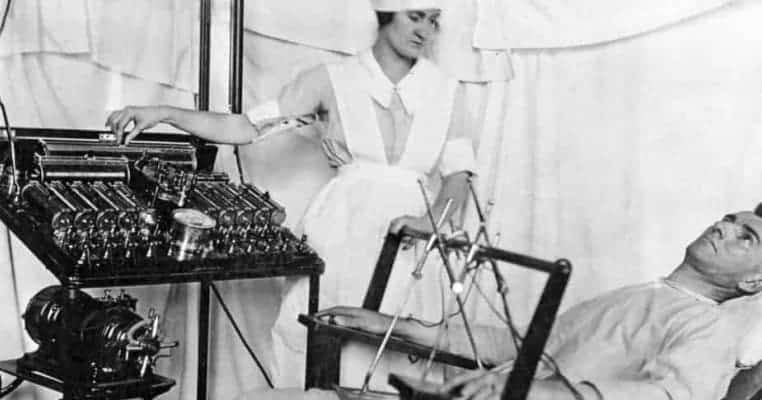 5. Electroconvulsive therapy was used throughout the mid-20th century as a treatment for mental disorders through the often forced electrocution of patients

Electroconvulsive therapy (ECT, also known as electroshock therapy or “shock treatment”) is a treatment of psychiatric disorders wherein seizures are forcibly induced in a patient by the introduction of electricity. The use of seizures in this manner was considered as far back as the 16th century and the invention of electricity was merely utilized as an easier and supposedly safe means to achieve this desired result; as early as 1755 this medical practice was employed in a rudimentary form, with Benjamin Franklin recording the allegedly successful curing of “a woman of hysterical fits” via an electrostatic machine. Introduced in its modern form in 1934 by Hungarian neuropsychiatrist Ladislas Meduna, believing the medical use of convulsive therapy was capable of curing mental disorders ranging from schizophrenia to epilepsy, Italian Ugo Cerletti adapted this work after observing the anesthetizing effects of electricity in pigs prior to slaughter; nominated for a Nobel Prize for his work, by 1940 the practice of using ECT to treat mental disorders had spread into common usage worldwide.

Although serving legitimate medical purposes still today, albeit only used in situations of informed consent and typically in instances of last resort for advanced and medication-resistant cases of severe catatonia or manic depression, ECT served to torment and abuse the mentally ill throughout the middle of the 20th century. Often forcibly applied to patients, including asylum inmates, ECT is known to have caused an abundance of complications and negative side-effects; among these are retrograde amnesia in almost all patients, affecting both short and long-term memory permanently, in addition to hypoxia or anoxia as well as potentially inducing harmful accelerations of other underlying medical disorders.

4. Liquid mercury was believed by ancient medicine to possess the powers of rejuvenation, but actually often just killed those consuming or inhaling the toxic substance

Mercury, also known colloquially as quicksilver, is a naturally occurring metallic element that atypically for a metal takes liquid form at room temperature. Dating the discovery to at least 1500 BCE, with mercury identified in Egyptian tombs, the substance has been used by almost every culture at some point throughout history ranging from Far-East Asia to the Americas; among its many uses, mercury was until recently used in thermometers and is still used today in some sphygmomanometers and electrical circuitry. Despite the intense toxicity of mercury, capable of absorption through the human skin and lethal in cases of excessive or prolonged exposure, it was nonetheless used as part of longstanding medical treatments; it should be noted that limited quantities of mercury are still used in certain medical procedures, particularly in the United States and the developing world, typically as preservatives in vaccines and as part of topical antiseptics.

Historically, ancient Chinese medicine believed that the consumption of mercury had the power to prolong life, heal injuries, and maintain vitality; in fact, the consumption of mercury does almost precisely the converse. Most famously, the first emperor of China, Qin Shi Huang Di, is believed to have died after drinking a concoction made from mercury and powdered jade which resulted in liver failure and severe mercury poisoning precipitating a complete loss of brain function; equally stupidly, Khumarawayh ibn Ahmad ibn Tulun, the second Tulunid ruler of Egypt (r. 884-896 CE), allegedly slept atop a basin filled with mercury to benefit from the presumed rejuvenative powers of the toxic substance.

3. Trepanning, wherein a hole was drilled into the human skull, was a common practice throughout the history of medicine to incorrectly treat a host of problems

Trepanning, also known as trepanation, is a surgical technique whereby a hole is drilled into the human skull, either to release built up blood pressure or expose brain tissue for operation. Believed to be the world’s oldest confirmed surgical procedure, with the earliest known examples dated to 6500 BCE in prehistoric France, more than 1,500 Neolithic skulls, representing approximately 10% of all recovered skulls from this period, depict evidence of early trepanation, strongly suggesting the widespread early use of the medical method.

Although continuing to serve a legitimate purpose in modern medicine, notably as part of corneal transplant surgery or to relieve the pressures of a subdural hematoma, the historic use of trepanning was shockingly dangerous and misguided. During the ancient era trepanning was predominantly used to treat those considered as behaving abnormally, now recognized as sufferers of epilepsy, migraines, seizures, or mental disorders, with a burr hole created in a person’s skull with the goal of releasing evil spirits trapped within responsible for said symptoms; it is likely the practice was also employed as a form of emergency surgery after severe head wounds, a common occurrence due to the prevalence of blunt stone weaponry at the time. Similarly, trepanning is believed to have been employed by pre-Columbian Mesoamericans but at a significantly decreased rate to that of Europe; it should be noted, however, that the archaeological record in the region is complicated by the concurrent practice of skull modification performed by early Mesoamericans, making the clear identification of skull surgeries difficult.

2. Human and animal feces were celebrated for their healing properties by early doctors, believed, wrongly, to be capable of curing rather than causing illness.

Among the most disgusting, and fortunately outdated, medical treatments used throughout history, feces were recurrently used across the ancient world in the spurious belief that it possessed powerful curative properties. In Ancient Egypt, “donkey, dog, gazelle and fly dung were all celebrated for their healing properties and their ability to ward off bad spirits”, whilst crocodile dung is also believed to have been used as a form of early contraception; naturally, these uses of feces were rarely more effective than they were immensely harmful, with feces incredibly infectious and patients submitted to fecal medicine, unsurprisingly, typically developed fatal cases of tetanus.

This horrendous medical belief miraculously persisted and by the 17th century in Ireland “warm hog’s dung” was still used to treat nosebleeds, whilst famed chemist Robert Boyle allegedly treated cataracts by blowing dried and powdered human feces into the affected eye; a hundred years later Ireland was still used poop in medicine, with “the dung of an infant pulverized” a known “treatment” for epilepsy. Today, feces is, in fact, used as part of a modern medical procedure, but one founded upon real scientific knowledge: the fecal transplant, in which a donor’s leavings are inserted into a patient to introduced “good” gut bacteria in an individual unable to produce it themselves as a result of an autoimmune disease such as Crohn’s or IBS.

1. Lobotomization robbed an individual of their personality, commonly resulted in crippling and permanent brain damage, and was often performed without the consent of the patient

A lobotomy, or leucotomy, is an irreversibly and invasive neurosurgical surgery involving the severing of connections to the prefrontal cortex of the human brain. Designed to decrease the symptoms of mental disorders by “reducing the complexity of psychic life”, the true horrific cost of the lobotomy was an individual’s capacity for personality, self-awareness, or spontaneity, described, supposedly positively, by Walter Freeman as “surgically induced childhood” resulting in an “infantile personality”; at best, the operation rendered a person severely brain-damaged, with a restricted intellectual and emotional understanding for the rest of their lives, whilst many others were permanently hospitalized and some committed suicide or died as a direct consequence of the procedure.

Developed by Portuguese neurologist António Egas Moniz, who was awarded the Nobel Prize for Physiology or Medicine in 1949 for his “discovery of the therapeutic value of leucotomy in certain psychoses”, the first such operation took place in Lisbon in 1935 on mentally ill patients without their knowledge or consent; the technique was gradually refined to avoid the need for formal surgery with the creation of the transorbital lobotomy, enabling the procedure to be carried out via the eye socket. Targeted at long-term suffers of mental illness, especially women, in the United States alone an estimated 40,000 people were forcibly lobotomized, with a further 17,000 such procedures in England, of which the overwhelming majority were non-consenting women; among these, Rosemary Kennedy, sister of JFK, was one of the first Americans to unwillingly undergo the prefrontal lobotomy at the age of 23, resulting in her permanent institutionalization due to crippling brain damage until her death in 2005.

“Haemorrhoidal disease: A comprehensive review”, O. Kaidar-Person, B. Person, and S.D. Wexner, Journal of the American College of Surgeons (January 2007)

“The Decline of Therapeutic Bloodletting and the Collapse of Traditional Medicine”, Carter Codell, Transaction Publishers (2012)

“The Use of Poop in Medical Treatments Throughout History”, Elana Glowatz, Medical Daily (October 7, 2016)

“The Lobotomist: A Maverick Medical Genius and His Tragic Quest to Rid the World of Mental Illness”, Jack El-Hai, Wiley (2005)