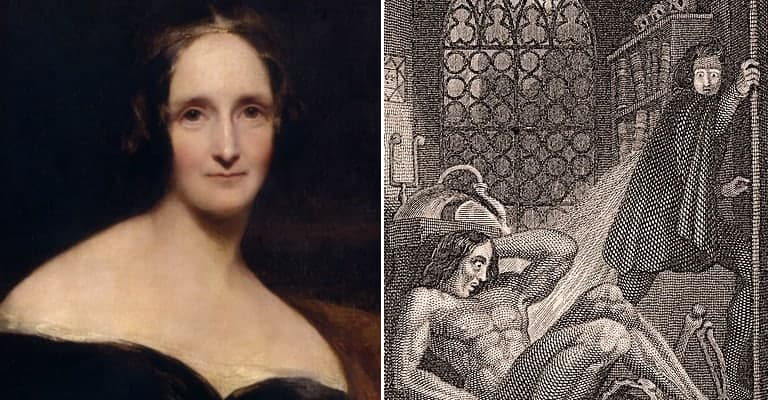 11. After Shelley’s death, many of their mutual friends turned against Mary

After Shelley’s death, Mary and her son continued to live in Italy for some time, with Marianne and Leigh Hunt, mutual friends of her and Shelley. However, Mary noticed a change in Leigh Hunt’s attitude towards her. Firstly, he refused to give her the cremated remains of Shelley’s heart. Although he had eventually relented, she noticed that he continued to be very cold towards her.

Eventually, Mary found out that Hunt had learned that, because of her depressive withdrawal, Shelley believed she no longer loved him and had accused her of coldness. The revelation at least allowed them to clear the air. However, the idea that a friend- and worst still Shelley could have believed her to be cold hurt Mary deeply. “A cold heart! Have I a cold heart? God knows! But none need envy the icy region this heart encircles- And at least the tears are hot…” Mary noted in her journal on November 17th, 1822.

Eventually, Mary moved back to England where she found some comfort at least in the company of Jane Williams, whose lover Edward Williams had also drown with Shelley. However, she quickly found out that Jane was not a friend to be trusted. In 1827, Mary discovered that Jane had been boasting about Shelley’s affection for her- and the fact he had also confided in her about Mary being an insufficient wife. ” My friend has proved false and treacherous!” Mary noted in her journal entry of July 13th, 1827, “Miserable discovery. For four years I was devoted to her & I earned only ingratitude.”

Although she maintained a friendship with Jane after these revelations, Mary never wholly trusted her again. However, it was not until 1839 that she finally reconciled herself to the fact that the friends of Shelley’s were no friends of hers. While editing Shelley’s Queen Mab for publication, she was advised to omit Part VI of the poem by the publisher- only to be vilified once again by those once so close.

“In so arduous a task others might hope for encouragement from their friends- I know mine better…” Mary noted in her journal on February 12th, “I am unstable, sometimes melancholy and have been called on some occasions imperious but never did an ungenerous act in my life. I sympathize warmly with others; I have wasted my heart in their love and service.

12. However, Lord Byron remained her supporter- and Mary immortalized him in one of her books.

One person did not turn his back on Mary. To her surprise, that person was Lord Byron. Mary and Byron had never been friends, but she found that in the wake of Shelley’s death, he could be relied upon to support her. It was Byron who forced Leigh Hunt to return Shelley’s heart to her and Byron who helped her take her mind off her grief by employing her to copy out some of his poems. Byron also negotiated with her antagonistic father in law, Sir Timothy Shelley to gain her financial support. In the meantime, Mary had Byron’s promise of financial help. “I will be your banker until this state of things is cleared up,” he assured her in October 1822.

Mary never forgot Byron’s generosity. After his death, she immortalized him in her novel “The Last Man.” Written in 1826, the novel was set in the twenty-first century in a world where humanity was being wiped out by a mysterious disease. In the book, Byron became Lord Raymond, the elected ruler of England. Lord Raymond was “Supremely handsome.” “Everyone admired him, of women he was the idol. He was courteous, honey-tongued- an adept in fascinating arts”. To complete this idealized picture of Byron, Mary had Lord Raymond resign his position before his death to go and fight for Greek independence- just like Byron.

13. Mary was disfigured by Smallpox in Paris

In April 1828, Mary went to Paris to visit a friend. However, she soon found herself feeling unwell. The illness turned out to be no trivial matter but smallpox. For three weeks, Mary lay ill with the disease. Then, finally, she recovered. However, smallpox had left its mark. Mary was only in her twenties and remained good-looking despite her grief and losses. However, on her recovery, she found that her illness had ravaged her appearance.

Many women would have hidden from society. However, Mary did not. Instead, she made the best of things and accepted social invitations- despite the scars on her face. Mary even managed to maintain a sense of humor- especially since her smallpox scars did not seem to have deterred admirers. “What will you say also to the imagination of one of the cleverest men in France, young and a poet, who could be interested in me in spite of the mask I wore, ” wrote Mary about her meeting with the poet Prosper Merimee with whom she was to strike up a close friendship. “It was rather droll to play the part of an ugly person for the first time in my life, yet it was very amusing to be told- or rather not to be told but to find that my face was not my fortune.”

Unlike many sufferers of smallpox, Mary’s scars were not permanent. However, while the marks faded, her complexion never fully recovered and the famous pale luminosity so many had remarked up was gone forever.

14. Despite Frankenstein’s success, Mary gained very little financially. However, she kept on writing.

On Mary’s return to England, she was pleased to discover Frankenstein was a great success. The book had been well received by the press and public. It had even been turned into a play: Presumption or The Fate of Frankenstein by Richard Brinsley Peake. In total, Mary’s profits from the early editions of the book amounted to forty-one pounds, thirteen shillings, and ten pence. However, as Mary gave most of her earnings from Frankenstein to her father- as well as the proceeds from her novel Valperga, she did not make much money from her creation’s success.

Valperga was just one of the many novels and stories Mary wrote in Italy before Shelley’s death. The novel, which centered on Casruccio Casttracani, an Italian soldier of fortune was Mary’s way of capturing the Italian landscape in words instead of images. Others stories included Valerius the Reanimated Roman, a tale of a Roman brought back to life in Mary’s day and Mathilda, a novel about a young woman with a troubled relationship with her father.

However, once back in England, Mary’s writing was essential to her and young Percy’s economic survival. Sir Timothy, Shelley’s father, had finally, grudgingly given her an allowance of £200 a year- to be paid back to his estate after his death. So Mary had no choice but to supplement this money by writing articles for periodicals such as The Westminster Review and short stories for an annual called The Keepsake. Mary also continued to write novels. After The last Man, Mary she published three: The Fortunes of Perkin Warbeck in 1830, Lodore in 1835 and finally Falkner.

In 1824, after her return to England, Mary was introduced to American songwriter and actor Howard Payne. Payne was the writer of the popular song “Home, Sweet Home.” Six years older than Mary, he was instantly smitten by her and attempted to woo her with books and theatre tickets. Mary enjoyed Payne’s company. However, she wasn’t interested in him romantically.

In 1825, Payne plucked up the courage to declare his feelings and propose. ” You are perpetually in my presence,” he told her, “If I close my eyes you are still there and if I cross my arms over them and try to wave you away, still you will not be gone.” Despite Payne’s poetic words, Mary declined. However, she let him down gently, by claiming that the woman he loved was nothing but an illusion. Payne accepted his rejection with good grace. The couple remained friends even after he returned to America in 1832.

Mary was however interested in another American, the American writer Washington Irving. Nothing came of this fancy, for in truth, Mary was not interested in marrying again. As she explained to her old friend from her days in Italy, Edward Trelawney: “Mary Shelley shall be written on my tomb- and why? I cannot tell, except that it is so pretty a name that though I were to preach to myself for years, I never should have the heart to get rid of it.”

16. After Mary’s death, her son found she had kept a strange memento of his father in her writing desk.

In 1826, Percy Florence’s half-brother, Charles died of tuberculosis. Percy was now Sir Timothy Shelley’s heir- and inherited the baronetcy from him in 1844. Mary had the satisfaction of seeing her son married and settled comfortably. The last years of her life were spent living in comfort at Field Place, The Shelley’s ancestral home. Those last years, were, however, plagued with illness. Finally, in February 1851, Mary died at the age of 53. She was buried with her mother and father who were moved from St Pancras graveyard to St Peters church in Bournemouth, so they were near to Sir Percy and his wife’s new home.

After his mother had been dead for a year, Percy Florence finally decided to open her portable writing desk. Inside he found various sentimental mementos of Mary’s life. There were locks of her dead children’s hair, one of the notebooks she had shared with Shelley and a copy of his poem Adonais. One of the pages of the verse was wrapped around a silk parcel. When he opened the package, Percy Florence found he was holding the charred remains of his father’s heart.