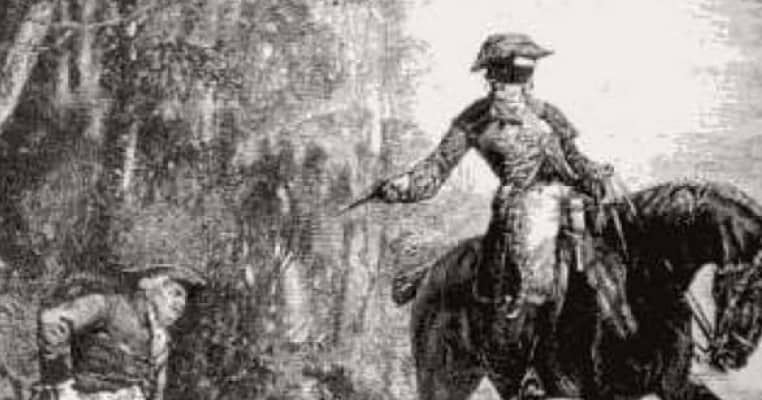 By the early nineteenth century, highway robbery began to die. However, some still tried their luck on the road- probably because if caught, offenders were more likely to be transported than hung. The last man executed for highway robbery was James ‘Robber“ or “Robert‘Snook, who met his end on March 11, 1802, on desolate Boxmoor Common in Hertfordshire. On May 10, 1801, Snook stole six leather bags of letters and bank and promissory notes from the mail coach. Theft of the post was a serious offense because it threatened “the commercial interests to the country.” Sothe Postmaster General added a £200 reward to the standard £100 offered by the Parliament for the apprehension of highwaymen.

It was a broken saddle girth left behind at the scene of the crime that several people had seen Snook trying to mend earlier that day, that identified Snook as the thief. He was captured during another robbery, and convicted because he used one of the stolen banknotes to purchase some cloth. Snook was sentenced to hang. He met his end bravely. While taking his final drink at a local pub, he joked with spectators hurrying to see him die “Its no good hurrying-they can’t start the fun until I get there.”

In 1816, twenty-year-old Michael Martin of Conahy, County Kilkenny had a chance encounter that changed his life. Martin met a man he thought was an Anglican vicar in a pub. The pair got drunk together and the ‘vicar‘ coaxed Martin‘s life story from him. The next morning, the vicar revealed himself to be none other than John Doherty, aka Captain Thunderbolt, Ireland’s most famous highwayman. Doherty was impressed by Martin’s exploits and his apparent resourcefulness and offered to take the young man under his wing. So Martin adopted the name “Captain Lightfoot” and took to the road with Doherty.

However, after three years there was nowhere left to hide. In 1819, the pair separated, and Martin boarded a ship for a new life in America. Martin tried to turn over a new leaf. However, when he found himself in debt, Captain Lightfoot returned to the road. Lightfoot’s enjoyed many American adventures, including escaping with his life from twenty Native American braves after he robbed their chief. He even reset his own dislocated his shoulder in a barn using his cravat and suspender while fleeing a mob after his final robbery in Medway. However, on this occasion, he was caught and in December 1821 became the last man to hang for highway robbery in New England.

1. ‘Mad’ Dan Morgan: The Unstable Australian Bushranger who held up landlords and helped their employees.

“Bushrangers” were the highway robbers of the Australian outback and Mad Dan Morgan was one of the most notorious. In 1860, Morgan absconding from a ticket of leave after being released early from a twelve-year sentence for highway robbery. He headed into the bush and began work as a station hand. However, Morgan just couldn’t stick at honest work. In August 1860, he stole a horse from his employers and escaped into western New South Wales where he began his criminal career in earnest, robbing bush stations and coaches.

By 1864, Morgan had a £1000 price on his head for the murders of Henry Baylis, a police magistrate, police Sergeant, David Maginnity and overseer John Mclean. However, Morgan‘s victims were usually exploitative landowners. Morgan delighted in forcing them to make amends to their workers. However, he was also erratic and unstable, and just as likely to kill his victims on a whim as he was to toy with them. It was this behavior that earned him the name “Mad Dan”. Mad Dan‘s reign of terror ended in 1865 when he was shot from behind while fleeing a botched robbery at the Peechelba Station near Wangaratta, Victoria. After his death, ghoulish souvenir hunters harvested his characteristic long black locks and beard.

The Newgate Calendar: Comprising Interesting Memoirs of the Most Notorious Characters Who Have Been Convicted of Outrages on the Laws of England Since the Commencement of the Eighteenth Century; with Occasional Anecdotes and Observations, Speeches, Confessions, and Last Exclamations of Sufferers, Volume2, Andrew Knapp and William Baldwin, J Robins and Company, 1825

Watling Street: Travels Through Britain and Its Ever-Present Past, John Higgs, Hachette UK, 2017