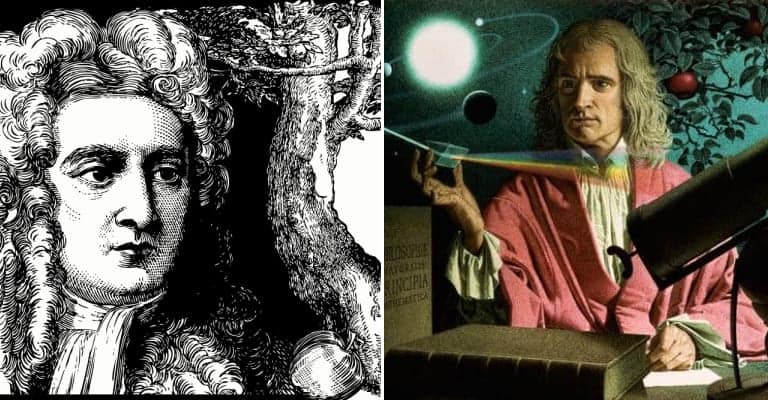 12. Newton’s concentration was such that he often forgot to eat and sleep

Newton demonstrated powers of concentration which served to make him in many ways the prototype of the “absent-minded professor” of later ages. He often breakfasted on the cold dishes which had been set out for him as his supper the night before, having been so deep in thought throughout the night that he forgot to either eat or sleep. Late in life, he told his half-niece that during his days at Cambridge his cat had become fat through eating the meals which sat on his side table as he worked on some problem or another, unnoticed by him. On being reminded of his meal sitting unattended, he would often take one or two bites of the repast while standing, before being drawn away again by whatever was occupying his attention, according to his secretary at Cambridge.

John Locke, who like Newton was a Fellow of the Royal Society, once wrote that though he considered Newton a friend, he was concerned that he was difficult at times to deal with, “and a little too apt to raise in himself suspicions where there is no ground”. This and similar observations by contemporaries and later biographers led to Newton being described as withdrawn and forgetful due to a disturbed mind, afraid to engage in social activity because of a suspicious and paranoid personality. His fears of criticism led to his delays in publishing much of his work until they were overridden by the fear that another would receive the credit for his discoveries. At his death, much of his work remained unpublished.

13. Newton answered criticism with acrimony as much as he did with reason

When Newton’s thoughts and discoveries on the nature of light were published he received criticism on both his theories and his lack of acknowledging the contributions of others on which he had relied to form his conclusions. The failure to acknowledge contributions from others was a frequent accusation directed at Newton throughout his career. When John Flamsteed, an English astronomer whose work had been used by Newton while forming his postulations on gravity, complained that Newton had failed to properly cite his contributions it started a long quarrel between the two scientists. Flamsteed complained in writing to another member of the Royal Society.

Flamsteed’s complaint was that Newton, in arriving at his conclusions over gravity, had “used the ore he had dug”. Newton responded with a comment along the lines of if Flamsteed had dug the ore it was he (Newton) who had formed the useless rock into a gold ring. Still, the comments must have stung Newton, for he began to exhibit an aversion to publishing his work, despite his promises to support the Royal Society by diligently doing so as regularly as possible. Newton once wrote to Leibniz of his hesitation to publish (before their quarrel), “â€¦I conceive myself to have discovered the surest of explanations, but I refrain from publishing books for fear that disputes and controversies may be raised against me by ignoramuses.” Newton was referring to his discoveries of the properties of light.

14. Newton was undistracted by the arts

Isaac Newton acquired a library of 1,896 books by the time of his death, none of which were the works of Geoffrey Chaucer, Edmund Spenser, or William Shakespeare, though copies of two of the latter’s works, Hamlet and The Tempest, were in his collection. He did own copies of epic poems by John Milton, but referred to poetry itself as “ingenious nonsense”. According to William Stukeley, Newton once admitted to attending an opera, and said of it, “The first act I heard with pleasure, the second stretched my patience, at the third I ran away”. Once when listening to a harpsichord being played by Handel, Newton had no comment about the music. Instead, he observed the mechanics of the musician’s hands as he played.

Perhaps because of his avoidance of the arts Newton’s interactions with peers were curtailed. He was unable to join in the discussions in drawing rooms and parlors of the latest book, the latest play, the latest composition because he had not read, seen, or heard them. Already inexperienced in the social grace of conversation, his lack of knowledge would have made him appear uninformed and possibly even ill-bred in that time of class distinctions. In his publications, and even in his private letters Newton’s writing was spare in its use of adjectives and other tools of the writer. Newton’s indifference to the arts did not extend to landscaped gardens, one of which he meticulously kept while at Cambridge.

15. Newton has been described as being a hypochondriac

Isaac Newton, other than the period in which he suffered a breakdown during his alchemy experiments, lived a long and relatively healthy life, with few periods of sickness noted in his letters and those of his contemporaries. Yet he was described by many supporting the idea of mental health issues affecting him as suffering from hypochondria. The accusations are based on Newton’s alchemy experiments, in which he also mixed various medicinal potions along with his search for the elixir of life, and his reliance on a balm of the day known as Lucatello’s Balsome, which promised relief for many ailments, including measles, dog bite, and the illness for which Newton allegedly took it, consumption.

Newton did write of being confined to his, “Chamber by a cold” at one juncture, though he was about his business again within a week and it would be improbable that during such a long life he would not have suffered many colds, especially given the knowledge of medicine and contagion at the time. The use of such balms and nostrums was commonplace during Newton’s lifetime. If Newton did believe that he had consumption there are no records of his consulting a physician for relief, nor of him participating in the taking of healthful waters then believed to relieve the condition.

16. He was a solitary and reclusive, preferring his own company to that of others

Over time, Isaac Newton developed the personality which led him to prefer to be alone, avoiding social contacts except when necessary for the advancement of his work. In his writings and those of his contemporaries, he exhibited little in the way of a sense of humor, and he did not easily share his achievements with others by making note of their contributions. He did not express his emotions other than in bursts of anger; other feelings remained under strict self-control. He did not speak or write of his own desires, and the only indications of his possessing a sense of remorse were in the lists of “sins” he prepared for himself while in his youth.

He was not free from a sense of sexual desire, since he wrote of the means to control it, and thus remain chaste, a condition in which he apparently remained throughout his life. “The way to chastity is not to struggle with incontinent thoughts but to avert the thoughts by some imployment (sic), or by reading, or by meditating on other things, or by convers”, Newton told a relative late in his lifetime. The only record of any potential romantic involvement was an adolescent one, before he began his academic career. Probably the best description of Newton’s personality comes from Humphrey Newton, who served as his secretary for a time at Trinity College. “His behavior was mild and meek, without anger, peevishness, or passion, so free from that, that you might take him for a stoic.” But clearly, he was not without his demons, as human as are all.

“Balancing Newton’s Mind: his singular behavior and his madness of 1692-93”. Milo Keynes, Notes and Records, The Royal Society Journal of the History of Science. September 20, 2008

“Newton and the Counterfeiter: The Unknown Detective Career of the World’s Greatest Scientist”. Thomas Levenson. 2009

“Notes In Which Isaac Newton Sought to Unlock Secrets Of Bible Sold At Auction”. TOI STAFF, Times Of Israel, 13 December 2020

“The Personality of Isaac Newton”. Milo Keynes, The Royal Society. 1995

“Why Was Isaac Newton Such a Jerk?” Stephen Ross Pomeroy, Forbes Online. November 4, 2013

“In the Presence of the Creator: Isaac Newton and his Times”. Gale Christianson. 1984