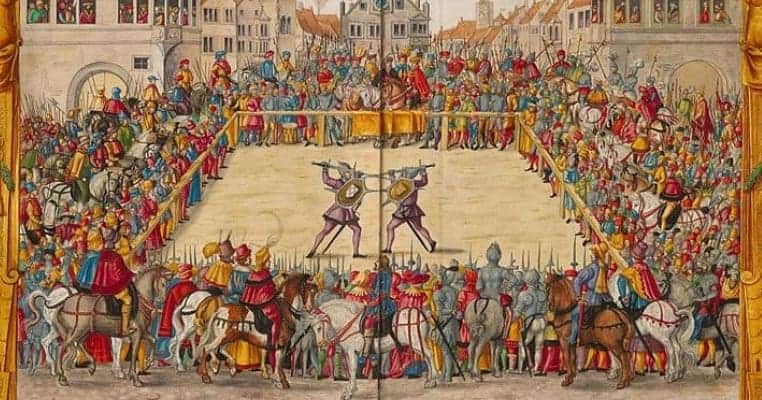 8. Trials By Combat Were Public Events

In a time without cheap or readily available books, little available artificial light by which to complete hobbies, and grueling daily life of war or farming it is perhaps no surprise that watching two men attempt to murder each other was a huge celebratory event that drew large crowds of spectators. Trials by combat were, in fact, considered community events and notices would be posted in the local newspaper announcing the time, date, location and the name of the combatants. People from all over the area would assemble to witness the fight, which could last as long as 24 hours and provide an entire day of free entertainment.

Watching trials by combat is part of what is called bloodsport, a type of entertainment that involves bloodshed. Other notable historical bloodsports include the Roman gladiator battles, bull and bear baiting, dog fighting, and cockfighting. In modern times, boxing and mixed martial arts fights are typically considered bloodsports. Animal fighting has mostly fallen out of favor throughout much of the world but is still practiced, usually through bull baiting and cockfighting, in some areas. While it isn’t generally a significant aspect of society today, bloodsport has been an incredibly common and a favorite part of various cultures throughout history.

7. Some People Weren’t Allowed to Fight For Themselves

The Viking Holmgang is one of the few systems of trial by combat that allowed men of any social status and occupation to challenge another. Most Germanic systems of the practice had some regulations on who could and could not offer challenges and fight. Members of the clergy widely refused the method and instead were offered the ordeal of the cross. In this ordeal, both the accused and the accuser must stand against a cross with the arms raised in the position of Jesus’ crucifixion. Whoever lowered his arm first was declared guilty or the loser of whatever property was in question.

In many Germanic systems, serfs and slaves were not allowed to challenge men of higher social status as trial by combat was a right of free men. Disabled and elderly men were permitted to issue challenges, but not to fight for themselves as it was clear they would be unable to compete for their case adequately. Women were, in all cases, barred from fighting in them, even in the more progressive Viking holmgang system. Women had far less legal recourse in situations where they were accused, most often of adultery or witchcraft, and would most often, at best, have to survive an ordeal, especially in cases of supposed witchcraft.

6. Professional Champions Could Be Hired

In Game of Thrones the dwarf Lannister, Tyrion, hires Oberyn to be his champion in a trial by combat. A move like that is actually quite historically accurate, as Tyrion would have been considered disabled and thus unable to fight. In fact, in some Germanic law systems, even able-bodied men were allowed to hire professional champions to compete in their stead. However, hiring a professional was often viewed as dishonorable. Contemporary writings often referred to the hiring of professional combatants as something done by, “Women, the young, the old, the sick, the crippled, clerics, and Jews.” Medieval anti-Semitism aside, it was clear that society at the time looked down on not fighting for one’s cause.

Professional combatants were similarly disparaged. Although they were able to make good money fighting on behalf of other men, they were viewed as dishonorable and the lowest of society. Oberyn was treated similarly by most of the nobles in Game of Thrones, with few being impressed by his history as a profoundly successful professional champion. Although he was able to defeat a storied knight successfully, he was still a “sellsword,” an honorless mercenary. Much like the later distaste for mercenary companies, men who sold their military skill on behalf of others were viewed with mistrust.

5. Arenas Were Built to House Spectators

In the early days of trial by combat, the fighters would battle on a public green on a piece of measured leather that dictated the field of combat. However, as the popularity of public trials grew cities began to build more and more elaborate stages to house spectators. These arenas allowed the higher ranking members of a community to have a bird’s-eye view of the carnage, while poorer seats were reserved for lower status witnesses. In England, arenas became known as ” the lists” a term associated with later jousting practice in which knights attempted to join “the lists.”

The same rules applied within these platforms and the fighting was mostly unchanged; it merely created a more magnificent public spectacle around the fights. Presumably, some cities charged admission to the new arenas, and one can only imagine that enterprising merchants found ways to sell snacks and trinkets to the gathered crowds. When one envisions a circus or outdoor concert, packed with barkers selling t-shirts, posters, beers, and so on, it isn’t far off from the packed, jubilant affairs that were medieval trials by combat.

Game of Thrones depicted its most infamous trial by combat in a rather David versus Goliath looking manner with a hulk of a man in iron armor fighting a smaller, faster, and more intelligent man in simple leather armor. Despite being entertaining, such disparities in armor and weapons would not have been allowed in medieval trials by combat. Strict rules dictated not only the weapons allowed, the size of the fighting area, and other practical matters but included rules on matching combatants in terms of skill, size, and weaponry used. No fair fight would allow one man on horseback with a halberd and another on foot with a dagger. Since the winners were believed to be divinely favored, it would have been unjust bordering on heresy to stack the odds in favor of one combatant.

In the event of a disabled or elderly man being unable to fight, a professional combatant would be provided or purchased, depending on the circumstance and status of the man in question. If one combatant hiring a champion, the other combatant would be given a similar opportunity to procure a winner if they felt they wouldn’t be evenly matched against a professional fighter. Trials by combat had the equivalent of referees who inspected and approved armor and weapons before the fight began to ensure fairness.

In a highly religious era, the victor in trial combat was believed to have been chosen by God in his righteousness. It also very conveniently protected the referees and winner of a trial from any accusations of cheating, wrongdoing, etc. since that would be tantamount to questioning the judgment of God himself. In practical terms, the men of the era believed the god would not let an innocent and virtuous man die, so it would be impossible for the wrong man to be killed in a trial by combat.

Of course, in practice, this is incredibly far from the truth, and likely many medieval men died who were genuinely innocent due to lack of martial skill, bad luck, cheating, or any combination of the above. It was these arguments of the lack of real justice that ultimately led to the practice being outlawed throughout Europe in the 17th through 19th centuries. It is also likely why the method never caught on in my areas, with the practice being unheard of in Anglo-Saxon law before the Norman Conquest, in Islamic law and throughout much of the rest of the world. Even many medieval lawmakers felt that stabbing or bludgeoning your fellow man to death wasn’t a great way to prove your worth as a person.

2. Combat Ended After 24 Hours or An Admission of Defeat

While many trials by combat began on horseback, they often ended with two exhausted, unarmed man scrabbling on the ground. Horses were often killed early in the fight by long weapons such as spears. Once horses were removed from the battle, knights would wield swords while ordinary men often used staves, clubs, and crude maces. Anyone who has ever swung a real sword knows how incredibly heavy they are to the untrained arm, and how exhausted one gets after swinging one repeatedly – especially in a life or death scenario!

Given this tiring work, many men often threw down their weapons at some point during the fight, too exhausted to keep swinging them accurately or effectively. In times like these, men turned to fist-fighting or wrestling. Trickery became a more critical part of fighting at this point, as illustrated in the 12th century Flemish case where a knight played dead to lure his opponent into letting his guard down, at which point he beat him to death. If a combination of brutality and trickery didn’t end the fight within 24 hours, the defendant would be declared innocent, and the accuser would be labeled “infamous” and lose many of his rights.

1. Defeated Defendants Were Maimed or Killed

There were only three ways for a trial by combat to end: 24 hours of survival of both parties, one party saying the word “craven” to admit defeat or one of the participants being killed or rendered unable to fight. In cases where a man yelled craven, he would be labeled “infamous” which was a mark of incredible dishonor that carried with it penalties including the loss of many of the rights of a free man, including property ownership. This concept applied to the accuser as well as the accused.

If a combatant were knocked unconscious or otherwise unable to finish the fight but did not die, the losing combatant would be swiftly punished. In severe cases where a man accused of a serious crime was wounded but did not die, he would typically be hanged immediately after the end of combat. In less serious cases, a hand would be cut off, and their property seized. Indeed, this was a deeply unpleasant system of justice. If you wanted to accuse someone of a crime, you had to be willing to stake your life on it physically. If you were wrongly accused, you similarly had to stake your life on it, and even if you weren’t outright killed you still might end up facing the death penalty for a crime you didn’t commit.

“Trial By Combat Was Real – And Way Worse Than â€˜Game of Thrones’ Portrayed It” Donn Saylor, Ranker. n.d.