Moving Images of Dresden, Germany Before and After Allied Bombs Annihilated the Historic City 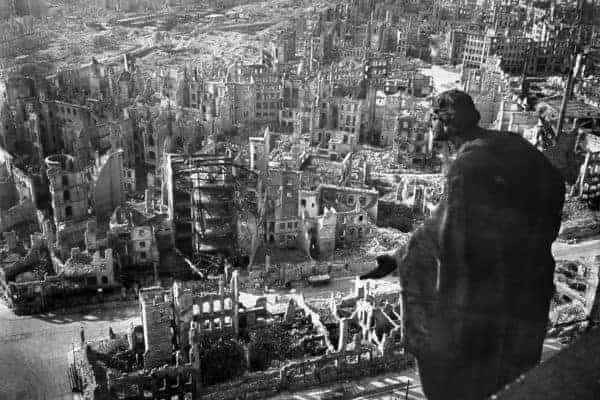 Moving Images of Dresden, Germany Before and After Allied Bombs Annihilated the Historic City

In the final months of World War II, British and U.S. bombers pummeled the city of Dresden, Germany. Once called “Florence on the Elbe,” in two days, time the city was reduced to ash.

Dresden’s beginnings trace back to Neolithic and Slavic tribes who settled along the clay-rich banks of the Elbe River, where pottery was produced since 7500 BC.

By the early 1900s, Dresden was Germany’s seventh-largest city. When it was attacked by British forces on February 13, 1945, inclement weather prevented the United States Army Air Force (USAAF) from taking part in the first scheduled strikes. Instead, the Royal Air Force (RAF) was sent in to carry out raids.

On February 13-14, 1945, American and British forces began a massive bombing in Dresden that continues to be a controversial subject to this day. The two-day attack was done entirely by air and it annihilated the city, leaving large swaths utterly unrecognizable and the history of Dresden in ruins. Over 1,200 heavy bombers were used in the attack. They dropped nearly two tons of bombs on the city – leaving only a small portion of the city center intact.

The way attacks were carried out and the sheer number of the bombings resulted in large-scale destruction. A massive number of raids were scheduled every three hours. They were timed to interrupt emergency services, just as fire trucks and ambulances were deeply entrenched in their efforts to save the city and its people, more air strikes would arrive.

A classified report released decades after the war’s end cited the targets consisted of 110 factories that were thought to be supporting the war effort: building aircraft parts, poison gas, guns, and other supplies. It was estimated that 50,000 workers were stationed at the factories.

Germans questioned whether or not the bombing was necessary. After the attack over 90 percent of the city center was destroyed.

Widespread destruction resulted in roughly 25,000 deaths – the exact number of causalities is the subject of dispute. So much of Dresden was destroyed, it has been argued that the number of those killed is much higher. Over the years, the bombing of Dresden has been compared to the Holocaust as a crime against humanity.