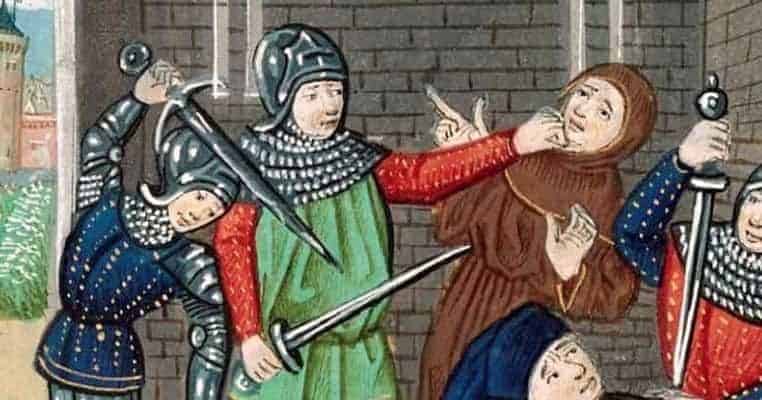 Though he sent the rebels packing with their tails between their legs, Richard knew that order was not yet restored. He heard of trouble stirring across every south eastern county and beyond (see above), and the very night that Tyler died (15th June), he formed a commission of seven men to hunt down, try, and execute horribly all wrongdoers within a 70-mile radius of London. To William Walworth, one of the committee, Richard gave explicit permission for him to punish the guilty ‘by beheadings and mutilations of limbs, as seems to you most expeditious and sensible’. Walworth did not disappoint.

The widespread and cruel violence of the Great Revolt continued: only the identities of the perpetrators had changed. Richard’s far-flung, draconian vengeance drew censure for its severity from his subjects, according to the Westminster Chronicle: ‘the populace shuddered at the spectacle of so many gibbeted bodies… despite all the retribution visited on the guilty the severity of the royal displeasure seemed to be in no way mitigated but rather to be directed with increased harshness towards the punishment of offenders… it was widely thought that in the circumstances the king’s generous nature ought to exercise leniency rather than vindictiveness’.

Even in the face of this, when it became abundantly clear that Richard had no intention of honouring the promises he made at Mile End, rebels from Essex sent messengers to the king, asking him to ratify the charter of liberties he had promised. Richard’s response was uncompromising: ‘villeins [feudal tenants] you were and villeins you will remain: in permanent bondage, not as it was before, but incomparably harsher… we shall strive… to keep you in subjection, to such a degree that the suffering of your servitude will be an example to posterity’. The last Essex rebels were soon executed.

In all, thousands of people met extremely cruel deaths between July and November 1381. Many were killed simply on the evidence of hearsay. However, although the Great Revolt may have ended in misery for the commoners, the next parliament in November 1381 demanded reforms of the king’s household, including the presence only of ‘good and worthy people’, and a limit to how many guests he could entertain so that ‘our said lord may live honestly within his own means from now on, without charging his people as has been done before’. Perhaps the rebels were right, after all.