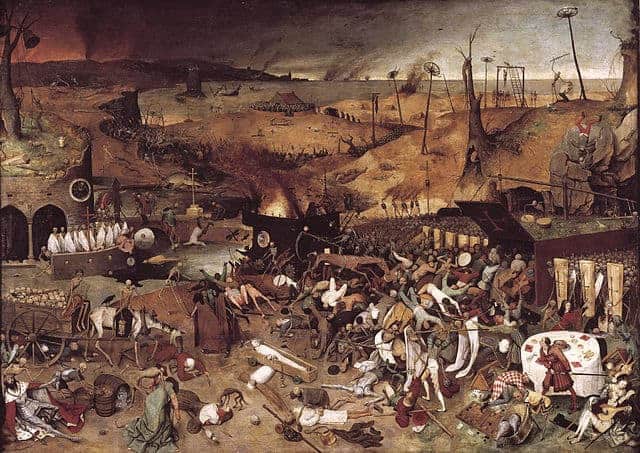 The Development of Quarantine

In 1348, in an attempt was made to understand the plague and its causes, The Paris Medical Faculty published a scientific account of the plague. They attributed the ultimate cause of the plague to “the configuration of the heavens” which led to a “corruption of the air” rather than any earthly causes. Erroneous as this was, the report did note the link between the increased wet weather and the warmer winters which perpetuated the disease and how cold, hard winters tended to destroy similar infections.

With no clear understanding of the origins of the plague, it was impossible for doctors to formulate an effective treatment. Remedies varied between bleeding and purging patients. If these did not finish off the afflicted, physicians attempted cool their humors with herbal treatments and then lance the buboes. For centuries afterwards, people survived plague due to luck or natural resilience rather than any medical advances. However, there was one aspect of plague management that underwent a complete revolution because of the Black Death: the measures which European society took to prevent the spread of infectious disease.

There were several, less prolonged outbreaks of plague in the years immediately following 1351. However, rather than sealing up the sick within towns in their individual houses, the idea of mass isolation began to develop. In 1374, during an outbreak of plague in Reggio, Italy, the town’s ruler Viscount Bernabo ordered that everyone suffering from plague be taken out of the town to the fields to either recover or die. Around the same time, this same idea was suggested by the chief physician of the Croatian port of Ragusa (Dubrovnik), Jacob of Padua, who established a place outside the city walls for all affected townspeople and outsiders.

In 1377, Ragusa took this method of isolation one stage further. The town council passed a law establishing the Trentino, a thirty-day isolation period during times of plague. The Trentino required all those coming from known areas of plague to spend 30 days in isolation before they were allowed to enter the city. During that time, only designated individuals were allowed to enter the restricted area. Anyone who entered without authorization was forced to join it.

The idea worked and over the next 80 years, spread across Europe with Marseilles, Venice, Pisa and Genoa all adopting the Trentino – butin an amended form. For instead of isolating the sick for thirty days, these cities expanded it to forty days. Whether this was from an observed need to expand the period of isolation or a religious basis based around the 40 days of lent, the Trentinobecame the Quaranta- from which the modern term of quarantine derives.

Where Do we get this stuff? Here are our sources?

“Oh father, Why have you abandoned me?” Samuel Cohn, History Extra, June 2018

The Black death and the transformation of the west, David Herlihy, Harvard University Press, 1997.