10 of the Greatest Minds of History 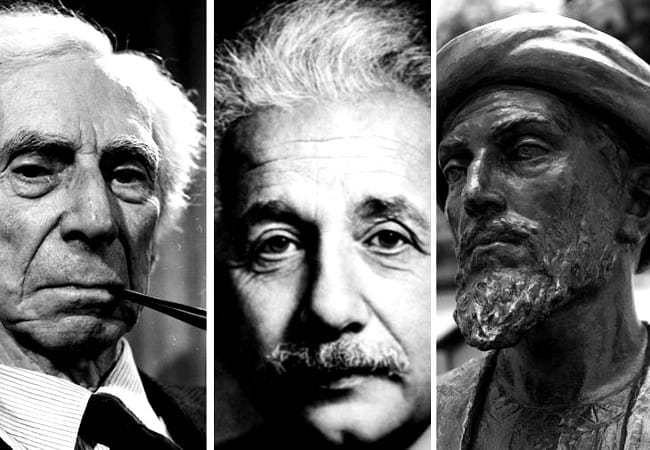 10 of the Greatest Minds of History

Bertrand Russell, from the English school of clever chaps

The Stanford Encyclopaedia of Philosophy describes Bertrand Arthur William Russell (1872-1970) as ‘a British philosopher, logician, essayist and social critic best known for his work in mathematical logic and analytic philosophy.’

As usual, such dry descriptions tell only half the story. Russell himself tended to present his ideas in crisp and amusing terms, and one gets the feeling that an evening in his company would have been worth the going rate at the time. ‘The whole problem with the world.’ He once remarked. ‘Is that fools and fanatics are always so certain of themselves, but wiser people so full of doubts.’

He also was of the modern British school of philosophy, influenced by the great universities of the age, and as such his work is technical, and for the most part wholly inaccessible to the lay philosopher. He worked in the areas of logic, specifically the position that mathematics is in some important sense reducible to logic. He refined Gottlob Frege’s predicate calculus, which apparently still remains at the root of contemporary systems of logic. He championed the concept of neutral monism, which is the notion that the world consists of a single type of substance, which is neither exclusively mental nor exclusively physical. When time allowed, he explored definite descriptions, logical atomism and logical types.

You get the idea. Bertrand Russell was no polymath, but he certainly was a man of notable genius. In the course of a long career – he was ninety-seven when he died – he made notable contributions to subjects and diverse as ethics, politics, educational theory, the history of ideas and religious studies.

His great advantage, however, was that, like Voltaire, he wrote with flair and wit, and his many writings on many themes were read as much for their didactic value as their creative brilliance. He was not without controversy, however, for a man with such a powerful intellect, educated to the degree that he was, he was apt to be both supremely self-confident and entirely unafraid of stirring up heresy. He was dismissed from both Trinity College, Cambridge, and City College, New York, which was an achievement he was extremely proud of. At the age of seventy-seven, he won the Nobel Prize for Literature, and ended his days on the front line of the anti-war protests of the 1960s and 1970s. Some words of wisdom from Bertrand Russell to end:

‘It may seem to some that I care only about knowledge and reason. That is not so. I know how precarious is the foundation of knowledge in the mind of man; that each of us knows the world through our senses and that we may be deceived as to the nature of reality. But it is impossible to live without faith in a world beyond our individual sense perceptions. We cannot possess knowledge of ‘right and wrong’ but we are bound to have opinions. And we are such that reason is the mere servant of passion.’

When you think of Albert Einstein you think immediately of a clever guy. Ask a challenging question, and you might well get the reply ‘Who do you think I am, Einstein?’

Einstein belongs in this list because he is the poster child of groundbreaking intelligence, and although his theory of relativity is not quite so infallible now as it was a few decades ago, it is still the last word in what sheer mental computation can achieve if you have enough of it.

In a nutshell Einstein, born in 1879, was a German-born theoretical physicist who devised the most famous equation of all time. He emigrated from Germany to the United States, ostensibly to escape the difficulties created by his Jewish heritage. By then he was a Nobel laureate, and already highly respected in his field. As a physicist, Einstein was responsible for many important discoveries, but it was the theory of relativity, and the E+MC2 equation that cemented his reputation.

Relativity is described by dictionary.com as ‘…the modern theory of gravitation, proposed in 1915, also by Albert Einstein. The central point of the theory is the principle of general relativity, which states that all observers, regardless of their state of motion, will see the same laws of physics operating in the universe.

This would seem an obscure point to base a career, but when in possession of an intellect of such scope as his, then the world, and the universe that contains it is a more accessible place.

Einstein was also a cult figure, and a personality of popular culture. He had a touch of the celebrity about him, and his odd hair-do and his Chaplinesque persona somewhat offset the deep intellectual world within which he lived. When asked once to explain his theory of relativity, he replied, ‘put your hand on a hot stove for a minute, and it seems like an hour. Sit with a pretty women for an hour, and it seems like a minute. That is relativity!’

Leonardo da Vinci, the greatest of them all

If you run a search of the greatest polymaths of all time, and everyone from The ‘Artist Formerly Known as Prince’ to Steve Jobs will pop up as a possible candidate. However, among the handful of constants will at all times be Aristotle, Plato and Michelangelo, almost always led by the charismatic, multi-faceted genius of Leonardo da Vinci. And where do we go from here. Do you need me to tell you that da Vinci was an Italian renaissance ‘creator’, responsible for everything from the Mona Liza to early helicopter flight? No indeed, we all know that Leonardo applied his creative genius to everything from human anatomy to powered flight. In fact, it was he who gifted the world with the word ‘Renaissance Man’, a more colourful version of the word polymath.

The Bizarre thing about Leonardo is that he has left an almost empty record of his day to day life, so as a consequence not much is known about him. He was born in the hamlet of Vinci, just outside Florence. At age fifteen he was apprenticed to the Florentine artist Andrea del Verrocchio, launching the career of one of history’ most enigmatic genius. The great works of art of Leonardo were something of a by-product of his more intimate fascinations. Historian Kenneth Clark once remarked that posterity was left much poorer for the fact that Leonardo painted so little, and wasted so much time pursuing his hobbies of engineering, architecture, pageantry, military strategy, cartography, etc etc

This certain was Leonardo, but he also was a Renaissance Man in the more contemporary sense of the word. He was gay, vegetarian and extremely flamboyant, erratic in his work habits and infuriatingly difficult for anyone the, or now, to pin down. At the age of twenty-four, he was accused and charged with sodomy against a seventeen-year-old boy. A co-defendant happened to be related to the Medici family, and the whole thing was swept under the carpet.

‘Whoever does not curb lustful desires puts himself on the level of beasts,’ he once wrote, acknowledging also that his penis ‘possesses a life and an intelligence separate from the man.’

Of all of the many threads of Leonardo’s polymathy, it is in anatomy that his most detailed and brilliant work was done. With his busy intellect, he delved deeper into the question of form and proportion than any other artist of the age. ‘From the top of the ear to the top of the head is equal to the distance from the bottom of the chin to the duct of the eye.’

Of all that he did investigate and report upon, there seems to also be much that he did not have time for. A scribbled not survives reminding himself to ‘Get a master of hydraulics to tell you how to repair a lock … Observe the goose’s foot … Describe the tongue of the woodpecker.’

Of all that Leonardo neglected to do, the most tragic is that he never wrote a memoir. One can only imagine that a Leonardian journey of introspection would have been a book very much worth reading, and one that would have done away with the centuries of speculated that has come about as a consequence.

“13 Most Intelligent People In The History Of The World.” Finances Online

“The Greatest Minds of All Time.” Ranker, Walter Graves.

“Who are the women polymaths?” Quora

“The truth about Galileo and his conflict with the Catholic Church.” UCLA Newsroom, Jessica Wolf, December 2016