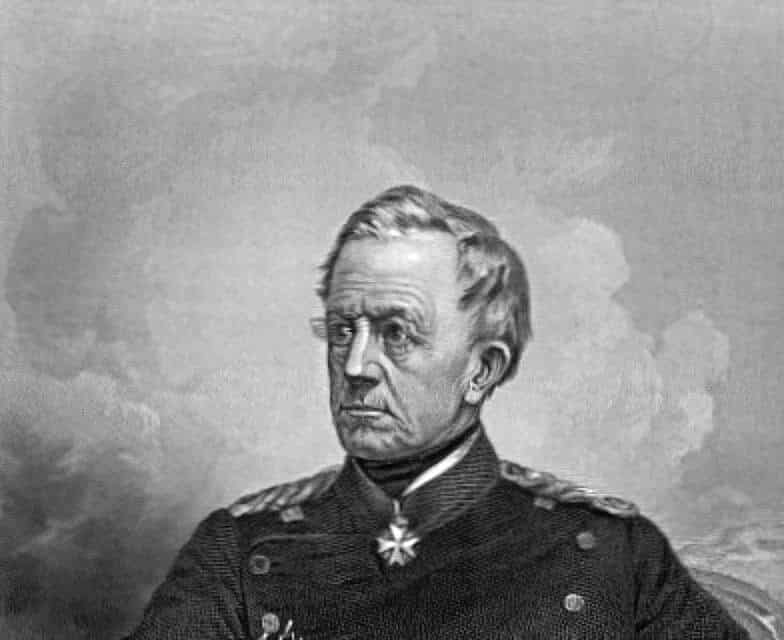 The military philosophy of Helmuth von Moltke (1800 – 1891), also known as Moltke the Elder, was to distill Napoleon’s innovations and precepts, and adapt them to contemporary conditions. An example was his realization that the defensive power of modern firearms had rendered the frontal attacks of Napoleon’s days impractical. So he focused instead on developing tactics to secure victory via enveloping attacks instead of head on assaults.

He viewed strategy through the pragmatic lens of adapting means to ends, and avoiding the pursuit of ends when the means to secure them were unavailable. He also realized that things almost never go as planned in war, and his most famous statement summarizing his thinking is “no plan survives contact with the enemy“. So he emphasized extensive preparations for all possible scenarios.

In 1857, Moltke was promoted to Chief of the Prussian General Staff – a position he would hold for the next three decades. He revolutionized warfare with his innovations to that institution, renamed the Great General Staff after the establishment of the German Empire. Moltke made the commander’s staff a professional and permanent body, and created an infrastructure to handle basic matters such as logistics and supply, transport, intelligence, and coordination. Relieved of those chores, the commander was freed to concentrate on strategy and tactics. Moltke’s Great General Staff was emulated by armies the world over, all of which eventually established their own general staffs.

Moltke was one of the first to realize that the days when a commander could exercise complete control over an army, such as occurred during the Napoleonic Wars, were over. By the second half of the 19th century, armies had gotten too big, and their fields of battle and theaters of operations had grown too massive, for an army commander to see all his forces from a command post atop a hill. In this new environment, senior commanders had to explain their intent to subordinates, then grant them autonomy and trust them to use their own initiative to realize the commander’s intent.

Instead of detailed orders, Moltke gave subordinates clearly defined goals, the forces needed to execute them, and a time frame in which the goal must be achieved. How to accomplish the goal was largely left to the subordinate’s discretion and initiative. That required a revamping of officer training to encourage initiative and independent thinking. German soldiers are often thought of as robotic automatons, but since Moltke’s day, few if any armies have allowed their soldiers as much discretion, or trusted them to use their own initiative, as much as the German army.

Moltke’s innovations made the Prussian army the world’s most efficient, as it demonstrated in a series of swift and successful wars en route to unifying Germany. After defeating the Danes in 1864, then crushing the Austrians in 1866, in accordance was plans drawn by Moltke, Prussia took on France, whose army was reputedly the world’s best. Moltke drew the plans for the Franco-Prussian War, 1870 – 1871, and led the Prussian army in executing his design. The result was a stunning Prussian victory, capped by the creation of the German Empire in the Hall of Mirror in Versailles.

One of the most original military thinkers of the twentieth century was Mao Zedong (1893 – 1976), the communist revolutionary who became the founding father of the People’s Republic of China. He literally wrote the book on the modern theory of insurgency: On Guerrilla Warfare. In it, he described a revolutionary methodology to defeat Japanese invaders, based on strategies and tactics honed during Mao’s struggle against China’s Nationalist government.

Mao developed a Theory of People’s War that divided popular insurgencies into three stages. Stage One is about winning popular support by distributing propaganda and attacking the organs of an unpopular government. Stage Two sees an escalation, with attacks directed against the government’s military forces and vital institutions. Stage Three further ratchets things up by turning to conventional warfare, and making a bid to seize the cities, overthrow the government, and seize control of the country. It was a flexible doctrine, and shifting between stages can go in either direction, depending on circumstances. And the stages need not be uniform throughout the entire country, but could vary depending on local conditions.

Mao’s insurgents fought both the Japanese and the Nationalist Chinese, and ultimately prevailed. Using small groups of combatants in raids and ambushes to defeat bigger and less mobile armies discomfited the Japanese, and eventually secured the communists victory in China. Mao summarized his revolutionary guerilla methodology as: “When the enemy advances, we retreat. When the enemy rests, we harass. When the enemy tires, we attack. When the enemy retreats we advance“. His methods became a model followed by numerous insurgencies around the world, as they fought against colonialism and oppressive native regimes.

Maosit insurgency seeks to win hearts and minds by treating the peasants with a respect that stands in stark contrast with the contempt meted them by their rulers, be they Japanese invaders or Chinese landed gentry and government officials. Revolutionaries also tied the peasants’ economic interests to the success of the revolution, via a redistribution of land, and a lifting of feudal-type dues.

As Maoists and their emulators discovered, at a visceral level, the peasants and the disadvantaged craved simple respect, even more than they craved the economic benefits promised by the revolution. They also harbored significant resentment against the upper classes who had been exploiting and contemptuously looking down upon them for so long. Such stored resentments are a powerful resource that revolutionaries should seek to tap.

After Japan’s defeat in WW2, the communists went on to win control of China in 1949, and Mao’s insurgency model and example were later utilized to great effect throughout the Developing World. The Viet Minh in particular successfully adapted Maoist methods to local conditions, and used them to defeat Vietnam’s French colonial masters. They then waged a protracted war to unify a divided Vietnam, and succeeded despite massive American support for the government of South Vietnam.