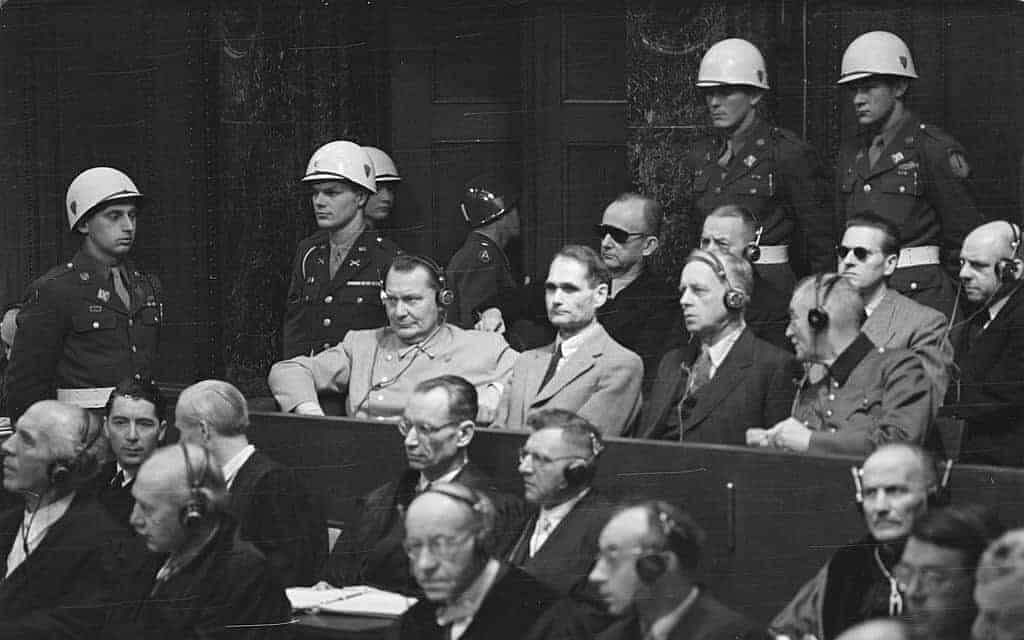 As part of the German Army’s efforts to suppress the activities of partisans and guerrilla warfare it became a practice to take hostages from among the civilian population. Hostages were executed as reprisal for partisan attacks, particularly in the Balkan countries. The Hostages Trial is also known as the Southeast Trial, because all of the accused were senior German army officers commanding units in the Balkans. During the Hostages Trial, the tribunal found that the partisans in the region were not “lawful belligerents” meaning that the protections afforded prisoners of war did not apply to them, and they could be tried and executed as criminals.

The ten accused German officers in the Hostages Trial used the defense of acting under orders from higher authority, which they were obligated to do as officers. They also pointed out that the field manuals of the British and American Army both authorized the seizure of hostages as a legitimate defense against partisan and guerrilla activity, including the execution of the hostages in reprisal for the attacks (the British manual did not specify killing the hostages, but the US Army Field Manual Rule of Land Warfare did). Despite these defenses, of the twelve accused German officers eight were found guilty of war crimes and sentenced to prison terms, one committed suicide before the trial, one was removed for health reasons, and two were acquitted.

Regarding the defense of simply following orders, the tribunal ruled that the more senior officers were in a position to recognize the illegitimacy of orders to violate basic human rights and the rules of warfare, and were thus obligated to prevent them from being carried out. The subject of the treatment of hostages in response to partisan activity as discussed in the American Field Manual was not addressed by the court, which found the execution of hostages by the Germans to be a war crime against the civilian population. The tribunal ruled that the German killing of hostages exceeded that which was considered lawful under the rule of war.

The Hostages Trial formalized the guerrilla fighters and partisans as irregulars who operated outside of the rules and laws of warfare. Since the Resistance fighters in France and elsewhere were also in this category, it made them equally subject to instant execution when captured, but French courts disagreed with this assessment and declared them to be protected by the laws of war and the Geneva convention, declaring them if captured to be prisoners of war. The French courts had an interest in protecting (and avenging) their citizens which had fought the Germans and in many cases been caught and executed for doing so.

None of the German officers convicted in the Hostages Trial served their entire sentence, and by 1953 all had been released from custody. Following the Hostages Trial the Geneva Convention was amended to extend protections to captured partisan fighters as legitimate prisoners of war. The convention required of such partisans that they have an established chain of command, carry their weapons openly, and have a distinctive and readily visible symbol of their unit. They also must carry out military activities in accordance with the conventions of warfare, rather than covert assassinations, bombings, and other criminal acts.

Summary of the Nuremberg Trials

Legal arguments over the Nuremberg Trials and the rulings which emerged from them began even as the trials were being conducted. The trials declared organizations to be illegal and members of them guilty crimes despite the membership having preceded it being declared criminal. They did not offer the opportunity to renounce membership to exonerate. Thus all defendants who appeared before the court as former members of the SS, SA, Gestapo, and other Nazi organizations were automatically guilty of at least one charge on their indictments, the guilt being decided by another court at an earlier time. There was no opportunity nor mechanism for appeal.

By the mid-1950s, all of the convicted Nuremberg defendants in American custody were released, and some pardoned. The French and British gradually released most of the defendants in their custody as well. Many of the individuals which should have been treated as war criminals were instead absorbed into the governments and industries of the allies. German scientists and engineers who developed the Vengeance weapons were spirited into the United States and the Soviet Union to work on those country’s missile and other weapons programs. At the same time the bureaucrats, military, and industrialists who supported the German rockets were convicted of war crimes.

Werner von Braun was both a member of the SS and advocated the use of slave labor building his rockets at Peenemunde. The same was true of Arthur Rudolph. Both became instrumental in the success of the United States space program and the development of intercontinental missiles. In 1984, evidence of Rudolph’s war crimes committed during the Second World War became so overwhelming that he was returned to West Germany and renounced his American citizenship. He was later granted German citizenship, never being tried for the war crimes committed during the building of the V-2.

On the other hand, Rudolph Hess remained imprisoned for the rest of his life. At Nuremberg Hess was found guilty of crimes against peace and conspiracy, but he was found not guilty of committing war crimes and crimes against humanity. Nonetheless, Hess remained in Spandau Prison – other than during hospital visits over the years – until he died by suicide in 1987 at the age of 93. Numerous efforts to release him on humanitarian grounds were initiated over the years only to be thwarted by the Soviets, who refused to consider his early release. The British too, opposed releasing Hess during his long incarceration.

While the Nuremberg Trials were being conducted, and ever since, controversy surrounded them. They were far from impartial. In many instances, Germans were tried and convicted for committing actions which were identical to those of the Allies, which were disregarded. These included the planning and execution of the invasion of Poland (in which the Soviets participated) and the execution of unrestricted submarine warfare (as did the United States in the Pacific). In the end the German admirals were not convicted of the latter, but the charge remained on the indictment, and added to the belief that in many instances the Nuremberg Trials were not solely about international justice.

“A Commentary on the Justice Case”, by Doug Linder, University of Missouri KC Law, 2000, online