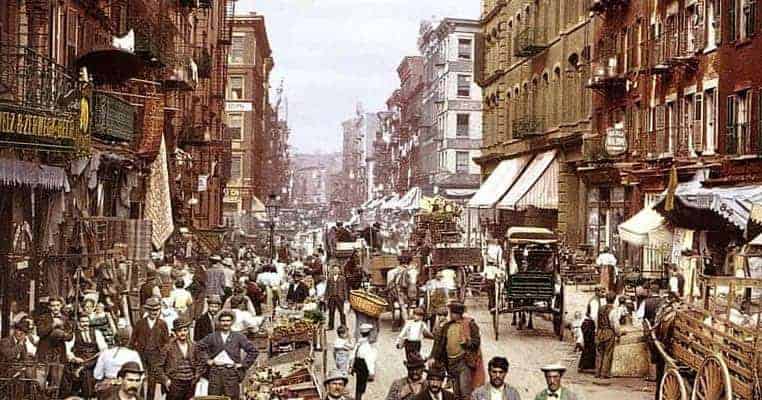 The most frequently used mustard in the United States is yellow mustard, which is usually just called mustard and is so common that consumers who desire something with more zest usually have to specify that they want Dijon mustard or whichever style is preferred. In the United States a request for mustard will usually be filled with yellow mustard. Yellow mustard was invented by a Rochester, New York businessman named George French, along with his brother Francis. They called it French’s Cream Salad Mustard when they introduced it at the St. Louis World’s Fair in 1904.

LeRoy New York is in Genesee County, south of Rochester. In 1897 a carpenter in LeRoy named Pearle Wait created a fruit flavored gelatin concoction while trying to come up with a cough medicine. His wife named the gelatin mix Jell-O. Neither Pearle nor his wife had any experience marketing a product and Wait sold the idea to a local businessman, O.F. Woodward. Woodward was an experienced producer of patent medicines but he was unable to generate much interest in Jell-O. Fed up with poor sales, Woodward sold the Jell-O business to Sam Nico, allegedly for the sum of thirty-five dollars, in 1900.

Under Nico Jell-O began to sell. By 1904 Jell-O recipes and advertising was appearing regularly in lady’s magazines. As sales increased the company reorganized and became the Jell-O Company, later merging with the Postum Cereal Company as part of the creation of General Foods (Postum was a coffee substitute beverage made from ground wheat). By 1944 Jell-O was marketed through the use of advertising which took advantage of war time rationing, and what became known as Jell-O molds created an entirely new industry.

New York is also the birthplace of the Delmonico steak, widely imitated and called by many names. It came from the restaurant of the same name, which was the first restaurant in the United States to allow patrons to order from the menu a la carte. Delmonico’s gave the gastronomic world many dishes besides the eponymous steak, including Lobster Newberg, Delmonico Potatoes, and the Wedge Salad. It was the site of the first appearance of Manhattan Clam Chowder, beginning the unending debate of which style – New England or Manhattan – is the best clam chowder.

In the middle of July 1863, beginning ten days after the Union victory at the Battle of Gettysburg, lower Manhattan exploded in urban unrest which began as protests against the draft. The overwhelming majority of the rioters were Irish immigrants or of Irish descent. Within hours of the riot’s beginning it became a race riot, directed at the free blacks which had been flocking to the city in search of work. The Irish were outraged over the competition for jobs keeping pay scales low. Over one hundred people were killed in the riots, and Union troops were diverted to the area to help bring the city under control.

The protest of July 13 was initially a demonstration against the draft, which allowed anyone to pay a fee of $300 to acquire a substitute rather than be drafted (almost $10,000 in today’s money). The first drawing of draft numbers under the new law occurred on July 11, 1863 and the second on Monday, July 13. On that day the site where the draft was taking place was attacked by a mob of more than 500, who set the building on fire, and destroyed the vehicles of the arriving firefighters. A hotel which refused to allow members of the crowds any alcohol was likewise set on fire. Later that day the Black Orphan Asylum on Fifth Avenue was looted of its food.

Businesses which were owned by blacks and those which were known to cater to blacks were looted and burned. The mob grew as it roamed the area of the city near the mid-town docks. The rioters attacked and destroyed businesses including brothels, boarding houses, tenements, groceries, pharmacies, and any other business where blacks were served. If the business was owned by whites, they were beaten and stripped of their clothes by the mob. That night heavy rains helped to clear the streets and quench the many fires left behind.

The mob began to form again the following day, and attacks on interracial couples occurred in several locations around the city. The Governor of New York, Horatio Seymour, arrived from Albany and informed the crowd that the draft laws were unconstitutional and that he intended to appeal to the Supreme Court to have them overturned. He was supported by contingents of armed Marines and troops from both West Point and the forts defending New York Harbor. The presence of the troops prevented the situation from deteriorating further.

At least eleven blacks were lynched during the riots, and the final death toll is unknown. Many blacks fled the city never to return, settling instead in nearby Brooklyn, which was then a separate city, or in Jersey City. Fifty New York buildings were totally destroyed by arson, including the Black Orphan Asylum. About 4,000 Union troops were moved from the Army of the Potomac to the New York area to keep the area under control. The draft resumed in August. New York continued to support the Union, and the factories of the Empire State alone produced more war material during the war than did the entire Confederacy.

After failing to sign the Declaration of Independence in 1776 Robert Livingston remained active in New York politics and became the Chancellor of the state, making him the highest ranking member of the state’s judiciary. In that role he was the first American to administer the oath of office to the President of the United States. He later went to Europe during the Jefferson administration, as Minister to France. It was Livingston who negotiated the Louisiana Purchase. While there he met Robert Fulton, who had built a model steamboat and tested it on the Seine. Livingston already owned the rights to the use of steam power on the Hudson River, then known as the North River.

Livingston contracted with Robert Fulton to build a larger version of his working model and begin operating it on the Hudson. Fulton returned to New York with his plans for the larger vessel, which became known as the Clermont but was never christened with that name. It became the Clermont in the public’s mind because of its association with Livingston’s family estate on the river, Clermont Manor. Fulton’s vessel was built in New York City by the Charles Browne Shipyard and when the hull was complete it was fitted with the engine built to Fulton’s design by Boulton and Watt in England.

The completed vessel was first tested in the Hudson River on August 17, 1807. The vessel reached Albany in 32 hours, which included a stop of more than 20 hours at the Livingston estate. The actual travel time between New York and Albany was 12 hours. Less than a month later, on September 4, paid passenger service began between New York and Albany. The vessel, identified in the schedules and advertisements as just the Steamboat, departed New York on Saturdays and returned on Wednesdays. Several stops were made on both passages, including at West Point and Poughkeepsie.

During the winter of 1807-08 the vessel was entirely rebuilt, altering its dimensions by widening its beam (the width of the vessel at its widest point) in an attempt to gain stability and additional space for passengers and cargo. The ship was so successful that the Livingston/Fulton team were soon commissioning additional vessels and with more vessels the number of scheduled runs increased. They had three vessels in service by 1812, referring to the first vessel as the North Steamer in their advertising and on their schedules.

Livingston died in 1813 and Fulton in 1815. With Fulton’s death the partnership, which had continued with Livingston’s heirs, was dissolved and the first profitable transportation line powered by steam in North America became a target for others. In 1824 the monopoly on steam transport in New York waters which had been held by Livingston and his heirs was overturned by the Supreme Court. By 1840 there were over one hundred steamboats plowing up and down the Hudson River, and connecting New York by ferry to Brooklyn, Staten Island, and New Jersey.

“The Declaration of Independence: A History” entry of the National Archives and Records Administration (NARA) online