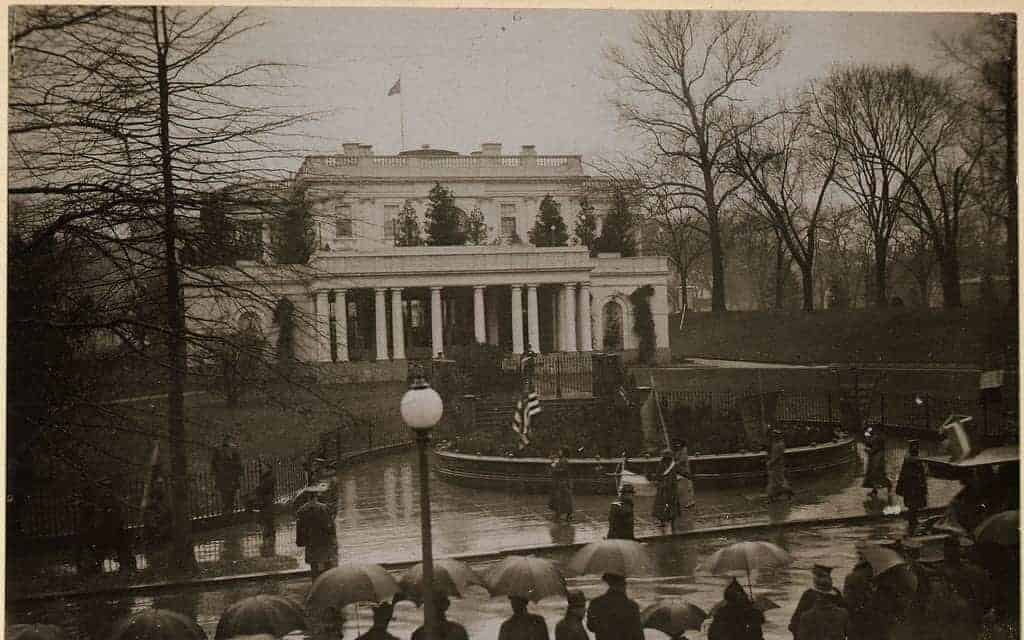 Following the Senate’s overwhelming defeat of the proposed suffrage amendment the leaders of the AWSA and the NWSA met to resolve their differences and unite their two organizations as part of an overall strategy to focus their efforts on individual states. The NAWSA was formed in 1890 when the two organizations merged after several years of discussion to resolve the differences between them. The reconciliation was initiated by Lucy Stone and was accommodated by Susan B. Anthony. At its founding convention Elizabeth Cady Stanton was elected as its president and Anthony became a vice president at large.

Although Stanton was the president in name, it was Anthony who largely led the organization, with Stanton mostly absent, staying with her daughter in England. Stanton quickly proved to be too radical in her approach for most of the younger members of the organization. In 1895 Stanton published The Woman’s Bible in which she roundly condemned the Bible as a source of many of the restrictions imposed on women. The NAWSA announced that it had no connection with Stanton’s book and did not endorse it and Stanton found her influence over the organization and the women’s movement in sharp decline. Increasingly embittered and detached she died in 1902.

After the defeat of the suffrage amendment it was evident that there was little support for women’s suffrage in the South, which bode ill for any future attempts to obtain suffrage in the southern states. The NAWSA derived a strategy through which they could persuade politicians in the south desirous of maintaining white supremacy by giving the vote to educated women who would have to pass literacy tests, who would at the time be mostly white. Several suffrage societies were established in the South, and the NAWSA held its annual conventions in the southern cities of Atlanta and later New Orleans (where their old ally Frederick Douglas was denied credentials to attend), but the strategy did not succeed.

The NAWSA began to appeal to the middle class and upper class women, distancing themselves from the radicalism of Anthony and creating a new image of her as a wise and gentle grandmother. By 1907 societies were formed which appealed to upper class and middle class women throughout the United States, most of them affiliated with the NAWSA. In 1909 the World Suffrage Party was formed modeled on the lines of Tammany Hall, with its members for the most part remaining loyal to the NAWSA. Where before the public view of women working with the suffrage movement was mostly negative, the reforms of the progressive era created a more accepting atmosphere.

The NAWSA continued to accept few black women, although they did allow some, but not in the South. It continued to focus on obtaining the franchise in individual states until enough allowed women could vote and an amendment could be forced through Congress. In 1913 the Southern States Woman Suffrage Committee was formed by Kate Gordon to stop the process from going beyond the state level. Gordon believed that enforcement of an amendment allowing women to vote would lead to enforcement of the Fourteenth and Fifteenth amendments regarding Black voters, which most southern states were avoiding through poll taxes and other means.

In 1918, with the United States at war in Europe, the House of Representatives passed the proposed suffrage amendment in January. The more conservative Senate did not debate the amendment until September, citing the importance of war issues taking precedent. President Wilson spoke before the Senate, an uncommon act for a President, and asked the Senate to pass the amendment, saying that it was a necessary measure in support of the war. The Senate failed to pass the amendment by two votes. The NAWSA immediately targeted four of the Senators who had voted against the amendment that were standing for re-election that fall.

After succeeding in defeating two of the four targeted Senators, the NAWSA urged the creation of a league of women’s voters in Missouri, a state which granted women the right to vote in national elections in March 1919. President Wilson called Congress into special session, and in June 1919 the 19th Amendment was passed by Congress and sent to the legislatures of the states for ratification. Three quarters of the states were required to vote for ratification before the amendment could be accepted and enforced as the law of the land. The NAWSA had put in place a process to push through ratification before Congress had passed the amendment.

Although the ratification process went fairly smoothly in the Northern and Western states there was little or no support for ratification in the South, which had been expected. Both the Democratic and Republican Parties endorsed the amendment, removing much of its political toxicity for some, but in the South there was still resistance based on the fear that enforcement would bring with it enforcement of Black voting rights. Gradually southern resistance was overcome by the strategy of the NAWSA and the belief that white women voters would support state laws which limited access by Black voters to the polls.

In late June Texas voted for ratification, followed by Missouri and Arkansas in July. Other states of the Old South rejected the amendment for decades after it became law, Mississippi did not change its vote and ratify the amendment until 1984, North Carolina in 1971, Louisiana in 1970. When Tennessee voted in favor of ratification on August 18, 1920 the required number of 36 states was achieved. After the amendment was ratified and officially the law of the United States it faced yet another challenge, this one beginning in the courts of Maryland, which had not voted for ratification.

Oscar Leser sued to stop women from voting in Maryland, citing the Maryland Constitution as limiting the franchise to men, and because two of the states which had ratified the amendment did so in violation of their rules and procedures. The Supreme Court held that the process of ratification was established by federal law and was thus not subject to state law. The court decision was reached in 1922, allowing women to register and vote in Maryland.

Women and the vote

In the general elections of 1920 nearly all states had the mechanisms in place to support voting by women, but the turnout among eligible women voters was low, and remained so for many years. In the first election following certification of the Nineteenth Amendment, in the fall of 1920, only about 36% of eligible women voters chose to exercise the franchise, compared to about 68% of eligible men. The reasons for the lack of participation are unclear and speculation ranges from simple lack of interest to the social stigma still attached by some to women entering into what was considered to be the business of men.

Several prominent politicians had expected the emergence of large voting blocs composed of women and altered their political agenda to accommodate them. This too did not occur for a considerable period, even during the war years of World War II, when more women were in the work force than ever before in American history. Not until the post-war baby boom years did substantial women’s voting blocs become a feature of the American electorate. Numerous efforts to shift the suffragist movement to one of uniting women to vote as a bloc were thwarted to a large degree by the two party system.

The NAWSA held its final convention in February 1920, where confident in the outcome of the Nineteenth Amendment they dissolved themselves and created in their stead the League of Women’s voters. The League was created expressly to help women exercise their right to vote by merging the NAWSA and the National Council of Women Voters. In its initial charter men were prohibited from joining the League. The ban was lifted in 1973. The League was established as a non-partisan organization, officially not endorsing either candidates or parties, though it does support various issues and policies.

In 1918 in England, Parliament granted the right to vote to women over the age of 30, or to wives of householders or householders themselves. In 1928 the minimum age requirement was lowered to 21, and the property requirements lifted. France did not allow women to vote until the waning days of World War 2, and the first opportunity for women to do so were the municipal and parliamentary elections of 1945. Despite it taking decades for the United States to enfranchise women, it was largely part of a global shift in the notions of the role of women in society, the home, commerce, and of course politics.

In 1965, in part in response to the laws in the South which prevented many Black women from voting, President Johnson pushed through Congress the Voting Rights Act. Literacy tests as a prerequisite to voter registration were outlawed by the act, as were other devices designed to limit the access of voters to the polls, and despite numerous efforts to evade the purpose of the act by some states it has been called the most effective single piece of civil rights legislation in the history of the United States. Access to polls based on sexual discrimination are history in the United States, despite the misguided efforts of some to re-establish policies restricting the right to vote.

“Susan B. Anthony: A Biography of a Singular Feminist”, by Kathleen Barry, 1988

“Century of Struggle”, by Eleanor Flexner, 1959

“Women’s Suffrage”, entry and documents from the Library of Congress, selected collections, online

“Senators to Vote on Suffrage Today: Fate of Susan B. Anthony Amendment Hangs in Balance on Eve of Final Test”, by The New York Times, September 26, 1918

“The Trial of Susan B. Anthony: Legal Questions before the Federal Courts”, by Ann D. Gordon, Federal Judicial Center, online

“New Women of the New South: The Leaders of the Woman Suffrage Movement in the Southern States”, by Marjorie Spruill Wheeler, 1993

“What’s changed for African-Americans since 1963, by the numbers”, by Juliet Eilperin, The Washington Post, August 22, 2013