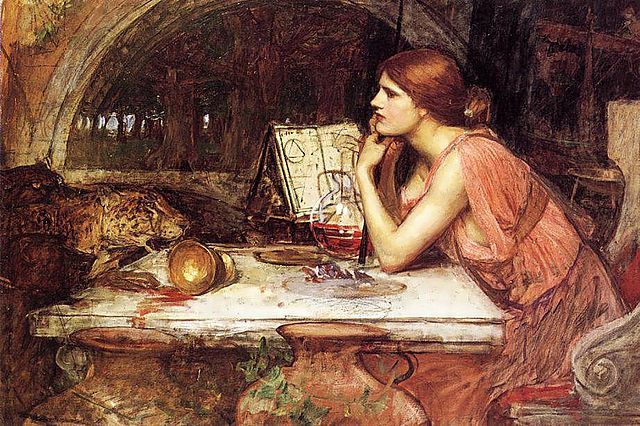 Christianity may have been the dominant religion of the empire. However, it was not until the Edict of Thessalonica in 380AD that it became the only authorized religion in the Roman Empire. Until then pre-Christian faiths were still legal- and so a threat to Christianity- especially as many Christians regarded classical learning as pathways back to the pagan past. Study of ancient philosophy and culture had already led one Christian raised Emperor, Julian, back to the old ways. This learning, preserved in the minds of pagan teachers and their books was regarded as a threat.

So, pre Christian learning was demonized and many innocent philosophies and ideas became associated with magic. As this became apparent people began to burn “their entire libraries” to try to avoid impeachment. If they did not, after they were found guilty, the books would burn anyway. Ammianus Marcellinus described how “innumerable writings” belonging to the ‘guilty’. …were hauled out of various houses” and “burned in heaps as being unlawful…although the greater number were treatises on the liberal arts and on jurisprudence.”

As for those who studied and taught classical culture, they became a significant target for accusations of magic. Many were found guilty and executed. However, some were not. One of those who had not one but several lucky escapes was Libanius, a Greek teacher of rhetoric and noted intellectual and lifelong ‘pagan.’ Libanius had taught pagans and Christians alike, including Basil of Caesarea and John Chrysostom. Despite his paganism, he had also been well respected by the Emperor Constantius II. However, he had also been close friends with Emperor Julian. His friendship with the apostate emperor and his intellectual standing made him a target.

Libanius tells in his Autobiography how he almost fell victim to the hysteria of the trials. A jealous rival Bemarchius who Libanius had bested in public oratory accused him of using magic. He claimed Libanius knew an astrologer who “controlled the stars and through them could bring help or harm to men.” To support his accusations, Bermarchius rallied support from various “schoolmasters and professors” who were also jealous. Libanius was imprisoned. However, he managed to avoid the death when the governor “let it be known that…he intended to support the law and myself. Libanius was released and quickly accepted a post in Nicomedeia to avoid further repercussions.

However, not all those who were accused of magic in late antiquity were ‘pagans.’

Early Christianity was by no means one unified religion. By the time of its acceptance by Constantine I in the early fourth century, several opposing doctrines were at large which created strife and tensions between the various factions. Trinitarianism or the belief that God was three consubstantial entities: the father, son and Holy Ghost, was one. Arianism, which maintained that Christ was a separate entity was another. These opposing doctrines led to bitter conflicts and even accusations of witchcraft.

Athanasius was Bishop of Alexandria for 45 years between 328 and 373AD- on and off. The Bishop was a confirmed Trinitarian and a firm adversary against what he viewed as the Arian heresy. Unfortunately for Athenasius, in 355AD, the emperor of the time Constantius II, did not share his views. Constantius was an ardent Arian and determined to promote his doctrine. This determination meant that all opposition had to be removed. In 355AD, Constantius decided he wanted the contentious Athenasius removed from his post in Alexandria. So, in direct opposition to the pope, he called a synod and accused Athenasius of witchcraft.

The Synod sat in Milan, composed of 300 bishops, mostly of Arian persuasion. Athenasius himself was absent. The charge put before the bishops was that Athenasius was guilty of divination. The Bishop of Alexandria was accused of using prophetic lots, reading omens through the flight of birds and generally “practices repugnant to the purposes of the religion over which he presided.” Without giving him any chance to defend himself, the committee found Athenasius guilty and removed him from his office.

Six days later, Athenasius was expelled from Alexandria. He withdrew into the desert where he remained for the next six years until he was once again reinstated. No one sincerely believed Athenasius was a magician, and it was widely recognized that his trial had been based upon doctrine rather divination. However, the Bishop of Alexandria retained a reputation as a seer for the rest of his life.

The Annals of Imperial Rome, Tacitus 2017

Who’s Who in the Roman World, John Hazel, Routledge, 2001