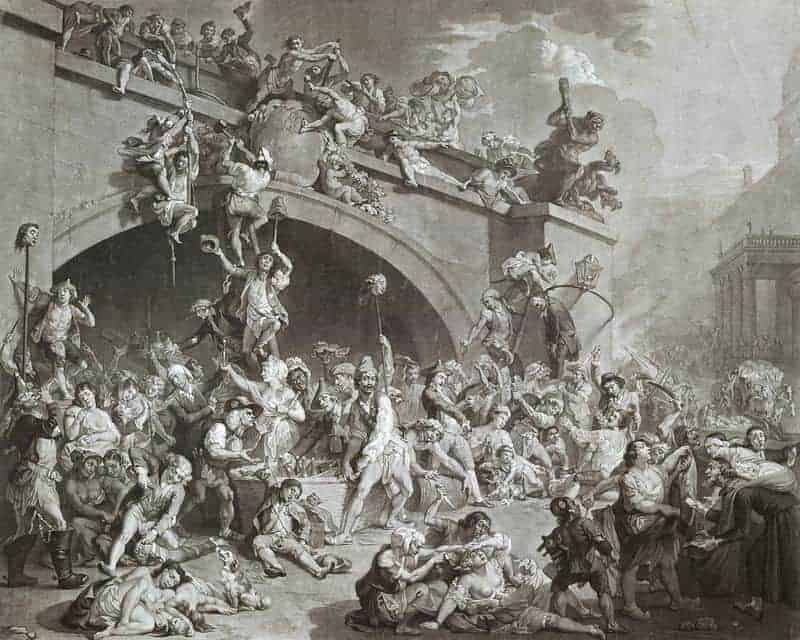 The Storming of the Tuileries

In the summer of 1792 the Legislative Assembly, formed to work towards reforms with the assistance and co-operation of the Monarchy, enacted several decrees which would further weaken the King’s authority. Louis had established cabinets which were largely manned by constitutional monarchists, a conflict with the desires of the majority of the Assembly, and by August the situation was at a crisis. Louis ignored the urging of Lafayette to flee to safety in the Vendee, and when Lafayette himself fled he was arrested. On the night of August 9 mobs began to gather in the streets of Paris, and the National Guard was dispatched to the Tuileries, the King’s palace in Paris.

The Assembly had ordered the disbandment of the King’s Guard as being too aristocratic, but he was still protected by a force of about 900 Swiss Guards mercenaries. The National Guard was ordered to take the palace. They were supported by the sans-culottes of Paris. Louis, reviewing the situation and retaining his lifelong abhorrence of violence, decided to leave the palace and take shelter within the Assembly, which had him wait in another room as they debated the fate of the monarchy, in deference to a law which prohibited debate before the King. As the Assembly argued and Louis and his family waited, the troops of the National Guard stormed the Tuileries.

Despite having no members of the Royal Family present requiring defense, the Swiss Guards stood their ground. The National Guard and the supporting sans-culottes at first stood in a sort of face-off before the Swiss began firing in defense of the palace grounds and buildings. When Louis heard the sounds of firing he sent a note ordering the Swiss to stand down. Upon receipt of the note the Swiss attempted to disengage and withdraw through the palace. In doing so they lost most of their unit cohesiveness and the sans-culottes swarmed over the shrinking groups, slaughtering then whether they resisted or not.

A group of about five dozen Swiss Guards surrendered to the sans-culottes and were disarmed, escorted to the nearby Town Hall, and executed, most with axes or pikes. Their severed heads were then displayed on pikes through the streets. Of the more than nine hundred man force which attempted to surrender in deference to the orders of the King, about three hundred survived the ministrations of the sans-culottes. Of those, roughly two hundred died from their wounds or during the September Massacres the following month as they lay in the Paris prisons. There is little doubt that had it not been for the order to surrender and the obedience of the Swiss they would have held the palace and the slaughter could have been avoided.

In the immediate aftermath Louis retained his title of King of France and the Assembly continued to debate his future personally as it called for the National Convention. When the National Convention formed it abolished the monarchy, although Louis continued to be treated respectfully until the increasing danger from Civil War in the Vendee and foreign invasion forced the consideration of his being an agent of the enemies of the Republic. As a practical matter, the fate of Louis XVI was sealed when he sent a note to his Swiss Guards on August 10, 1792. After that date the sans-culottes, formed from the lowest class of French society, carried greater influence over the future of France than did its King.

“The French Revolution: Its Causes, Its History, and it’s Legacy after 200 Years”, by George Rude, Grove Press, 2005

“The Trial and Execution of Louis XVI”, historyguide.org

“1789, The Fact and Fiction of the Sans-Culotte Movement”, mtholyoke.edu

“Louis XVI’s Weakness leads to the Massacre of his Swiss Guards”, nobility.org, January 30, 2014