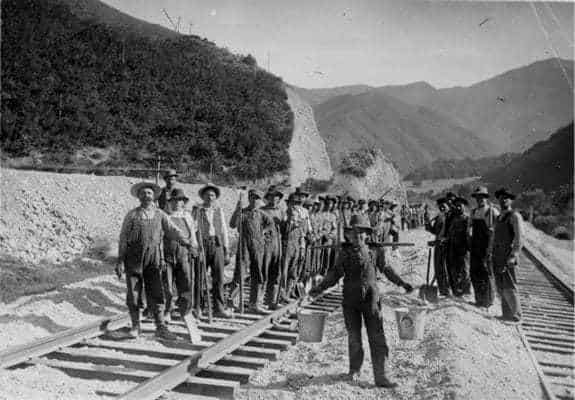 Even today it is hard to appreciate the amount of influence rail transportation has on everyday life. It remains a major way to move around both goods and people to this very day. America’s railroads played a major role in shaping the country all throughout the 19th and 20th centuries.

Because it had many advantages over other transportation types at the time, railroads expanded very quickly in the United States during the 19th century. In 1853, Congress authorized funds to survey the lands for an intercontinental railroad. It wasn’t until 1862, after the Civil War started, however, that Congress passed the Pacific Railroad Act, which guaranteed grants and lands for the railroad. It chose the Central and Pacific Railroad Companies for this project, and in 1866 they began working.

Over 2,000 miles of track was put down, and at least $36 million was spent, though we don’t know the exact amount put towards this project. Some estimates have it at closer to $60 million.

The laying of this line was anything but easy. And while it would only take three years to lay that 2,000 miles, many died in the process. From the Pacific Railroad, many were caught in avalanches in the Sierra-Nevada Mountains. Many others were lost to disasters involving dynamite and other high explosives. How many died is unknown, as reports at the time were inconsistent. Historians believe that around 300-450 people died in the construction, but those numbers in other sources range anywhere from 110 to around 1,500.

The conditions for these workers, as you might imagine, were very tough. 12-hour workdays were the norm, especially for the Chinese immigrants that were working for the Pacific Railroad. Harsh winters, disease, and Indian raids caused a lot of problems for the workers and the companies that were in charge of the project.

On May 10, 1869, the two teams that were working towards each other from opposite coasts met in Promontory, Utah, and the first intercontinental railway was finished.

The impact of having a railway that connected the east to the west was huge. It took some of the ‘wild’ out of the Wild West, and allowed vast expansion into the western United States. It also saved a lot of time. No longer would people have to create wagon trains and suffer months of terrible conditions to travel cross-country.

With the influx of immigrants in the years after the Civil War, the additional option to settle to the west was welcome.

By the time the 20th century rolled around, railroad companies were the most powerful entities in corporate America. They literally controlled the transportation lines that the entire country relied on. Names that everyone might recognize were involved in the control of the Railroads: Vanderbilt, Gould, Crocker, and Stanford were some of the names that gained prominence because of the railroads.

Still today, rail transport is held by only a few companies. And while these companies are now public companies, they still have their roots in those same companies that built the railways this country thrived on for over a century, including the intercontinental railroad.