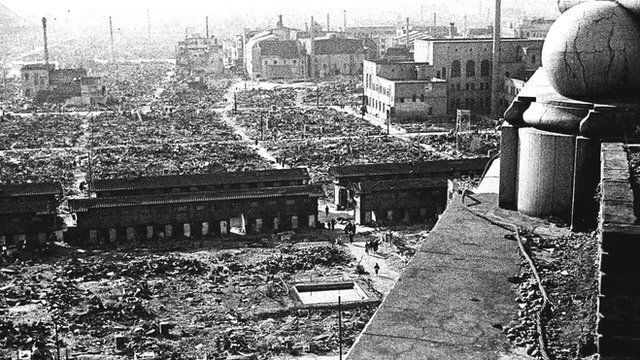 On this day in 1945, the United States Army Air Force firebombed Tokyo, Japan. It was the deadliest bombing raid in history to that point. The death toll was just shy of the causality count caused by the atomic bomb attacks launched five months later, on August 6 and 9, at Hiroshima and Nagasaki, which killed a combined 129,000 civilians.

“Operation Meetinghouse” began on the night of March 9-10, 1945. From the dark sky, three hundred B-29s dropped 1,665 tons of explosives, mostly napalm-infused cluster bombs on the sleeping residents of Tokyo.The basic design of the weapons was simple.They were made of plain steel pipe and included a hexagonal cross section. Upon hitting a hard surface, a timer would be triggered. Within 3 to 5 seconds, an intense surge of fiery napalm globs (an intrinsically inflammable substance which is jellied gasoline) spewed in every direction instantly setting everything within a 100-foot range on fire.

Accompanying the M-69s were M-47s. They were also incendiary devices, but much heavier and packed with both napalm and phosphorus, which made them ignite upon impact. It took two hours for the Americans to run through their explosives. The first bombings were in a densely populated working class neighborhoods near the Koto and Chou city wards.

The bombs were dropped in the shape of an X to cause as much fire to spread, and as much death and destruction as possible. Nearly 16 square miles of Tokyo was in ruin, and over 100,000 of its residents were dead, many of their bodies melted in the massive inferno. One million were wounded, and one million homes were lost.