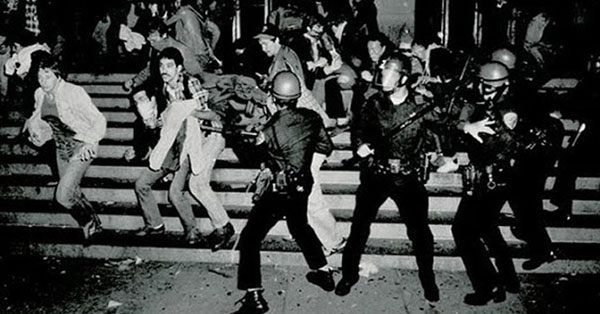 The Stonewall Riots, that took place on June 28, 1969, are often credited with being the true beginning of the LGBT rights movement in the United States.

The 1960s are often considered one of the most liberal time periods in United States history, and for good reason. The Civil Rights movement, anti-Vietnam protests, and the counterculture, as it’s called, all flourished in the 1960s. That decade is often called the “Era of Free Speech.”

Those influences that were so prevalent in the 1960s were part of the catalyst for the Stonewall riots. Add into that the societal view on gays and lesbians at the time, and the conditions were ripe for conflict.

Police raids in New York City were very common in the 1960s. Entrapment was also rampant in the city during those days. Basically, a cop would enter a gay establishment (or a men’s locker room), then arrest a man or woman for solicitation if that person bought them a drink. The legal system was also very corrupt and discriminatory against the LGBT community, as most lawyers would throw these entrapment cases, and cut the cops in on the fees.

It was all put into place by several city administrators who were attempting to rid the city of its ‘gay influence,” specifically gay bars. It was on one of the police raids, that the riots at the Stonewall Inn began.

The Stonewall Inn, which is located in Greenwich Village, part of Manhattan, was a well-known location for members of the gay community. On June 28, 1969 when police raided the Inn, they quickly lost control of the situation. Their raid quickly attracted a crowd, and the riot began.

At around 1:20 AM, the morning of the 29, several NYPD officers and detectives arrived at the Stonewall Inn, but it quickly turned sour for the police. This was driven by some behavior by some of the police officers when they began to assault several of the women at the bar.

After about 20 minutes, between 100 and 150 people had gathered outside the bar. The crowd turned violent after the cops started to push several of the bystanders, and after rumors that there were still patrons inside the Stonewall that were being beaten by the police. As most riots do, this one started with shoves and quickly escalated.

One of the witnesses to the riot commented “There was a certain beauty in the aftermath of the riot… It was obvious, at least to me, that a lot of people really were gay and, you know, this was our street.”

The riot at the Stonewall Inn is often seen as the first time the gay community stood up and fought back against the systemic discrimination that had been the norm through the United States up until that point.

After the riot, several new organizations were founded, including the Gay Liberation Front, which was the first organization to use the word ‘gay’ in their name.

It would be but the beginning of a movement that is still a part of American culture today. Even as the Civil Rights movement was ultimately successful, the LGBT movement continued on, and is still fighting for equality to this day. On the last Saturday in June of each year, the LGBT community gathers in Pride marches around the world, as an annual reminder of the fight that started it all at the Stonewall Inn in 1969.