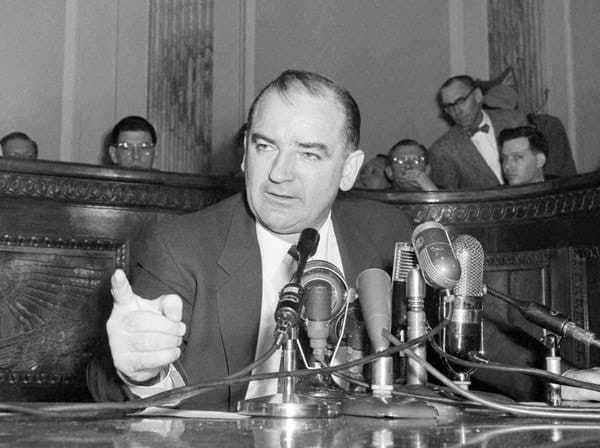 During the period after World War II and up through the early 1960s, the United States went through an era called the “Red Scare.” Communism was a very real threat to many Americans, as the political machine in Washington began their Cold War with the USSR.

Tens of thousands of Americans were suspected of being communists, or subversives as they were labeled, and many of them were put under investigation by the FBI and Department of Justice.

Perhaps the biggest reason behind all of this was a man named Joseph McCarthy. McCarthy was a republican senator from Wisconsin who was an unimpressive and backseat-type politician who was unknown outside of Wisconsin until 1950. In February of that year, in an attempt to bolster his chances of reelection, he claimed there were more than 200 “known communists” at the Department of State.

This created mass hysteria, and McCarthy used that to ruin many careers with his reckless claims and charges. Using the media as a weapon, he silenced opponents who might have been more rational about the situation, and drew in the American public with reckless rhetoric and exuberant expressions.

Of course, there is absolutely no evidence that he ever found a real communist, despite trying for almost half a decade. Because all of McCarthy’s claims were smoke and mirrors meant to put him in the spotlight, it isn’t a surprise that the end of McCarthyism was quick and brutal.

By 1954, McCarthy’s fame and momentum had started to ebb. In order to reestablish his time in the spotlight, he claimed the U.S. Army was “soft on communists”. The hearings he held were widely viewed on television, and for the first time the American people saw McCarthy for what he was: a bully. The hearings were the final nail in the coffin for his political career.

Though he would continue to serve in the Senate, he would no longer hold any power there. He took to drinking heavily and on May 2, 1957, he died due to complications with his liver caused by his alcoholism at the age of 48.