Today in History: The Magna Carta is Sealed (1215) 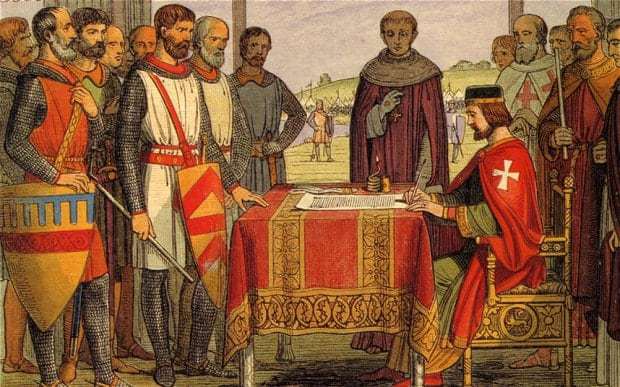 Today in History: The Magna Carta is Sealed (1215)

The Magna Carta is often considered one of the most important political documents in all of history. The Magna Carta began its life as a peace treaty between King John of England and his barons who had been at war for some time. The original document was drafted by the Archbishop of Canterbury in 1215 and was signed and sealed by King John on June 15, 1215.

Since that time the Magna Carta has gone through numerous iterations and its importance in terms of the governance of the United Kingdom has faded. However, elements of the Magna Carta remain.

The original agreement was between King John and a group of ‘rebel’ barons who severely disliked the King. It was meant to provide the barons with protection against illegal imprisonment, access to swift justice, and a limitation on the Crown’s ability to collect feudal payments. It was also a document that protected church rights.

At that time, it was not a successful document. In fact, the agreement that the Magna Carta represented was upheld by either the Barons nor King John. This resulted in the First Barons War, which was fought between 1215-1217. History has shown us that the monarchy of the British Empire was often in a state of conflict with itself, its nobility, and foreign powers (most often France).

The Magna Carta was reissued in 1216 by the regency government of Henry III who became King after King John’s death. That government hoped that it would end the First Barons’ War, especially with the more radical elements of the first document removed. It didn’t work, as the war continued on for another year.

Over time, the document lost a lot of its political relevance. As the parliament of the UK was given more governing power, and as laws evolved, the Magna Carta wasn’t the beacon of peace between the King and the nobility that it once was.

So, why is the Manga Carta deemed so important if it was meant as a treaty between the monarch and the nobility? The answer is that it represents a codified document of rights that belong to the English people. The Magna Carta is said to be the inspiration for the United States Constitution as well as many other constitutions around the world.

A lot of the apocryphal and idealistic history surrounding the Magna Carta began in the 16th century when lawyers and politicians repurposed the ideals behind the document to mean more than was originally intended. They believed that the Magna Carta was an attempt to restore an ancient British constitution that guaranteed rights to the common man, and was an attempt to give power to the parliament in order to discourage power-hungry monarchs.

It is these somewhat false ideals that influenced the newly formed United States when the Founders were drafting the original US Constitution. The idea that there should be a single codified document that laid out the rights and responsibilities of the government, along with the guaranteed rights of its people became the backbone of modern democracy.

Despite the re-imagining of what the Magna Carta actually was (an agreement between the King and his Barons as opposed to what it became, an agreement between the government and the common people), it remains one of the most powerful documents in history. It has often been called the greatest constitutional document ever created, and with its influence over the constitutions of so many countries worldwide, that is hard to argue against.