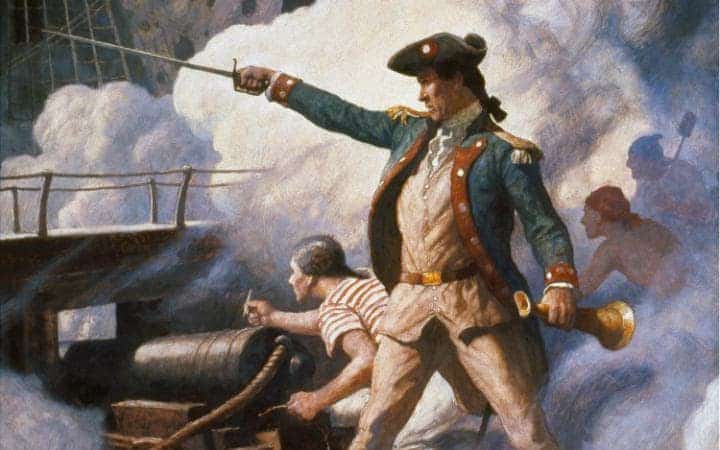 John Paul Jones was a sailor by trade, and sailing had been a part of his life since he was very young. Originally from Scotland, Jones was a member of several different merchant and slave vessels during the 1760s and early 1770s. After running afoul of the British law after killing a man (supposedly in self defense, though no one knows for sure), John Paul added the name Jones to his own moniker, and officially moved to the colonies.

On April 10, 1778, Jones set out from France to raid British ships during the Revolutionary War. It was during these missions along the coast of Ireland that Jones made a name for himself, as one of the most successful and cunning naval leaders of the war.

For those who just casually study the American Revolution, most of the focus is on the fighting that happened within the confines of the American colonies. However, Jones is famous for leading attacks on British ships and ports in British waters.

One of the most famous battles of the Revolutionary war was fought between the Jones-led Bonhomme Richard and the British 50-gun monster named the HMS Serapis. The British held the advantage in that they had more guns and a larger ship, and the battle did not go well for Jones and his crew. However, when the captain of the British ship ordered him to surrender, Jones famously responded “I have not yet begun to fight!”

Even though his ship was taking water on in places it shouldn’t, Jones and crew fought on and eventually wore the Serapis down, leading to its ultimate surrender.

After the war, there wasn’t as much demand for Jones’ services, and after being shuffled around a bit, he actually served and fought for Russia for several years before retiring in Paris, where he died in 1792.

John Paul Jones is often referred to as the Father of the United States Navy, and as his early leadership of the new navy showed, that title is well-earned. His colorful personality, and his belief that there is no such thing as a no-win situation, has made him a very popular historical figure. He was buried at the Naval Academy at Annapolis Maryland, and has a statue in the United States Capitol.