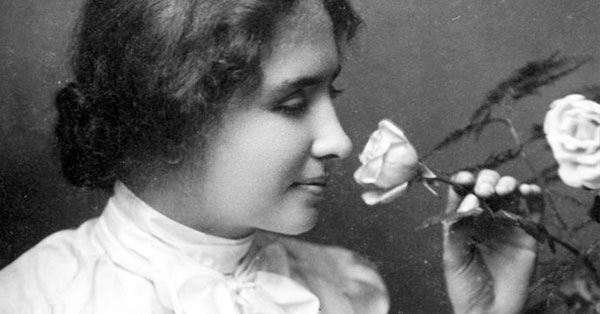 Helen Keller is perhaps one of the most inspiring Americans ever born. Because of that, Keller’s life is also very well documented.

Helen Keller was born June 27, 1880 in Tuscumbia, Alabama, and she was born with both the ability to see and hear. It wasn’t until she was 19 months old that an illness left her deaf and blind. Because of how young she was, her ability to communicate was highly impaired by her newly developed handicap.

BY the time she had reached six years old, Keller had successfully developed her own version of sign language, which allowed her a way to communicate with her family. She was also able to identify people by the steps they took in a room. Both of which are very impressive given both her age, and her lack (at the time) of any official instruction.

In 1886, her parents (inspired by Charles Dickens’ American Notes, which depicts the education of another deaf and blind woman) sought out help for their daughter. Through a series of referrals (one of them being Alexander Graham Bell), the Kellers were able to make contact with the director of the Perkins Institute for the Blind, Michael Anagnos. Anagnos assigned Anne Sullivan to be Helen Keller’s instructor. What started there was a lifelong relationship.

With Sullivan’s help, Keller flourished. So much so, in fact, that she became the first deaf and blind person to ever be awarded a bachelor’s degree. During the beginning of her education, she met Mark Twain, who then introduced her to the owner of Standard Oil, Henry Huttleston Rogers, who paid for the rest of Keller’s education after being so impressed with her abilities.

After her education, Keller became an author and lecturer. Because of that, she has become one of the most quoted people in history. “Character cannot be developed in ease and quiet. Only through experience of trial and suffering can the soul be strengthened, ambition inspired, and success achieved,” is one of her more famous quotes, of which there are many.

Throughout her life, Keller had several companions (basically teachers, minders and assistants). Anne Sullivan was her companion for 49 years, until she died in 1936. Keller also had a love affair with a man named Peter Fagan when she was in her thirties.

Beyond lecturing and writing, Keller is also often known for her political stances. She was a well-known socialist, and member of the American Socialist party. She also became a high-profile advocate for people with disabilities, and several other causes, both political and philanthropic. Keller was well-travelled, and also well acquainted with some of the most famous people of the 19th and 20th centuries. From her travels and experiences, she came to know Mark Twain, and Alexander Graham Bell. She also met every single United States President from Grover Cleveland in the 1890s to Lyndon B. Johnson in the 1960s just before her death.

Helen Keller died on June 1, 1968 after a series of strokes. She, in her later years, was awarded the Presidential Medal of Freedom, the highest civilian award the US president can give, and she was elected in the Women’s Hall of fame in 1965.