Today in History: More Evidence Found Against the Queen of Poisoners in France (1949) 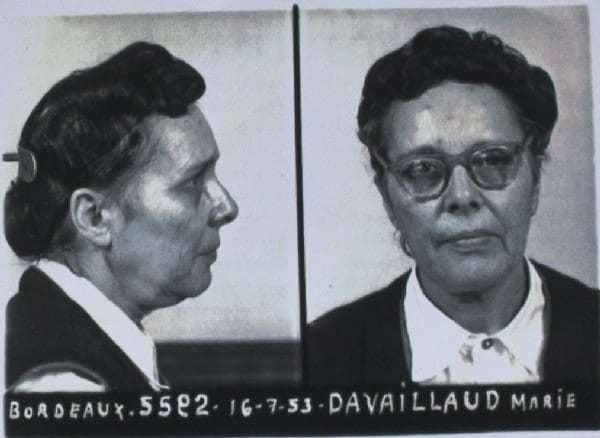 Today in History: More Evidence Found Against the Queen of Poisoners in France (1949)

On this day in 1949, French authorities exhumed the body of Leon Besnard, the son of a very wealthy family from Loudun, France. Leon Besnard was the last of 13 members of his family to die under suspicious circumstances.

For years, the Besnard family had suffered from what locals called the “Besnard Family Jinx”. With members of the family dying left and right, authorities became suspicious of Leon Besnard’s wife Marie, as she was soon the only family member left standing.

In 1928, Marie JosÃ©phine Philippine Davaillaud married Leon Besnard, and settled into a moderate lifestyle that both soon came to resent. His parents had inherited a fortune not long after Marie and Leon married.

In order to benefit from that inheritance, Marie and Leon Besnard invited his parents to live with them. Within three months, his father died, supposedly from eating a bad mushroom. A few months later his mother died, supposedly of pneumonia. The money that his parent had inherited went to Leon and his sister Lucie.

Unsurprisingly, a few months after she got the money, Lucie also died, apparently committing suicide. Around the same time, Marie Besnard’s father died, officially of a cerebral hemorrhage, but would later be found to have been poisoned.

The money from Lucie Besnard went to her brother and his wife, now making them exceptionally wealthy, no doubt the motive for all of the suspicious deaths that surrounded them.

In the late 1930s, the couple decided they would try again. They sublet a few rooms to family friends, Toussaint and Blanche Rivets, a wealthy couple, both of who had named Marie as their sole heir. Toussaint died in July 1949, supposedly of pneumonia, and Blanche died of aortitis in December 1941.

Marie’s cousins, who had also listed Marie Besnard as their heir, died in 1945. In July 1945, Pauline Bodineau died after she (supposedly) mistake a bowl of lye for a bowl of dessert. Her sister, Virginie Lalleron, died the exact same way just a week later.

Marie’s mother, who had somehow managed to escape her daughter’s clutches for almost five years, died in January 1946.

In 1947, Leon Besnard, Marie’s husband was caught cheating on her. He died in October of that year from Uremia. Though, before he died he commented to a friend, saying “that his wife had served him some soup on a bowl that already contained a liquid.”

It was only after Leon’s death that Marie was finally placed under investigation. By the end of it, thirteen of the deaths that had surrounded Marie and Leon Besnard would be found to be poisoning. Every single one was found to have ingested arsenic in large quantities.

On May 11, 1949, Leon Besnard’s body was the first to be exhumed. Marie Besnard was arrested and charged with 13 counts of murder.

Despite evidence up to her ears, Marie Besnard got away with all thirteen murders. Between exceptional lawyers, and disappearing evidence, two of Marie Besnard’s trials went to mistrial, and the third acquitted her completely. That third trial took place in 1961.