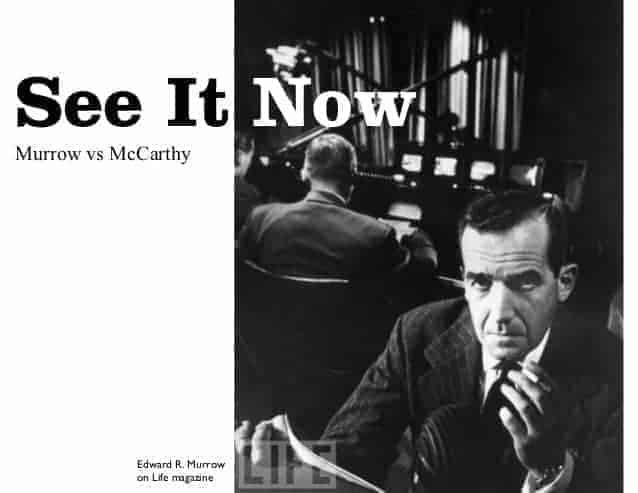 On this day in 1954, CBS utilized the airwaves to broadcast an episode of See It Now that would become one of its most popular in the history of that series. The show stepped directly into the line of fire, showcasing a critical look at the Red Scare and Senator Joseph McCarthy.

Senator McCarthy made judgments about individuals in the U.S. government and elsewhere based on hunches or fears instead of using fair investigative practices, accusing many of being communists or communist sympathizers. “McCarthyism” began gaining popularity in the United States just after World War II.

Communism and communist ideologies were not exclusive to the Soviet Union. Throughout the “Red Scare,” anyone accused of having communist opinions, ideas, thoughts or tendencies of any kind was considered a potential a spy for the Soviet Union…or had the potential to be one.

As the investigations escalated in the United States, even Hollywood could not escape the bandwagon. The infamous Hollywood blacklists offered unregulated, unsubstantiated accusations that put a number of people permanently out of work and ruined their careers.

The CBS show See It Now fell somewhere between a news show and documentary and was hosted by Edward R. Murrow. It was an ideal platform for pushing back at the direction the government was allowing the nation to head in concerning Communist witch hunts. On March 9, 1954, the show featured McCarthy’s interrogation of witnesses in concert with his anti-communist speeches. The episode ultimately demonstrated to audiences why communists were not the number one threat to American society, but Joseph McCarthy and his tactics were.