Today in History: Brown vs. Board of Education Decided by the Supreme Court (1954) 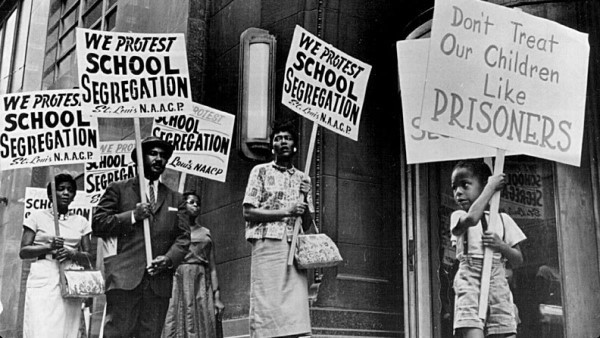 Today in History: Brown vs. Board of Education Decided by the Supreme Court (1954)

Brown v. Board of Education of Topeka is one of the most famous Supreme Court cases ever to be decided. To this day, it remains one of those landmark decisions that continue to shape the United States’ law system.

Since the end of the Civil War, the battle for Civil Rights has been hard-fought in America. In 1896, segregation was first challenged in the Supreme Court in the case of Plessy v. Ferguson. In that case, the court ruled that separating railroad car accommodations by skin color was Constitutional and within the bounds of the 14th Amendment’s equal protection clause.

This was the justification for segregation for the next 60 years in the U.S. After the ruling, it was seen as normal for almost every public place (including Federal Government buildings) to segregate facilities based on skin color.

No place was this more apparent than in education, where “Colored Schools” were created within the Public School system. Most often, these were smaller and less funded than their white counterparts. For decades, Civil Rights leaders struggled against the segregationist policies throughout the entire country, but especially in the South. Events like George Wallace standing in a doorway at the University of Alabama to keep Black students out (which didn’t happen until 1963) are stereotypical of how polarized race relations were even eighty years after the Civil War ended.

Brown v. Board of Education of Topeka concentrated on Linda Brown, who had been denied admission to an elementary school in Topeka, Kansas based on the color of her skin. Thurgood Marshall was the lead lawyer for Brown’s legal team. He would later become a Supreme Court Justice, the nation’s first African-American to hold that post.

On May 17, 1954, the Supreme Court handed down a unanimous decision, ruling that racial segregation, specifically in public education, was unconstitutional. This was a major win for the Civil Rights movement. The Chief Justice at the time, Earl Warren, wrote the decision:

“Does segregation of children in public schools solely on the basis of race, even though the physical facilities and other “tangible” factors may be equal, deprive the children of the minority group of equal educational opportunities? We believe that it does. …

“Segregation of white and colored children in public schools has a detrimental effect upon the colored children. The effect is greater when it has the sanction of the law, for the policy of separating the races is usually interpreted as denoting the inferiority of the negro group. A sense of inferiority affects the motivation of a child to learn. Segregation with the sanction of law, therefore, has a tendency to [retard] the educational and mental development of negro children and to deprive them of some of the benefits they would receive in a racial[ly] integrated school system.”

What it came down to, was that while the Plessy v. Ferguson ruling was correct in saying that “equal” was constitutional under the 14th Amendment, “separate” was not.

The aftermath was anything but idyllic. The integration of schools would continue to be fought over for another decade after the ruling came out. The Brown v. Board of Education of Topeka, however, would motivate the Civil Rights movement that would flourish during the late 1950s and throughout the 1960s.