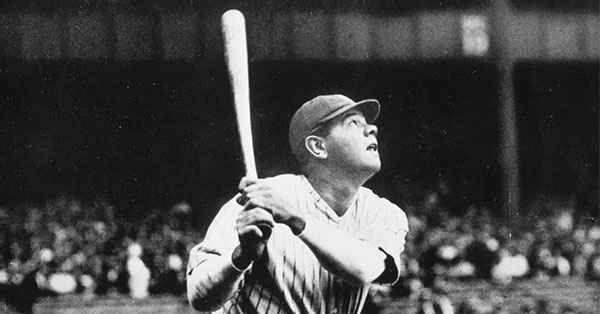 Babe Ruth may be the best baseball player ever to play the game. That is, of course, highly debatable, depending on how you measure “greatness.” For sure Ruth is one of the most well-known players of all time, and for very good reason: he was an exceptional baseball player.

He is best known for his time as a slugger for the New York Yankees, where he established some of the batting records that are still in place to this day. The two records that are still standing are his slugging percentage stat (.6897) and on-base plus slugging or OPS (1.164). If you’re not into baseball, neither of those numbers will mean very much to you, but to drastically oversimplify the meanings, both numbers have to do with the batting productivity of a hitter.

Over his 22 season career, he amassed dozens of awards and achievements including playing in the All Star game twice, playing in seven World Series, winning the MVP once, and amassing 12 AL Home Run leader awards.

On June 2nd, 1935, Ruth retired from baseball. His later years in the League were dotted with arguments with management for both the Yankees up until 1934 and the Braves in 1935.

His retirement was always inevitable around the mid 1930s, if for no other reason than Ruth had managerial ambitions. Specifically, he wanted to manage the Yankees. Baseball experts agree that Ruth never really had a chance at that job. Even at the time, pundits agreed that he was a long shot as the Manager at the time wasn’t going to be replaced (in fact, Joe McCarthy would manage the Yankees for 12 years after Babe left). Not discouraged at all by the unlikelihood of the promotion, Babe Ruth issued an ultimatum to the Yankees, basically saying that he wanted to be the manager or else he would retire.

The Yankees traded him instead. Ruth was never really going to fit in well with the Boston Braves, if for no other reason than they only wanted him for his name. He only played in a few games in the 1935 season, and during that time period argued with Judge Emil Fuchs the owner of the Braves almost constantly. In defense of Fuchs, he was about to lose his team. They couldn’t draw any fan base at all, and couldn’t afford the rent on their ball park. The MLB would take over the club at the end of that season.

After a final argument with Fuchs, Ruth retired. He had hopes that he would be able to draw enough attention to get into a management position, but he received no offers. Some of this can be put on his wife of the time, who seemed to be very controlling. But mostly, the disinterest came from Ruth’s own attitude over the years.

Outside of baseball, Babe Ruth is known as a big drinker and a womanizer. Because of his success on the field that out-shined anybody else who played at that time (or before), he garnered a lot of public attention. His larger-than-life personality guaranteed that his legend would exist even outside the specter of baseball. Ruth died in 1948 from throat cancer.