The Shameful History of Human Zoos 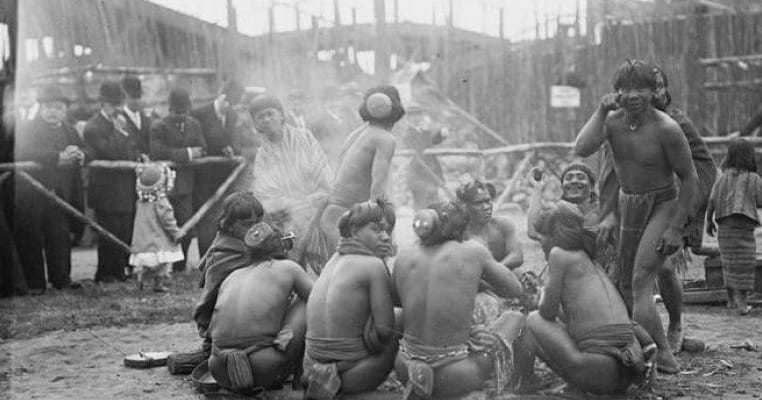 The Shameful History of Human Zoos

Before television, the internet, and the tourism industry, people had no way to experience foreign cultures in an immersive way. Entrepreneurs looking to make a profit and anthropologists who wanted to study these natives in the name of science decided that they could bring human beings from different cultures to the eyes of fascinated white people. They took native people away from their home lands and put them on display in makeshift villages while an audience gawked at them from afar. These were called ethnological exhibitions, or “people shows”. Today, they are remembered as human zoos.

Crowds of people flocked to see these foreign visitors display their customs, dances, and rituals. The human exhibits were always designed to contrast with western culture. The goal was to portray white people as the far superior race in every possible way. As time went on, human zoos cropped up in nearly every major city. The idea of white superiority soon spread, and human displays continued to crop up around the western world. Anthropologists began publishing books with their theories of human evolution. These supposed scientific discoveries on racial superiority contributed to the formation of the Nazi party, and they still linger today in modern day racism.

In 1899, fifty Zulu men were imported to the United Kingdom under the false promise of being given a mining job. Instead of working in the mines, they were ordered to act as natives in a British film called “Savage South Africa”. They were also put display at an exhibition in London in front of an audience. A man named Sir R. Reid saw the issues with exploiting human beings, and petitioned British Parliament to try to stop the importation of natives. However, this was incredibly fascinating for people and profitable for the organizers of the event. The film circulated in the English-speaking world, and the government did nothing to stop human exhibitions.

Anthropologist William McGee decided that he wanted to create a human zoo and premiere it at the 1904 World’s Fair in St. Louis, Missouri. His theory was that every race was a different stage of human evolution. African Pygmies were short in stature and lived in huts, so he theorized that they were at the bottom of the barrel in terms of human evolution, with white people being at the very top.

The largest section of the human zoo were made up of the Filipino Igorot tribes. After the Spanish-American war in 1898, the Philippines were annexed by the United States. This meant that McGee and other American human zoo organizers had easy access to exploiting the native Igorot people. Every so often, Filipinos were forced to cook dog meat every single day, knowing that white audiences would cringe at the idea of eating fido for lunch.

Of course, they did not want to just stop at the Filipinos. William McGree wanted people from all over the world, including South America, Africa, and Asia. He paid explorer Samuel P. Verner to traveling the world and bringing back human specimens that he wanted for his show at The World’s Fair, which began his global mission of collecting people like trading cards.

The Extraordinary Life of Ota Benga

Samuel P. Verner visited the Baschelel tribe in the Belgian Congo. They had captured a pygmy in a cage, and we planning to kill him. He negotiated the purchase for the man by exchanging a spool of wire and bags of salt. This was 23-year old Ota Benga. Ota Benga had dark skin, a short stature, and his teeth were filed down into spikes. Verner thought that he would make a perfect example of what a savage looked like. Ota Benga was displayed with several other pygmies, and they lived in their makeshift village huts.

At the World’s Fair, visitors would pay the pygmies tips, which gave them enough money to purchase souvenirs from other pavilions. They picked up the habit of smoking cigars, and loved wearing stylish top hats. This made the white event organizers very angry, and they would snatch these things away from the men, because it contradicted the portrayal that they were natives who were incapable of appreciating the finer things.

According to Samuel P. Verner, he brought all of the pygmies, including Ota Benga, back to the Congo after the fair was over. However, by the time he returned home, he was devastated to discover that Benga’s tribe had been wiped out by rivals. The other pygmies were apart of the Batwa tribe, but the rejected bringing in an outsider like Ota Benga, so he had no choice but to return to America with Verner. In his mind, “America” was the wonderful World’s Fair, where he would at least get to interact with friendly people and smoke cigars. The reality was so much worse.

The director of the Bronx Zoo, William Temple Hornaday, know that Ota Benga was good with animals, so he offered him a job as a caretaker. However, fascinated people began to gather to watch the pygmy, and Hornaday realized that he could profit from creating his own human exhibition in New York City. Ota Benga was put on display in the monkey cage, and he was declared to be a missing link. Crowds of people every day pointed and laughed at him.

Reverend James Gordon protested Ota Benga’s display, and petitioned to have him released so that he could be converted to Christianity and shown how to live a civilized life. In 1906, he was removed from the zoo and given to an orphanage, despite the fact that he was a full-grown man. He was eventually brought to Lynchburg, Virginia to live with a host family. The community of Lynchburg tried to help him adjust to life, but he was very unhappy with being pushed to fit in. Ota Benga said that if he could not return home, he would at least send his soul to Africa. In 1916, he borrowed a gun, and committed suicide.

After Human Zoos had become a popular attraction throughout the western world, more and more white people began to gather enough first-hand experience to believe that they were, in fact, a superior race. Madison Grant was a lawyer and self-proclaimed anthropologist, and he wrote about his personal opinion on eugenics. He believed that whites were at the top of the evolutionary chain, and that they had a responsibility to take natural selection into their own hands. Eugenics is the belief that people with disabilities and non-aryan blood should be exterminated to make way for the master race. Grant published his book in 1918 called The Passing of The Great Race, or the Racial Basis of European History. It became a bestseller among racists.

Before writing his own book, Mein Kampf, Adolf Hitler religiously studied Madison Grant’s book. He was said to have even written Grant a fan letter, gushing that it was “his Bible”. Arguably, Madison Grant may be to blame for the core of Hitler’s philosophy. He inspired a madman to begin worldwide genocide. Even after World War II was over and members of the Nazi party stood before the Nuremberg Trials, Madison Grant’s book was used as evidence to defend their actions. Nazis claimed that their inspiration for white superiority came from an American, so they could not understand why it was considered shameful in the United States.

Despite the fact that the Nazi party was banned in Germany after World War II, and it is now considered to be taboo to address the existence of racial differences, modern-day Germans still struggle to recognize when they are being racist. In 2005, the Augsburg Zoo in Germany decided to put on a display of tribal African dances next to the primate exhibit. It was almost a carbon copy of what happened with human zoos. Despite the public outcry about the human display, the Zoo continued to defend themselves, saying that they did not believe what they did was racist or inappropriate.

Unfortunately, the idea of putting native cultures on display in order to feel better about one’s own race and culture has not gone away. The Andaman Islands are off the coast of India, and they were colonized by the British Empire. The natives on the islands were the Jarawa tribe, and they were given a reservation so that they can maintain their way of life. However, a loophole in a highway that runs directly through the reservation means that tour busses and trains filled with tourists can pass by and stare at the Jarawa as if they are on safari. Despite the fact that signs prohibit any photographs or interactions, tourists often throw candy and tobacco to the Jarawa as they pass by, proving that the exploitation of native people is still being used as a form of entertainment to this day.

A Human Zoo on the World’s Most Dangerous Island? The Shocking Future of North Sentinel. Jim Dobson. Forbes. September 28, 2015.

Looking Back at the Strange Case of Ota Benga. Farai Chideya. NPR. October 9, 2009.