The Real Captain Morgan Was an Unstoppable Privateer 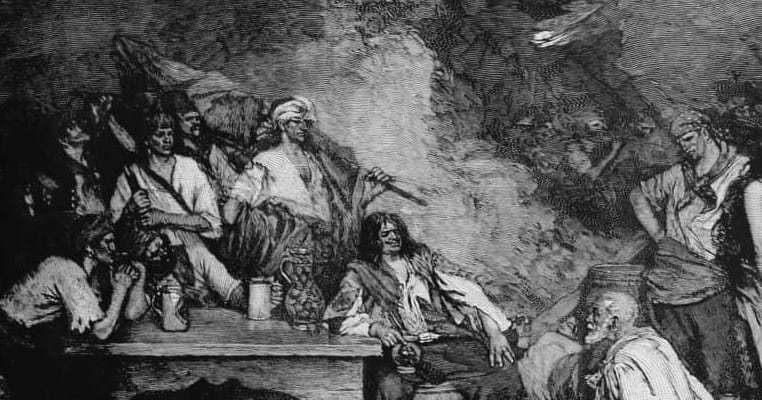 The Real Captain Morgan Was an Unstoppable Privateer

In 1944, the Seagrams corporation created the Captain Morgan Rum Company, and purchased rum distilleries in Jamaica. For their labels, they commissioned an illustration of a pirate wearing a red coat with long, black curly hair. For years, millions of bottles of Captain Morgan rum have been sold around the world, and the name became synonymous with the alcohol. Over time, people began to assume that this was a character created by Seagrams, much like all of the other fictional food characters like Ronald McDonald or Lucky the Leprechaun. The true story of Sir Henry Morgan was lost with time, and most people do not realize that he was a very real person, and he went on epic adventures on the open sea pillaging gold in the Caribbean during the Seventeenth Century.

While most people remember Henry Morgan as a pirate, he was technically a buccaneer, also known as a privateer. These were private contractors who were hired to do everything that a pirate normally does, but it was considered to be legal. The English government hired privateers to help them in battles against their enemies, since they were experts in sword fighting and finding hidden treasure. While being a “pirate” was considered to be a criminal profession, becoming a “privateer” was the loophole for members of the upper-class to have it as a job, and it was totally acceptable.

Henry Morgan grew up in Wales to an upper-class family. For centuries, his ancestors lived in an estate called Tredegar House. Like most boys in the 1600s, Morgan was awestruck by the epic stories of pirates pillaging the Caribbean, and he decided that was what he wanted to be when he grew up. As a young adult, he traveled to the islands to make his dreams come true. It turns out that he wasn’t the only upper-class person to become a privateer, either. His teacher and mentor was named Sir Christopher Myngs, and he taught him the pirate code, as well as the ways of being a “gentleman adventurer”.

Nearly all privateers had to get their jobs through an organization called The Brethren of the Coast. These 1,500 men would sometimes fall in and out of the legal status of “privateer”, and slip back into “pirating” when they were not given a new assignment. The group was very democratic. Each and every employee was given an employee contract, and they were allowed to vote on the captain they wanted to represent them. Henry Morgan was so enthusiastic about being the best privateer he could be, he was just 23 years old when hundreds of men voted for him to be their leader.

In the contracts that Henry Morgan created for his crew, he promised to pay each of them 150 Spanish gold coins, which were known as “pieces of eight”. Just one of these coins was worth the equivalent of $66, so that meant each privateer was going to earn nearly $10,000 just for one mission. On top of that, if they were injured during battle, they were paid a bonus. For example, if a pirate was stabbed in their eye, they would get an extra 100 pieces of eight. If they lost an arm or a leg, they got an extra 500 to 600 pieces.

Morgan became famous for successfully pillaging hundreds of thousands of coins. So, it only made sense that the governor of Jamaica approached him specifically to ask for him and his crew to attack Panama, which was being controlled by the Spanish. At the time, Jamaica was an English territory, and they were competing with the Spanish over land in the Caribbean and South America. So, it was easy for Henry Morgan to agree to take on this gig, but it was far from easy. Dozens of men from Morgan’s crew died from tropical diseases, infection, and malnutrition in the jungle of Panama before they could even reach the actual city of Panama.

The Sacking of Panama

When they finally reached the city, Captain Morgan and his band of privateers engaged in battle with the Spanish army. The only written record of the battle came from a writer named Alexandre Exquemelin, who was there at the time. He was a doctor in Morgan’s crew, and he eventually published a book called Buccaneers of America, telling the stories of all of the different missions he was present for. In Exqumelin’s version of the story, he writes that Morgan was totally ruthless. He apparently tied nuns and priests together to shield him from the bullets of the Spanish army, and forced women to be his pirate-wife for a night.

After the book was published, Henry Morgan became famous all over the world, and he sued Exquemelin for libel. Morgan claimed that the majority of the story was an outright lie that was elaborated to be more exciting, and it made him seem like an evil person. So, there is no telling just how much of Exqumelin’s story was hyperbole. The one detail that cannot be debated, however, is the fact that Morgan defeated the Spanish, and walked away with a massive fortune. While the exact number is not known, we know that he walked away with anywhere between 250,000 to 400,000 pieces of eight, which would be tens of millions of dollars.

Morgan and his crew sailed back to Jamaica as victors. They were greeted on the shore with crowds of cheering Englishmen. Little did they know that while they were gone, England and Spain had set aside their differences over territory, and signed a peace treaty. This was years before e-mail and cellphones, of course, and there was no way Henry Morgan could have gotten a letter delivered in the open sea or in the middle of the jungle. He accidentally attacked one of England’s allies, even though the government hired him to attack them in the first place. This was a big “whoops” on England’s part, but they kept the money, and arrested Captain Morgan for being a pirate.

As a criminal, he was deported back to England, where he was expected to serve time in jail in London. However, once he arrived in the city, word had already spread about his victory in Panama, and how it was going to help the Jamaican colony thrive. Henry Morgan was a celebrity, and people forgave him for the mix-up. He was sent free, and immediately began falling into the life of a gentleman. He was invited to tons of parties, and earned a great reputation in London. While illustrations of Morgan show him as a man with a handlebar mustache, the portrait he had painted in London shows that he was actually still incredibly young-looking and baby-faced with a clean shave. Women everywhere could not resist this charming, handsome gentleman pirate. Even King Charles II wanted to be his friend. After hanging out together and hearing all of the stories of his bravery, King Charles decided that he should be knighted as Sir Henry Morgan.

Since times were changing with the treaty with Spain, King Charles knew that it was important to get rid of illegal pirates from the Caribbean. After hearing about the mixup with the former governor, he decided to fire him and put Sir Henry Morgan on the job, instead. Morgan returned to Port Royal, Jamaica, and began to organize groups of privateers to go on missions. He was so good at his job, and so well-respected in the community, that Port Royal became almost like a seventeenth century Las Vegas. There was gambling, drinking, prostitution, music, performances, and nearly everyone there was a pirate, privateer, or buccaneer. Throughout Europe, it gained the reputation of being the most sinful city in the world, but it was also the richest, with brand new buildings and state-of-the-art ports for the newest ships in the Caribbean.

Now that he was a rich man, Henry Morgan purchased a mansion and several sugar plantations in Jamaica, and he hired servants and slaves to work his farms for him. He got married, and bought a second home in Wales, so he could spend time with his family there. He continued to drink rum, party, and have the time of his life, until he died at 53 years old. When he passed away, boats were docked in Port Royal from all over the Caribbean, as hundreds of pirates showed up to pay respects for him. The ships fired what was most likely the loudest 22-gun salute in history.

Port Royal was never the same without Captain Morgan…Literally. Just four years later, one of the biggest earthquakes in Caribbean history struck in 1692. The earthquake caused a tsunami, and thousands of people died. Those beautiful buildings, the expensive boats, and even the cemetery where Morgan was buried crumbled in the earthquake, and then got washed out to sea. Today, the sinful city of Port Royal is still underwater, and the remains can be seen by scuba divers off Jamaica’s coast.

.Where did we find this stuff? Here are our sources:

The Sack of Panamá: Captain Morgan and the Battle for the Caribbean. Peter Earle. 2007.

The Pirate King: The Incredible Story of the Real Captain Morgan. Graham A. Thomas. 2015.

The Buccaneers of America. Library of Congress.