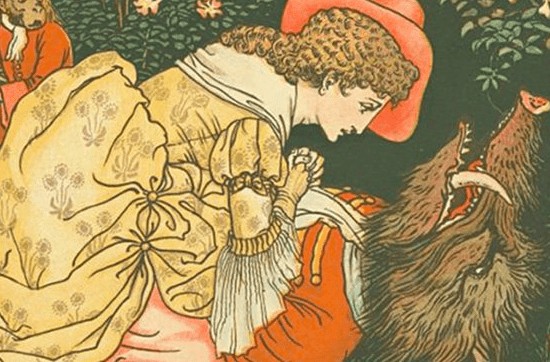 According to anthropologists from Durham University, some fairy tales like Beauty and the Beast go back over 4,000 years. It would seem that the story of a beautiful girl melting the heart and transforming an ugly beast really is a tale as old as time. Even famous children’s authors like the Grimm Brothers copied fairy tales that were passed down for generations. In 1740, a French novelist named Gabrielle-Suzanne Barbot de Villeneuve wrote the story of Beauty and the Beast is a collection of children’s fairy tales. From then on, new versions of the story would become transformed as the years went on. While this theme of a beautiful girl falling in love with a beast was passed down for generations, it actually came true at one point in time, and it’s very likely that Gabrielle Suzanne Barbot de Villeneuve was inspired by Petrus and Catherine Gonsalvus.

“Petrus” Gonsalvus was born in 1537 with a condition called hypertrichosis, which meant that hair grew all over his entire body and face. This gave him the appearance of being a werewolf-like creature, and he was treated like a freak of nature. At the time, people believed in a legend of “wild men”, which is a lot like the legend of Sasquatch. They believed that this boy was a child of one of these wild men and that he was some sort of human-ape hybrid monster.

King Henry II of France loved to collect oddities, including human “freaks”. At that time, it was even a symbol of wealth and status for royals to own dwarves as court jesters. So, when he was presented a 10-year old savage boy discovered in Spain, as a gift. At that time, the boy could not speak, even when they tried to communicate with him in Spanish. He was clearly a feral child who was abandoned because of his condition. He most likely spent his life being feared by people and put on display in chains… The King ordered the creature to be taken to the dungeons, and his physicians went to study him more closely. The boy could barely speak, but he knew his own name. He whispered “Pedro Gonzalez.”

The king decided to re-name him Petrus Gonsalvus because it sounded more like a name fit for nobility. Everyone expected him to be wild and scary like in the legends of The Wild Man, but the doctors could see that this was just a human boy, and he was scared. At that time, scientists would have no idea that hypertrichosis comes from an abnormal 8th chromosome. So besides having an abnormal amount of hair, he was a totally normal human being.

Petrus remained calm, and on his best behavior. Once the King learned that this was this boy could speak, he decided to conduct an experiment to see if a “wild man” can be tamed. He set out to give him a proper nobleman’s education. Petrus Gonsalvus learned how to read, and even studied complex subjects like Latin. His tutors were impressed with how intelligent he actually was, and they all grew to like him. He was given some of the finest clothes to wear and attended royal Court like any other gentleman.

When Petrus grew up, he was one of the very few men in royal court who was not married, for obvious reasons. After Henry II’s death, his widow, Catherine de Medici, took the throne. She loved to be a matchmaker with people in the royal court, so set out to make sure Petrus got married. She interviewed at least a dozen girls and found a beautiful woman named Catherine, who was the daughter of one of the servants. They would have never allowed the daughter of a nobleman to marry a beast. Considering that the legend of “beauty and the beast” had already been around at that time, maybe Catherine de Medici wanted to see if this experiment could work. Was it really possible for a beautiful young girl to see through this terrifying hairy face?

Young Catherine had no idea what she was getting into. She never got to meet Petrus beforehand, so she assumed that she would be matched with a normal gentleman. In fact, she must have felt flattered to know that her beauty bought her a ticket to a noble marriage. One can only imagine her shock and horror to see that the Queen was ordering her to marry a monster. Just like Petrus, she was held captive by the Queen’s orders and really had no choice or option to divorce him. The one and only saving grace in this situation would be the fact that Catherine’s parents were servants in the castle. At the very least, she could see her family and have a shoulder to cry on.

Petrus would have been used to her reaction because he experienced it all his life. He was a gentle, intelligent man who never hurt a fly. Even though Catherine would have been afraid in the beginning, they did eventually begin having children together. While there are no written journals or evidence to prove so, it’s even possible that they may have fallen in love. There is one portrait in particular where Catherine’s hand is on Petrus’ shoulder. According to sociological historians, that sort of gesture was not always present in images of couples, and it would have signified that they actually were in love.

They had a total of 7 kids together. Their first two children were normal, healthy baby boys. They continued to have kids, and eventually, some of them did have hypertrichosis. Portraits were commissioned of the family, but the normal children were ordered to be kept out of the picture. The Queen wanted to keep up the appearance that this was a successful experiment in taming the “wild man”, and giving birth to “hybrid” children. The images of their family were sent off to nobles as gifts, and they were truly fascinated. Pictures of Petrus and his family hung in cabinets of curiosities. For some, a picture was not enough.

Four of their children had hypertrichosis like their father. Since Petrus and his family were like property of the Queen, they were sold to other members of the nobility, and it was clear that Petrus and Catherine were just being used to breed these unique babies. While they were not locked in a tower-like in the Beauty and the Beast story we know and love, both Catherine and Petrus were prisoners of the nobility’s desires. Thankfully, their children were treated very well in their new homes. They received high-quality educations, and they were given plenty of food to eat, expensive clothes, access to the best doctors, and beautiful homes to live in. Considering that they were the children of a man with an abnormality and a woman who was from the lower class, their children actually lived a life of luxury compared to how their lives would have been if their parents were free.

One of the daughters, Antoinetta, was given to a noble family in Bologna, Italy. A doctor named Ulisse Aldrovandi visited her, and examined her body, taking notes about the hair on her body, and sketching her. Thankfully, he described her as a “girl” instead of calling her some kind of animal or beast. In the drawing, Antoinetta is wearing a beautiful dress that would have been very expensive, and she has leaves and flowers in her hair, almost like a crown.

In a portrait of Antonietta, she is holding a piece of paper that explains who she is, and what happened to her- as if the painter knew that future generations would want to know who she was, and who she was sold to. There are other sketches of hairy girls, which are most likely the older sister Francesca. A third girl, Madelina, and a boy named Enrico were also born with hypertrichosis and sold to noble families, but there are very few documents about what happened to them. After years of using the couple as a baby-making factory and selling their family as entertainment, Catherine and Petrus were finally allowed to retire under the care of a Duke in Italy.

Even though their family had been torn apart, there are documents that show that they tried their best to enjoy the life they had left in freedom. Petrus was present at the church to see his grandchildren get baptized. Documents recorded Catherine Gonsalvus’ death, as well. However, there was never any official death record for Petrus. Historians believe that this is because he may have never been allowed to have a proper Christian burial, since “animals” did not get the same sacraments as humans. At the very least, he would have been surrounded by his family, who loved him very much.