The Fantastic True History of Unicorns 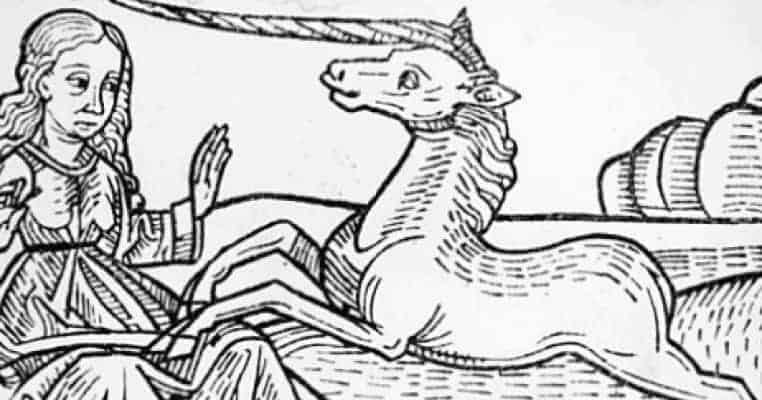 The Fantastic True History of Unicorns

Unicorns are magical creatures that appear in just about every fantasy novel, and several fairy tales in recorded history. These stories have even appeared all over the world. According to legend, unicorns could only be tamed by a maiden with a pure heart. Their horns had the ability to purify liquid, and in some legends, their horns could heal wounds. This legend was enough to inspire people to hunt for this elusive creature for centuries. Even well-educated members of royalty purchased what they believed were unicorn horns, and scientists have treated the possibility of their existence very seriously in the past. But did this animal ever really exist? Was it hunted out of existence like the Dodo bird, or was it truly a figment of someone’s imagination?

Elizabeth I, Henry 8th, and Charles 9th all owned unicorn horns…At least, they thought they did. People believed that they could take poison out of liquid. Some even believed that the magical horns would help people live forever. So it was essential for royalty to have cups made out of what they believed to be unicorn horn, but it was usually really ivory from elephants, imported from India. Other times, royals purchased horns that were taken from narwhals.

At the time, explorers would return from their journeys to India and other far-off lands. They published books and travel journals that explained the new species of animals that they spotted on their trip. However, people were skeptical, even back then. They did not just naively fall for claims of fantastic creatures. The vast majority of the animals in these books were real. But back then, people thought some of these animal species were so insane-looking, they refused to believe they existed. One perfect example of that was a giraffe.

In modern times, everyone has grown up going to a zoo and seeing a giraffe in person, or they at least have the opportunity to see it on TV. So of course, it’s easy to believe they are real. But for people in the past who were looking at drawings of the animal, it was hard to believe a horse-like-creature could exist, or that it really had such a long neck that it could eat the leaves from the top of trees with a long tongue.

Since unicorns are really just white horses with horns, their existence was actually very believable for most people, compared to a giraffe. Several explorers from India were looking for unicorns, and many of them claimed that they actually managed to spot one, but all of their accounts of the animal were vastly different from one another. In many cases, they were probably talking about a Rhinoceros. A man named Bernhard von Breydenbach wrote the latest known record of an apparent unicorn sighting in 1486. He also included another creature called a manticore, which was a lion with a human head. Obviously, this guy was not the most honest person, or he was taking second-hand accounts from local testimonies.

The Word of God

Explorers were not the only ones to write about these horses with a single horn. Unicorns are mentioned a whopping 8 times in the Bible. Today, the only edition of the Bible that still has the word “unicorn” is the Authorized King James version. We now know that this was an incorrect translation made when scholars were translating Hebrew to Greek.

The original transcript of the Bible mentioned a one-horned animal called the “re’em” multiple times. The Greek scholars knew through context clues that the animal was strong, and it had one horn. This sounds a lot like a rhinoceros. But other passages put the re’em in the same category as cows and oxes. It describes the re’em calves skipping, which is not something baby rhinos tend to do, and it sounds more like a baby goat. Since the re’em had been hunted out of existence, no one could really pinpoint what this animal actually was. Since this sounded like a horse or goat-like creature with one horn, they translated it as “unicorn”, because that was the closest word they knew that fit the description. Little did they know, adding the word unicorn caused generations of people to believe the Bible was giving them solid proof that these mythical creatures actually existed at one time in history.

Around the 1400’s, The Middle Ages were in full swing, and Christianity was the main religion in Europe. Since nearly everyone was reading the Bible, unicorns became very fashionable. It was common for Renaissance artists to be commissioned to paint portraits of upper-class ladies with pet unicorns. Even Leonardo Da Vinci drew a sketch of a woman with a unicorn. One painting by Raphael shows a woman holding a pet unicorn, which was painted over the original image of her lap dog.

Later, in the 17th Century, The Catholic Church was going through a lot of changes. The painting by Raphael was covered up and turned into Saint Catherine. In her lap, she held the wheel of torment, which symbolized how she died. The church was so embarrassed by the mix-up in translations, that they wanted to replace the history of unicorns with stories of saints. They also edited out the word “unicorn” completely from newer editions of the Bible.

Since the church wanted evidence to be erased, we may never get to see all of the whimsical unicorn-related artwork that once existed. However, many pieces still survived in private collections that passed down the works from generation to generation.

The Cloisters is a castle in the middle of New York City that was once owned by the wealthy Rockefeller family. It is now managed by the Metropolitan Museum of Art. Walking through its doors feels as though you have stepped back in time somewhere in Europe. One of the many art pieces that the museum has on display is a huge tapestry that depicts the full details of hunters who captured unicorn.

In the beginning of the story, hunters spotted a unicorn in the forest that purified water with its horn. All of the other animals in the forest began to drink from the stream, too. It was captured in the wild and placed a “hortus conclusus”, or fenced garden. A young maiden sets the unicorn free, and the hunters are angry with her. They go after the creature with their hunting dogs. The unicorn fights back, stabbing one of the dogs with its horn. The hunters realize that the unicorn no longer trusts them, and it will never go with them to the fenced garden, so they have to kill it with their spears, and take its horn to possess its power. There are chunks of the tapestry missing, but there are small clues as to what the rest of the story may have been.

There are two ways to interpret this story- literally, and figuratively. Someone who was looking for evidence of real unicorns one point in history could take this as proof that they were a species that did actually exist, but they were hunted to the point of extinction, because of the belief that their horns were magical.

The figurative version of this tapestry comes from the strong surge in Christianity during the Middle Ages. Some historians believe that the whole story on the tapestry of the unicorn and the hunters was fiction, and it was one big allegory for Adam and Eve. They interpret the maiden as Eve, who released the innocent unicorn from the fenced garden, similar to the act of original sin in the garden of Eden. The wounds that the hunters inflict on the unicorn are reminiscent of Jesus dying on the cross for the sins of the world. There is a much smaller tapestry in a different collection with a very similar scene, but all of the details are given very clear Biblical labels, so that there is no room for interpretation. However, it seems like a copy of the original that now hangs at The Cloisters. is possible to find Biblical overtones in almost every single story, even Harry Potter. But that doesn’t necessarily mean that was the creator’s intention.

In 1827, the first giraffe made its way overseas to France, and it was put on display at a zoo. This was a shock to all of the people who had been skeptical of its existence. In the minds of those people, if a giraffe was real, what’s to stop a unicorn from being real? How much stranger is it, really, for a horse to have a horn? Especially when creatures like goats and rams have horns, it makes the idea far less crazy, and more like the possibility that there was a long-lost species at some point in time. This is why, even in the 1800’s to early 1900’s, fantasy authors have still included unicorns in their stories with a hopeful attitude that maybe, one day, there will be evidence to prove that they exist.

The Quest for the Unicorn (Documentary). Dash Films. YouTube.

In Our Time: The Unicorn. BBC Radio.

The Many Identities of Raphael’s “Lady with a Unicorn”. Allison Meier. Hyperallergic. 2016.