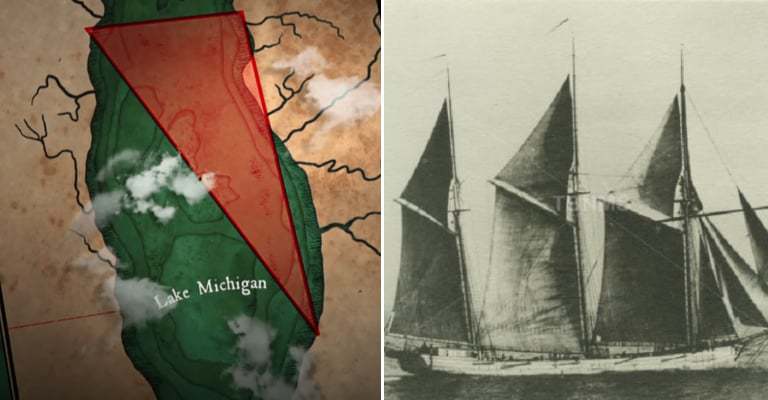 When you think of Lake Michigan, what comes to mind? Possibly a clear blue mass with picturesque sailboats? Or shimmering skyscrapers reflected in the mysterious blue waters? One thing that most people probably do not think of is the expanse of deadly waters hidden with in responsible for numerous disappearances. The mystery of the Lake Michigan Triangle has baffled researchers for decades. Since people have braved the waters, the Great Lakes have swallowed up more than a thousand ships. Of those, 150 are still unexplained mysteries- the vessels and passengers disappeared without a trace.

Scientists and other researchers have tried to crack the code on why this keeps happening, but the expanse in which these disappearances occur is larger than you would expect. As they dive deeper trying to find answers, they uncover more questions lying beneath the surface. Disappearances, a mysterious underwater Stonehenge, and what may be an inland Bermuda Triangle dubbed the “Lake Michigan Triangle” may all have been to blame.

The History of Vessels on the Great Lakes

Since the Great Lakes’ discovery, they have served as a means of connecting the middle of the North American continent to the Atlantic Ocean, opening up an important trade opportunity to use as a major water transport corridor for centuries. The first ship recorded to have traveled the upper Great Lakes is the 17th century brigandine, Le Griffon. However, this maiden voyage did not end well. The shipwrecked when it encountered a violent storm whilst sailing on Lake Michigan. Over the next few centuries, an estimated 6,000 – 8,000 ships sank to the bottom of the Great Lakes with around 30,000 lives lost. Some of these ships mysteriously disappeared without a trace, one of them being the Thomas Hume.

The first occurrence in the Lake Michigan Triangle was recorded in 1891. The Thomas Hume was a schooner that was built in Manitowoc, Wisconsin, in 1870. The ship was christened as H.C. Albrecht, in honor of its first owner, Captain Harry Albrecht. In 1876, the ship was sold to Captain Welch from Chicago. In the following year, the ship was bought by Charles Hackley, a lumber baron who owned the Hackley-Hume Lumber Mill on Muskegon Lake. The ship was then renamed as the Thomas Hume in 1883, after Hackley’s business partner. The Hume would make many successful trips across Lake Michigan until May 21, 1891, when it disappeared, along with its crew of seven sailors. Not even a trace of the boat was ever found. The Hume was on a return trip from Chicago to Muskegon, having just dropped off a load of lumber. The Hume would never be seen again until 115 years later until 2006, when the A&T recovery diving team found it in the southern part of the lake, in remarkably good condition.

Other notable shipwrecks include the SS Rouse Simmons, a ship built in 1868 that was primarily used to haul lumber across Lake Michigan. It would sink on November 22, 1912, carrying a load of Christmas trees from Michigan to Chicago. The SS Appomattox, one of the largest ships to sail Lake Michigan at 319 feet, was used to haul iron ore and coal all over the Midwest. It would fall into some bad luck on November 2, 1905, however, as it would run aground near Milwaukee due to smog from steam smoke produced by ships at bay. Between 1927-1949 the SS Carl D. Bradley was the largest ship on Lake Michigan at 639 feet. Dubbed “Queen of the lakes” (a term coined for the largest ship on the lakes) the ship was used as an icebreaker and freighter to haul limestone from Lake Superior and Lake Huron to Lake Michigan’s deepwater ports.

On November 18, 1958, the Carl D. Bradley was returning from Gary Indiana heading north in upper Lake Michigan when a massive Gail storm hit. The storm-battered the massive freighter until the hull began to crack in two. It would sink “Titanic style” into Lake Michigan, landing in two pieces that would jut upwards from the bottom of Lake Michigan. Perhaps the most tragic, however, is the story of the Lady Elgin. The Lady Elgin, was a 252-foot wood hull steamship. Mostly a passenger ship, the ship would also haul domestic cargo as well from time to time. The ship would soon become famous as on September 8, 1860, the ship would collide with the much smaller, 129-foot schooner, named Augusta. The Augusta would sail back to harbor relatively unscathed but the Lady Elgin would eventually and continue to take on water until she finally could not bear any more weight and would begin to sink. This would result in the most open water deaths on the Great Lakes, around 300 people would lose their life.

When we think of Stonehenge, we tend to think of England. Rolling green fields with massive stones arranged in circles that expand the further you go from the center of the monument. But what you never hear of – or probably never even knew existed – is America’s Stonehenge. While scanning underneath the waters of Lake Michigan for shipwrecks, archaeologists Mark Holley and Brian Abbot found something a lot more interesting than they bargained for: in roughly 40 feet of water, they discovered a series of stones arranged in a Stonehenge-like manner, and one outlying boulder with a prehistoric carving of a Mastodon. A mastodon is a furry, elephant-like mammal that first appeared 20 million years ago, roaming the earth until roughly 12,700 years ago. In order to satisfy Grand Traverse Bay’s Native American community, whose interests are to minimize the number of visitors to the site, and to preserve the location of his research, the exact location is kept a secret. Could these ancient rock formations play a role in some of the mysterious weather patterns and happenings that have been recorded and seen on Lake Michigan?

The Lake Michigan Triangle And The Many Questions It Raises

Lake Michigan from a distance seems to be a tranquil body of water that is more like a sea than a lake. Lake Michigan is a part of the massive North American chain of Great Lakes. They include: Lake Superior, Lake Michigan, Lake Huron, Lake Erie, and Lake Ontario. At 307 miles long and 118 miles wide, Lake Michigan is the second largest of these lakes by volume, and third-largest by surface area. It is the only Great Lake completely within US boundaries. Averaging 279 feet deep and at its deepest, 923 feet, it boasts 1,640 miles of shoreline on which 12 million people call home. But there is one statistic of this Lake that many do not know about. Stretching westward from Manitowoc, Wisconsin, east towards Ludington, Michigan, and south towards Benton Harbor, Michigan, lies what is known as the “Lake Michigan Triangle”. The Lake Michigan Triangle shares characteristics of the Bermuda Triangle. The Lake Michigan Triangle is home to the Lake Michigan Stonehenge which was found beneath its northern territories, odd weather patterns, strange happenings, and peculiar events.

One such example of the peculiar events is the mysterious disappearance of Captain Donner. On April 28, 1937, Captain George R. Donner vanished from his cabin, after guiding his ship through icy and perilous waters. The captain retreated to his cabin to rest, and about three hours later, a crew member went to alert him that they were nearing the port. The door was locked from the inside and there were no responses to any call given through the solid wooden door. The shipmate broke into the cabin, only to find it was barren. A search turned up no clues, and to this day Donner’s disappearance remains unsolved.

Another harrowing mystery involves a plane… and a possible UFO. In 1950, Northwest Airlines flight 2501, which was carrying 58 people, crashed into Lake Michigan. At the time, it was the deadliest commercial airliner accident in American history. The pilot had just requested to descend to 2,500 feet “because of a severe electrical storm which was lashing the lake with high-velocity winds”. Soon after, the plane’s signal went black and disappeared from radar. To this day, not even a trace of the wreckage has been found. The crash left many experts scratching their heads and pondering possible causes. About two hours after the last communication with flight 2501, two police officers reported seeing a strange red light hovering over Lake Michigan, and disappearing after 10 minutes. This phenomena lead some to believe a UFO was to blame. Others seem to think it was a combination of unusual weather and pilot error.

Lake Michigan’s legends and tall tales are as vast and mysterious as the water itself. They bear a weight that is cumbersome to carry and difficult to bear. If you ever find yourself in the midst of this true freshwater sea, stay alert, and mind your P’s and Q’s. Lest you become a thespian performing in another tragic role in the endless tale of the “Lake Michigan triangle”.

Where Do We Get Our Stuff? Here Are Our Sources:

Click On Detroit – The Bermuda Triangle of the Great Lakes: The Lake Michigan Triangle

Daily Mail – Shipwreck Hunters Solve Mystery of The Missing Griffin: Wreckage Of ‘Cursed’ Vessel That Sunk in Lake Michigan on Its Maiden Voyage Is Identified Nearly 350 Years After It Vanished

The Vintage News – The Lake Michigan Triangle: And You Thought the Bermuda Triangle Was Bad

Mysterious Facts – Mystery of Another Triangle Similar to The Bermuda