The American Divorce Colonies of the 1800’s 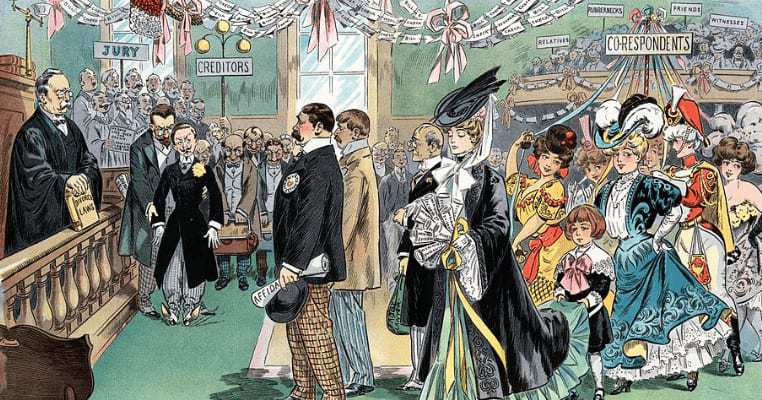 The American Divorce Colonies of the 1800’s

In the modern-day United States, there is a statistic that half of marriages end in divorce. Sometimes, people change as they grow older. Or maybe, they didn’t truly know their significant other as well as they thought before they tied the knot. As long as they are willing to pay for the legal fees, couples can go their separate ways. Even though it seems so common today, divorce was illegal for a very long time, because it was seen as forsaking the couple’s promise before God.

For years, it was considered an issue that was decided upon by the governor of each individual state. Not surprisingly, southern conservative states were the last to allow divorce. In South Carolina, divorce didn’t become legal until 1949! Some states, however, saw this as an opportunity to bring in more people- and therefore- more money. The states that welcome divorcees with open arms became known as “divorce colonies”, where couples had to move to another state together, just so they can break up.

Before divorce was commonly accepted in the United States, the process of getting a divorce was very expensive, and a judge would never allow it, unless it was the last resort. It was so rare, that these divorce hearings would also appear in local newspapers, as well. Destroying the union of marriage was seen as a huge scandal, and people could not have their privacy.

If two people were unhappy in a marriage, they sometimes decided to quietly separate in a mature, responsible way, but they were legally still married, and could never remarry someone else, unless their first husband or wife died. Instead of recognizing that divorce was necessary, the laws against bigamy, or the act of marrying more than one person, were enforced very strongly to stop people from leaving their spouse and getting remarried to someone else. Even separating from one’s spouse and living with a new partner they were not married to was still viewed as being socially unacceptable behavior. People were encouraged to stay together for the sake of their families, no matter how miserable they may be behind closed doors.

Each state had their standards about just how many times a man could beat his wife before they were allowed to get a divorce. In 1861, a woman filed for divorce after her husband beat her unconscious with a piece of wood over the fight they had. She wanted their pet dog to sleep in their bed, and he didn’t. The judge claimed that one or two violent incidents were not enough to get a divorce, and forced them to stay married.

Even when a divorce was granted, newspaper reporters always tried to put the blame on women, with headlines, even if the grounds were divorce were completely justified. In one case, the husband cut his wife’s throat with a knife, and she barely made it out alive. In another, they tried to paint a woman as spoiled and demanding of luxury items, and only briefly mentions that her husband beat her on a daily basis. For a woman, the only way to escape a bad marriage was to suffer a near-death experience, and to have the bravery to come forward and get help. In most cases, unfortunately, abused women kept quiet about their circumstances.

As you might imagine, there was a lot of “ghosting” going on. It was commonplace for wives to wake up one day to discover that her husband had abandoned her and the kids. Back then, it was so much easier for people to skip town and start a new life, too. Without a way to track down their husbands for child support, it left many women destitute. 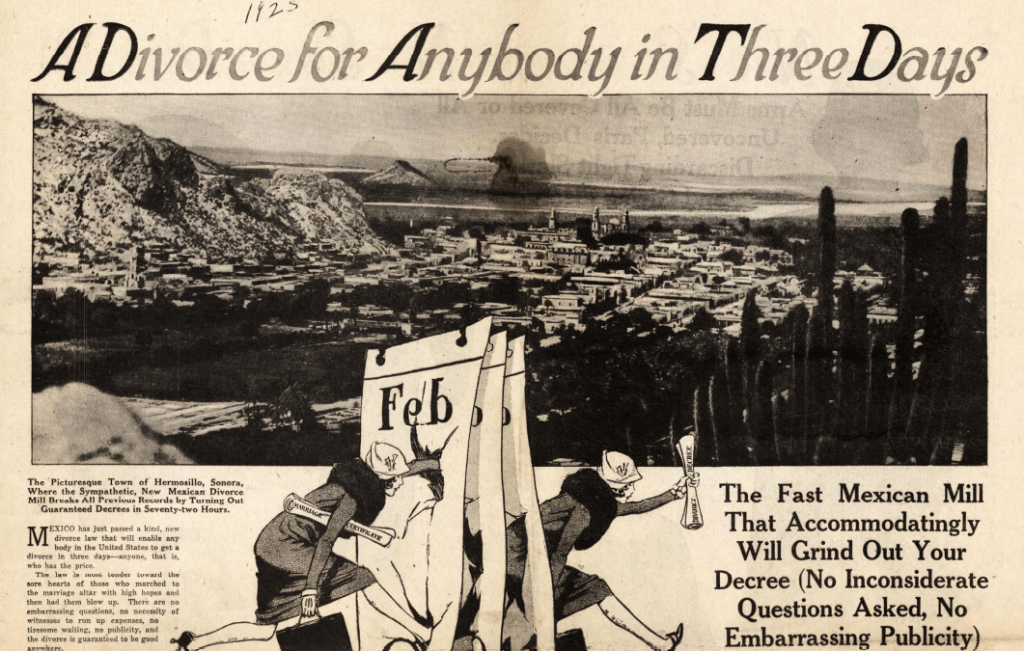 In the midst of this debate over marriage laws in The United States, wealthy American couples were traveling to Mexico to find a judge who would give them a divorce. The head of a newspaper described a change in law in Mexico; “A Divorce For Anyone In Three Days”. However, not everyone could afford to take time off of work and travel to Mexico.

This trend was picked up in select states in the US, and they became known as divorce “mills” or “colonies”. These were almost like tourist attractions, and people in the towns started businesses based around people traveling there just to get a divorce. Other states began to see the potential for making money.

In the 1850’s, Indiana allowed divorce, and it gained the reputation of becoming the new “Sodom” for “free love”. People who wanted to get a divorce could travel to Indiana, where businesses were waiting to accommodate young people. In the eyes of Christians, the states that allowed divorce were evil and sinful. Sex, alcohol, dance halls, and gambling were all commonplace in each divorce colony.

The Dakota territory (which eventually split into North and South Dakota) became an official state in 1861. They began to allow divorce in 1871. However, it was not as quick and easy as going to Mexico. The couple needed to become official residents of Dakota first, which meant they needed to live there for at least three months. The bigger towns in the state quickly began to fill up with travelers from around the country who planned to live in Dakota for three months, get their divorce, and leave. 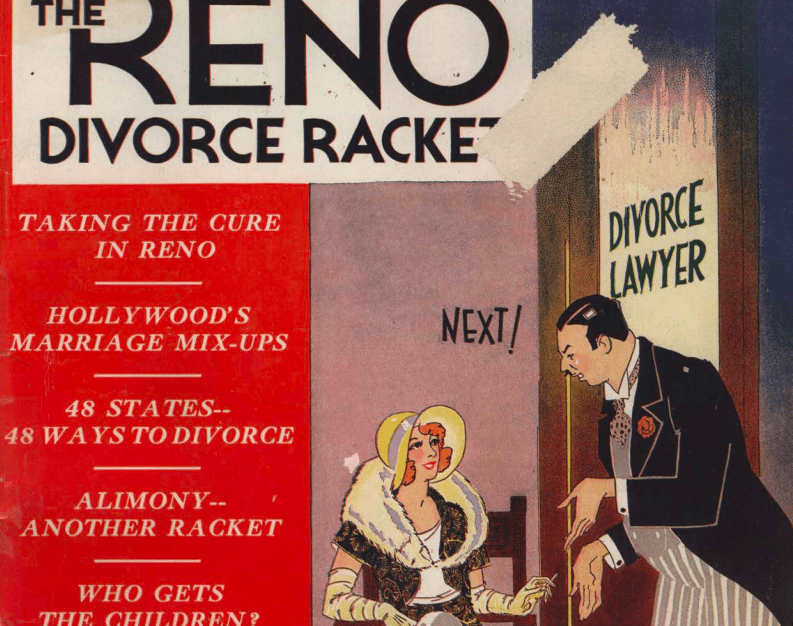 The city of Reno, Nevada became a go-to divorce colony for a quick and easy experience. It only made sense that the city of sin would be the place where people would go to end their marriage. There was even a magazine that circulated in Nevada called the Reno Divorce Racket, specifically written with topics geared towards people who were getting a divorce. These were like the very first self-help books about how to deal with ending a marriage.

With the increased demand for housing and resources in Nevada, the city of Las Vegas was founded in 1905. In the 1930’s, the Mafia began to build casinos there, and it was becoming more and more of a go-to place for people to indulge in becoming single again after their divorce. In 1939, Clark Gabel and his second wife traveled from California to stay in Reno and Las Vegas to obtain a quick and easy divorce, and it was covered in the Hollywood newspapers. This cemented it as the go-to and fashionable location to end a marriage. 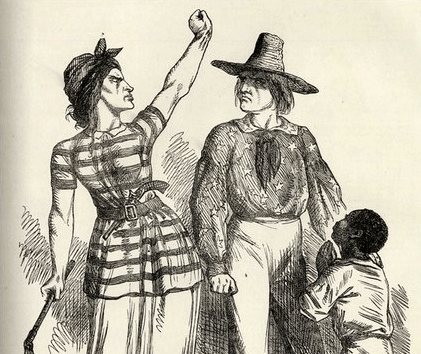 God and Country vs. Divorce

During a marriage ceremony, two people stand before God and promise to stay together “in sickness and in health, as long as they both shall live.” In the Roman Catholic church, marriage is one of the holy sacraments, as well. This is seen as a very serious promise that is made before God. Breaking that sacrament is enough to send someone to Hell.

During the Civil War, there were a lot of people comparing the fight between the north and the south to a married couple trying to get a divorce, and this intertwined with the debate over marriage law between two individual people. Even in the 1860’s, some people believed that when two different parts of the country are so vastly different from one another, there should be a legal means for them to separate without going to war, and letting so many people die. Others believed that as The United States, we needed to get over our differences and stick together.

President elect Abraham Lincoln also compared the quarrel to divorce during one of his speeches. He accused the south of acting like a sexually promiscuous spouse, who wants a “free love arrangement”, instead of a monogamous marriage. He tried to say that we are all The United States, and that we need to work things out together for future generations.

The fact that Lincoln chose t o compare the situation to marriage wasn’t a coincidence. At that time, people were debating whether divorce should be legal, or not. White people were fighting for their civil rights to be free of an unhappy marriage that was holding them back, while black people were fighting for literal freedom from slavery. In both cases, the south didn’t want things to change. Wives, like slaves, were a man’s property.

In the eyes of the religious community, the sanctity of marriage was under attack. In 1903, leaders from Christian churches from around the country met for The Inter-Church Conference on Marriage and Divorce. Just like the name suggests, these people were trying to figure out how to keep people married. In their eyes, they believed that divorce would lead to the destruction of the American family structure and way of life. Today, the Catholic Church still refuses to acknowledge divorce in the spiritual sense. They believe that once you are married in the church, you are married forever.

Even after the creation of these divorce colonies, there were still a lot of legal debates when it came to returning him. In 1942, an English man named Earl Russel traveled to the United States and got a divorce in Nevada. When he returned home to England, he got married to his second wife. However, the English court system decided not to honor the divorce from Nevada, and sent him to jail for three months for committing bigamy.The divorce system that exists today may not be perfect, but it is a massive improvement compared to the legal and social complications that existed in the past.

Women and the Law In the Early 19th Century. ConnerPrairie.org