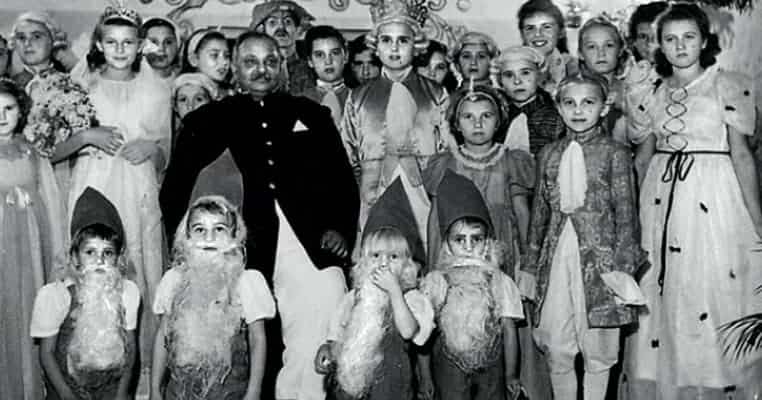 That Time The Maharaja Adopted Hundreds of Polish Orphans During WWII

In 1939, World War II began, and Germany invaded Poland. Soon after, the USSR showed up as well, and these partners divided up Poland for themselves. Polish civilians were dying every day. While many Poles were scattered to other parts of Europe, many of them did not feel truly safe from the ever-growing power of the Nazi Party. As more and more adults were killed in battle, thousands of Polish orphans were transported to orphanages in the Soviet Union.

The civilians in these camps were living in squalor as prisoners of war. Jewish citizens were transported to Nazi death camps, like Auschwitz, but non-Jewish people were left as refugees. They were living in tents, because there was not enough housing to support them. They were not fed enough, and many of them were growing thin and sick. With the rest of the western world preoccupied with fighting a war, there was nowhere for the hundreds of orphaned children to go.

Maharaja To the Rescue

At that time, a man named Jam Sahib was the Maharaja of India. When he heard about these refugee children and saw photographs of children where their rib cages were visible, because they were clearly malnourished, his heart bled for them. India became the first country that welcomed all Polish refugees, so they could live in peace. The Red Cross and British consulates in Poland began a long process of arranging the transport of these children. Six hundred and forty girls and boys, along with hundreds of other adults traveled thousands of miles in a ship. Any teenager over the age of 15 was given asylum in the country, and adult men were allowed to live and work there as refugees, as well.

The 640 children under the age of 15 were taken directly to the royal palace in Bombay, where they were greeted by the prince who was now their adopted father. The Maharaja said, “You are no longer orphans. From now on you are Nawangarians , and I am Bapu, father of all Nawangarians, so I’m your father as well”. He only want to make sure these children all felt loved and cared for.

On the first day they arrived, the prince had set out a huge feast for the children to eat, but it was all spicy Indian food. None of them had ever seen this sort of food before, and they simply couldn’t handle the spice. So they were afraid to eat, even though they were starving. Instead of forcing them to adjust to the new culture, the prince hired seven Polish chefs to work at the palace, so that the kids would have their favorite foods.

Even then, the children could take requests. One day, some of the older boys decided to organize a strike against spinach. They wanted to ban spinach, since it reminded them of a traumatic memory of when the Soviets only fed them canned spinach for two weeks straight. The kids all passed their spinach down the table, and it sat in a big green pile. Once he heard the story of their experience with being nearly starved to death on spinach, the prince set out an official order to the chefs they were never allowed to feed the children the green stuff again.

Before they had arrived, the Maharaja had built a dormitory where each and every child had their own bed. Behind the royal palace, there was a large guest house, which he transformed into a school with proper classrooms complete with tables and benches. A few Polish women were also able to escape to the Maharaja’s palace with the children, and they worked as teachers, where the kids could learn in their mother tongue. It would take some time before their textbooks to arrive in India, so the older children would help the younger kids by writing down the lessons they had learned from previous years. They created handwritten textbooks, complete with illustrations all from memory.

There were plenty of places for them to play, and they were surrounded by a literal paradise. The beach was within walking distance away, and so was the jungle, where kids could pick fruit off of the trees for snacks. Since it would take a while for their formal education to arrive, the kids were given swimming lessons, and learned teamwork by formed sports teams to play volleyball and soccer. They often went camping on the beach, under the stars. Even though they were given a lot of freedom to play, the royal guard kept a watchful eye over them to make sure they never got hurt.

He made sure to give them beautiful experiences during every holiday they were used to celebrating in Poland, like Easter and Christmas. On their first Christmas morning, a herd of camels carrying thousands of presents on their back walked towards the palace, and a man dressed as Santa Claus was riding one of the camels at the front of the pack.

During an interview with a Polish magazine, the Maharaja explained that these children had been through enough tragedy in their lives, and he wanted to give them as much of their childhood back as he possibly could. “Maybe there, in the beautiful hills beside the seashore, the children will be able to recover their health and to forget the ordeal they went through…. I sympathise with the Polish nation and its relentless struggle against oppression.”

Since most of India was a British territory, the vast majority of Europeans who were living there spoke English. However, the prince did not want these children to grow up to forget how to speak Polish. Their lessons in school were all spoken in Polish, and he ordered thousands of Polish books, and built a library to put them in. The Maharaja imported materials from Poland, and custom-made traditional clothing for their children to wear, so that they could experience their home country’s history and culture as much as possible, even though the were thousands of miles away. They sometimes referred to this as “Little Poland”.

A priest named Father Pluta gave church services in Polish every Sunday, and Indian doctors and nurses would travel to the palace to give the children regular checkups, and take care of them whenever anyone got sick.

The Maharaja knew that some day, the war would be over, and the kids would return to their home country. The prince made sure all of the children’s identities were well documented so that the Polish government and the Red Cross could help them transition back home and find any surviving relatives. Some of them were lucky enough to even discover that their parents were not dead after all, and they were just separated during the chaos. When World War II was officially over, and it was safe for the children to go home. They were transported back to their mother country.

The Polish government thanked him for taking care of their orphans. When it was time for them to go home, the children were crying, because they loved their “Bapu” very much. The Maharaja had grown to truly adore all of these kids, and he was sad to see them go. The prince said that he did not want any money for their care from the government. All he wanted was a street named after him, so that they would always remember. Unfortunately, the Soviet Union still had a lot of control over Poland. It was not until 2012 that the government could name and area of Ochota, Poland “The Good Maharaja Square”. There is a monument in his honor there. In Warsaw, Poland, a school was named Jam Sahib in his honor. The school made it their mission to bring in refugee children from all over the world, just as he had.

These Polish children refer to themselves as “The Survivors of Balachadi”. Many of them who were teenagers at the time fell in love and got married, living out their life together back in Poland. One survivor named Jan Bielecki said that when he was back in Poland, he often missed his life in India, and yearned to go back, and still considers it to be a second home.

Even though there were almost a thousand people involved in the life in Little Poland, thy truly did become one big loving family. Many of these children returned to India to visit their caretakers, who were equally nostalgic, holding on to momentos and clothing that was made for the children. Every year, the orphans threw a “Family Reunion”, where they got to see one another. As time went on, they grew up, had kids of their own, and grew old. Fewer and fewer survivors of Balachadi are left to tell their stories, but none of them ever had a bad thing to say about the kind Maharaja.

A Little Poland in India. (Documentary.) The Government of Gujarat. YouTube. 2015.

How One Maharaja Helped Save the Lives of 640 Polish Children and Women During World War II. Anandita Jumde. 2016.