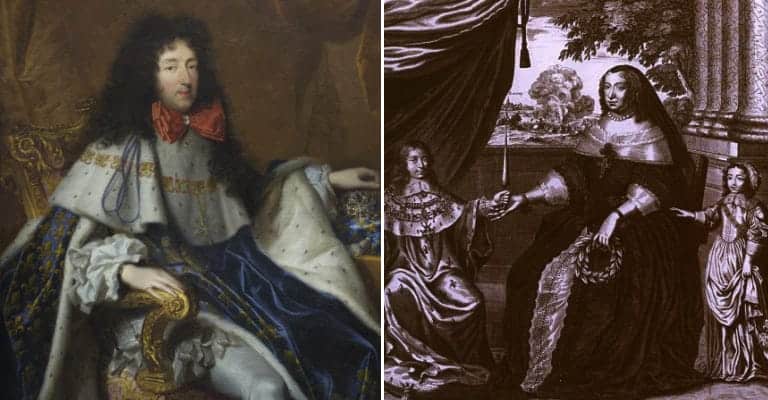 Sibling rivalry is a conflict that literally runs blood deep. The competition between siblings is a theme that runs across many of the pages of history and one of the most epic tales of brotherly discord is that of the Sun King, Louis XIV and his brother Philippe, Duke of Orleans. The Duke was born on September 21,1640 and was the younger brother to Louis, putting him second in line for the throne of France. From the time he was young, it was clear that Philippe was a bright, outgoing, and very attractive child who would go on to lead a very interesting life.

As brothers, Philippe and Louis were almost fated to have a rough relationship, especially given the time period in which they were born. In general Philippe’s accomplishments in life were hidden at the behest of his brother the king. It appeared that Louis would rather deal with the dramatic and at times flamboyant lifestyle of his younger brother, instead of compete with him in the world of politics or nobility. It is clear that from the time that they were children, this element of competition would ensue.

Second Son of the King

Being a child of the aristocracy often comes with many perks, but also many responsibilities. As Philippe was the second son of the king he was treated well, but not with the same care as his older brother Louis. The main reason for this is simple: Louis will be king, and barring anything happening that would leave Louis unable to fulfill his duties, Philippe would never wear the crown. This simple fact sets up a somewhat dangerous dynamic for the two brothers from the time Philippe was born.

Following his birth, Philippe was placed into the care of two different governesses, as was his older brother. Shortly after his brother Louis ascended the throne, Philippe caught a horrible disease that was fairly common at the time known as smallpox. He did manage to survive and his education was then taken over by a series of tutors that were chosen by his mother and her right hand man, Cardinal Mazarin. It became clear at this age that Philippe was an extremely intelligent child, and he received education in everything from languages to mathematics to dancing.

One person who was extremely influential on Philippe’s childhood was his mother, Anne of Austria. Though she did not physically raise her son in a lot of ways, she had her hands in just about anything he did. It is said that she helped to foster one of Philippe’s defining characteristics: his effeminate qualities. As he was such a pretty child, she is said to have referred to him as ‘my little girl’ and encouraged him to dress in female attire.

Though he was born a male, Philippe took an interest and a liking to the dresses, wigs, and jewelry that his mother encouraged him to wear as a child. He liked it so much in fact that he continued to dress this way as a young man, despite the disapproval from his brother and others in the nobility at the time. This started to become more of an issue around the time that Philippe was 18 years old, when Louis fell extremely ill and it was assumed that he was going to die.

Around the time of Louis precarious illness, more focus was on Philippe as he was next in line for the crown. His mother doted on him even more during this time and he was being groomed for the throne. Louis did recover, and Philippe was again left to more of his own indulgences, though he was not allowed to do anything that might enable him to be successful and independent from the crown. Despite the fact that he was very closely watched over by his mother as a child, after the scare with his brother’s health Philippe was again allowed a bit more freedom of expression. Some attribute this to the lifestyle choices he made later in his life.

The lifestyle choices Philippe made are ones which makes his story so unique. One of the most notable aspects of his lifestyle choices was the way he chose to dress. It is clear that as a child his mother essentially liked to treat him like a doll and dress him up. The part that is intriguing about this is that he continued to dress this way into adulthood. He often chose to dress as a woman and even attended royal parties and such dressed in this way.

Though his brother the king did not approve since crossdressing was a rather outlandish action at the time, especially for the nobility, it is rumored that he allowed Philippe to continue this indulgence. Why would he do that? Political gain of course. By allowing his brother to embrace his feminine and therefore weaker qualities, it made Louis himself look more manly in the process, which helped to bolster his rule.

In addition to his love of provocative attire and outlandish parties, Philippe also had an attraction to men, which in the eyes of some posed a problem. Louis never approved of his brother’s male companions and thus often kept him from participating in many political affairs that tradition would usually dictate he be apart of. It again appears as if Louis took another step in limiting his brother’s ability to participate in government issues in order to maintain his power.

Despite his inclination for male partners, Philippe was married twice.His married his first wife Henrietta and following her death in 1670, he married a German princess named Elizabeth Charlotte. While married to both women Philippe still indulged in his relationships with men, yet he still has multiple children with each wife.Neither his wives nor his brother approved of these liaisons and it of course resulted in almost constant drama within the French court.

His first wife Henrietta reportedly did not remain faithful to her husband either, having affairs with some of his lovers and even his brother, the king. This is also believed to be a possible contributing factor to his behavior of gallivanting around with his lovers, because his wife’s behavior is believed to have made Philippe extremely jealous. His second wife Elizabeth reportedly handled his indulgences with much more grace and dignity, going so far as to give up her marital bed to him and his lovers after she had his last child.

Despite having a rather dramatic life at court, on the military battlefield Philippe was a very accomplished soldier. Philippe had a strong sense of duty to his country as well as an inclination for military strategy. He performed well as a military commander in the War of Devolution in 1667 and in 1677 was promoted to Lieutenant general. With this promotion, he essentially became the most powerful man in the country, second only to his brother the king.

He won the Battle of Cassel against William of Orange which was a significant accomplishment that gained Philippe a lot of fame in the eyes of the French people. He received so much praise that it eventually became a problem.As The Sun King did not like the idea of his brother becoming a political threat, he essentially removed him from his position and no longer allowed him to participate in any more military conflicts.

Though his military career was crushed by his brother the king, Philippe did not just fade quietly into oblivion. He continued to be the source of the occasional scandal at the French court, but he also began to focus on his love of art and architecture. By becoming a patron of artists during his lifetime and providing renovations to many of his properties, he was able to amass a fair amount of wealth all of his own for him and his children.

Of his surviving children, two of his daughters became queens and his son Philippe II followed in his father’s footsteps with establishing his own military career. Philippe II was on his way to becoming a great soldier, when his uncle King Louis put a stop to his military career as he had done to his father. Once again the Sun King could not have anyone gain any political power that would potentially be a threat to his throne.

It was this conflict that unfortunately seemed to lead to the end of Philippe’s life. He met with his brother the king and the two reportedly ended up in a bitter dispute over the treatment of Philippe’s son. Following this fight, Philippe had a stroke and died June 9, 1701. Even with the conflicts and competition between them, Louis took his brother’s death hard, which is a sign that the love between the two ran deep, despite their differences.

The legacy that Philippe left behind is one that many are not aware of. From his art, to his money, to his children, the impact he made on the world is arguably as important as his brother’s. His children resulted in a dynasty that ruled in Europe for generations, while his military successes changed history. In all of this despite being continually sabotaged by his powerful older brother, Philippe still managed to live his life on his terms and be who he wanted to be. That is a legacy that we all can learn from.

A Broken Fairytale: Inside The Scandalous Marriage of Philippe of Orleans and Henriette of England. Lindsey Williams. Wonders and Marvels. December 2016.