Haunted Hikes: Phantoms Of The Northern Appalachian Trails Are the Remainders of a Bloody Civil War Battle 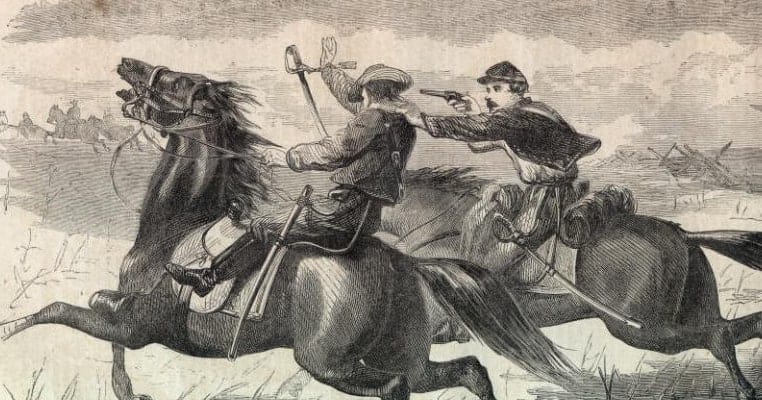 Haunted Hikes: Phantoms Of The Northern Appalachian Trails Are the Remainders of a Bloody Civil War Battle

The mighty Appalachian Trail. Few things in this world spark excitement in outdoorsmen and women like an opportunity to recede in a beautiful forest and gain a chance to get to know yourself, and your environment, just a little more. As Henry David Thoreau once said, “The price of anything is the amount of life you exchange for it”. That price for many was testing their might and will against a 6 month, 2,190-mile hike. A place where a warm meal and a bed – that isn’t a sleeping bag over some moss – is a sight to behold. Yet, it seems to draw folks all over the nation and world. Beautiful waterfalls, paths are hardly taken, lakes that are as pristine as they are wild, and of course all the wildlife and foliage you could imagine. But with the beauty comes a beast, and this beast manifests in the form of paranormal energy felt and experienced by many who pass through these hallowed trails.

Along about the midway point of the Appalachian trail sits a spot called Crampton’s Gap in Maryland. Crampton’s gap is no ordinary spot on the Appalachian Trail, for it is the only spot that can boast a civil war battle. That battle, The Battle of South Mountain or Boonsboro Gap as it was known in the south, was a pivotal moment in the war as this passage was needed for the Union to assault Confederate states directly. With all of the blood spilled on this land, and the soldiers that call those Maryland hills a forever resting home, it’s safe to say that those hollers and mountains are full of Confederate and Union soldiers itching to go back to a home that does not exist. Looking at an overview of the battle will help put the pieces together on this haunting stretch along the Appalachian Trail.

The Three-Phase Assault on South Mountain

The battle of South Mountain had three main battles. The first battle was Crampton’s gap, followed by Turner’s gap, and the deciding battle was Fox’s gap. Near the southernmost point of the battle near Burkittsville, Confederate Calvary along with Major General Lafayette McLaw and the clause division defended Brownsville pass in Crampton’s gap. However, they were unaware of the 12,000 Union soldiers that were about to barrel down on his mere 500 men. The brigade of 12,000 men was led by Major General Henry Warner Slocum on the right and Major General William S. Smith on the left. Together, they seized the gap and captured 400 prisoners mostly men who were arriving late as reinforcements to aid Mclaw’s men.

At Turner’s gap, Confederate Major General D. H. Hill had deployed 5,000 men over more than two miles. This was an attempt to make a defense on Turner’s gap and Fox’s gap. The union would make a counter-attack, using a division known as the iron brigade attacking Colonel Alfred H Colquitt’s brigade along the national road driving it back up the mountain. Colquitt’s Brigade, however, would refuse to yield the pass and would hold the gap for the majority of the day. One mile north of the gap the Alabama brigade of General Robert E. Rhodes sat in defense. Rhodes would eventually have to withdraw because of his isolated position but would fall back and meet with the rest of the Confederates and hold the gap for the remaining part of the battle.

Just to the south was Fox’s gap. This is probably the most pivotable battle that was staged on this day. Dreams brigade defended Fox’s gap against Reno’s IX Corps. In a nine am attack by Union Brigade General Jacob D. Cox’s Kanawha division secured much of the land south of the gap. In the movement Lieutenant Colonel Rutherford B. Hayes (and future 19th president) of the 23rd Ohio led a flank attack and was seriously wounded. Cox pushed through the North Carolinians positioned behind a stone wall at the gap’s crest, but he failed to capitalize on his gains as his men were exhausted. This allowed Confederate reinforcements to deploy in the gap around the Daniel Wise farm. Reno sent forward the rest of his corps, but due to the timely arrival of Southern reinforcements under Confederate Brigade General John Bell Hood, they failed to dislodge the defenders. Union Major General Jesse Reno and Confederate Brigade General Samuel Garland, Jr., were killed at Fox’s Gap. After Farmer Wise was paid one dollar each to bury the Confederate soldiers who died behind the stone walls on or near his property.

The Daniel Wise Farm. Soon To Be Cemetery…

This farm was a happy place until this battle hit. Daniel Wise and his two children were the ones that maintained and worked this land. Because Fox’s Gap was the focal point of the South Mountain Battle and possibly the bloodiest front to be fought, Daniel Wise and his family had to take refuge in a nearby church. The union used the poor man’s house as a field hospital and morgue for what little dead were retrieved out of the battlefield. Legend also has it that the Union Army paid Daniel Wise $1 per body to bury the dead. It was thought that, instead of burying the dead, Wise simply dumped them in an old well on his property. However, it was later found out that, actually, the Union Army had dumped the bodies in the well. The bodies remained there for 12 years until they were re-interred in the Confederate Cemetery in Hagerstown. It’s said that today, you can still hear the loud thuds of the bodies hitting the bottom of the well.

Before we get started on this next one, I would like to point out the first attempt at a Washington monument was not the best. Kinda looks like those fire pits at Ikea. The story behind this is very tragic and could be referred to as an American representation of Romeo and Juliet. Eternal loved sealed by fate. Beneath the monument lies a series of caves. Most likely placed there to help get underneath the monument when they were placing the foundation. During the Civil War, a young soldier stopped at a farm to get a drink from the well. He met the landowner’s daughter and within a short time, they fell in love. The girl begged him to leave the war as the thought of losing him she could not bear, so he deserted. The two ran away and hid in the caves, planning on leaving once the battle had been waged. While hiding there, a rockslide trapped them inside where they died. Today people can hear their cries as they continuously try to navigate the imprisonment of their tomb.

The South Mountain Inn And The Guests That Claimed Permanent Residence

There is nothing quite like an old bed and breakfast or historic inn. The charm they bring along with odd purveyors always seems to help bring back a story for the family to enjoy for years to come. Southern Maryland, and Virginia especially, seem to have an endless supply of old manors you can rest your head in. The South Mountain Inn may not be the most restful, however!

Built-in 1732, this building has stood the test of time. Even gracing the likes of Lieutenant George Washington. The Inn would serve many purposes until it was sold in 1876 to Madeleine Dahlgren who used it as her private residence. Madeleine enjoyed entertaining guests and often had friends stay the night. One night, her guest opened her bedroom window and dozed in the rocking chair near the window. She woke up to eery quiet and a strange glow. She moved to the window and looked out and saw a glowing figure about 50 yards from the house floating above the road.

The apparition was taller than any human she had ever seen. Terrified, she slammed the shutters closed and hid under the covers. A few nights later, another guest was staying in the same room when she too noticed a strange light. To this day this is one of the most common phenomena to happen to residents. People tell of seeing phantom soldiers inside and around the grounds outside of the Inn. There are doors that shake as though someone is trying to open them, and voices and footsteps that come from empty rooms. There are dozens of tales from this Inn that are worth looking into next time you get a hankering for a good ghost story.