This Day In History: The US Marines Invade the Island of Peleliu (1944) 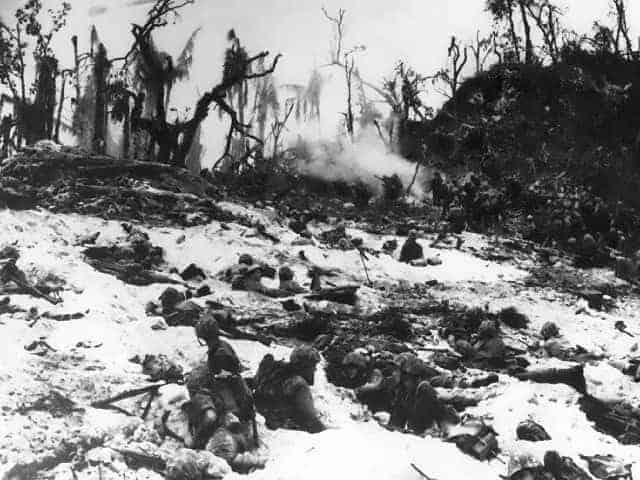 This Day In History: The US Marines Invade the Island of Peleliu (1944)

On this day in 1944, during WW II, the U.S. 1st Marine Division lands on the island of Peleliu, one of the Palau Islands. These islands are in the central Pacific, and had long been occupied by the Japanese and in 1941, it had been a key base, for them when they launched their blitzkrieg across Asia. The Americans invaded Peleliu as part of a larger operation to provide support for Gen. Douglas MacArthur. He was about to invade the Philippines and liberate it from Japanese occupation. The invasion of the island was carried out in order to protect the flank of MacArthur’s forces as they landed on the Philippines. The invasion of the island did not go as planned and it cost many Americans their lives.

The Palaus Islands are part of the Caroline Islands, that had once been part of the German Empire. It has been given to the Japanese at the Treaty of Versailles. Japan had declared war on Germany in 1914 and had allied itself with Britain and France. The Japanese had been in possession of the islands for almost forty years and they had used it as a military and naval base. In 1944, the island was garrisoned by several thousand Japanese troops. The Japanese well aware of the strategic importance of the islands had reinforced them in 1943. The Americans decided to launch Operation Stalemate as part of their strategy of island hopping – that involved seizing Pacific Islands until the US was in bombing range, of Japan. The Operation was seen as essential to ensure the success of MacArthur in his imminent invasion of the Philippines. If MacArthur got into trouble in his invasion of the Philippines he could be reinforced from Peleliu.

Admiral Halsey argued against Operation Stalemate because he believed that MacArthur would only meet limited resistance, from the Japanese in the Philippines. Halsey and others firmly believed that this operation was unnecessary, especially given that it was full of risks for all those involved.

Peleliu was subject to a pre-invasion bombardment. It was shelled by guns from American battleships and also was attacked from the air. However, the shelling was to prove ineffective and had little impact on the Japanese defenders. The Japanese defenders of the island were dug in and hidden the jungle. The Americans had only limited intelligence and it was largely faulty. Upon landing, Marines met little immediate resistance and it seemed that the Japanese had abandoned the island—but that was a ploy. As the Marines advanced off the beach they came under fire from Japanese machine guns. Fire from the jungle also knocked out several landing craft. To the astonishment of the Marine, Japanese tanks and infantry emerged from the jungle. The Marines were trapped on the beach and only the fire from the American battleships halted the Japanese.

The 1st and 5th Marine regiments fought for their lives. More and more Japanese soldiers emerged from the jungle and the island’s many caves. In the first week of the invasion, the Marines suffered some 4000 casualties and the Japanese lost more than 12,000 men. The Americans were in a precarious position for some days, but their superior firepower made the difference. Flamethrowers and bombs broke the resistance of the Japanese on the island—but it all proved pointless and unnecessary. MacArthur invaded the Philippines without any need of Army or Marine protection or reinforcements from Peleliu.