This Day In History: The Spruce Goose Flies for the First And Last Time (1947)

This Day In History: The Spruce Goose Flies for the First And Last Time (1947) 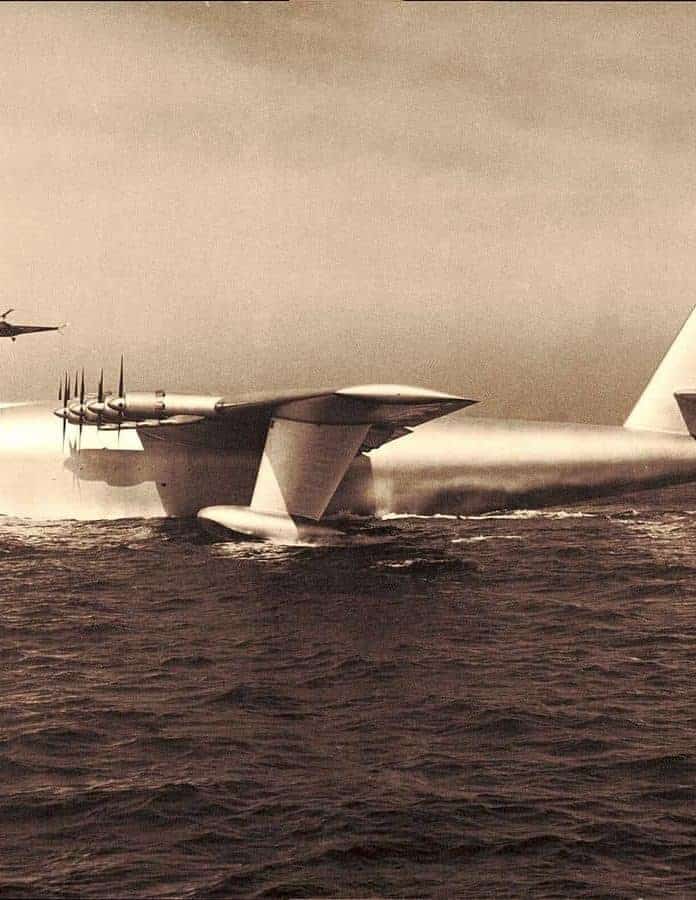 This day in history the ‘Spruce Goose’ or the  Hughes Flying Boat the largest aircraft until then ever built took off on its first and only flight. The Spruce Goose was piloted by its designer Howard Hughes. The plane was built with the latest technology and it was built with laminated birch and spruce. The plane was almost entirely made of wood. It was built to carry some 700 passengers and it was originally designed to carry soldiers into a war-zone.

Howard Hughes was one of the best-known personalities of his time. He was arguably as well-known as the major Hollywood stars. He was also a well-known and very famous movie producer and was often seen with a Hollywood starlet on his arm. Hughes came from an extremely wealthy family from Texas who had made their money in the oil industry. He inherited a huge amount of wealth and he was himself a successful businessman and became one of the wealthiest men in America. Aviation was one of his passions and he designed and flew many planes. Flying his own plane, he broke the transcontinental speed record in  1937. The following year he flew around the world in a record time.

After the Japanese attack on Pearl Harbor, Hughes’ offered his services to the US government and the war effort. The War Department in Washington asked him to design and build a huge flying boat that could fly men to remote areas and in large numbers. Hughes was as ever up to the task and he adopted a concept that was first proposed by an aviation engineer, Henry Kaiser. Initially Kaiser and Hughes worked together but they quarreled and Kaiser walked out of the project. Hughes found it very hard to build the Spruce Goose because of war-time shortages. The millionaire decided to use wood which was plentiful. He fabricated the wood with plastic and covered it with a fabric.  Much of the plane was built out of spruce and this gave the flying boat its name ‘Spruce Goose’.  The Spruce Goose was a unique plane in its size and it easily became the biggest plane in the world and even dwarfed the US air force’s bombers. It had a wingspan of over three hundred feet (bigger than a football field) and was powered by 8 giant propeller engines.

The giant flying boat cost a record 23 million dollars and its construction took so long that America and its allies had won the war before it was ready to fly.  The project was only completed two years after the end of the war in 1947. This meant that the Spruce Goose was not needed despite all the resources poured into it.

The huge resources poured into it led to a Congressional investigation and Hughes came under political pressure to prove that the Spruce Goose was fit to fly. Hughes decided to take the Spruce Goose on  a test flight on this date in 1947. The flight attracted thousands of onlookers even though it was not announced. They watched in amazement as the huge flying boat taxied on the water in Long Beach California and saw the huge plane fly for a mile at a height of 100 feet. The maiden flight of the Spruce Goose  was also to be its last. The plane had major technical flaws and was not really airworthy.

Howard Hughes refused to accept defeat and even after 1950 when he became increasingly reclusive he continued with the project. He kept the plane ready for flight in its hangar for almost 30 years. It had to be kept in a climate-controlled hangar at the cost of several hundred thousand dollars a year.

At present, the Spruce Goose is on display at the Evergreen Aviation Museum in Oregon.