This Day In History: The Siege of Knoxville Begins (1863) 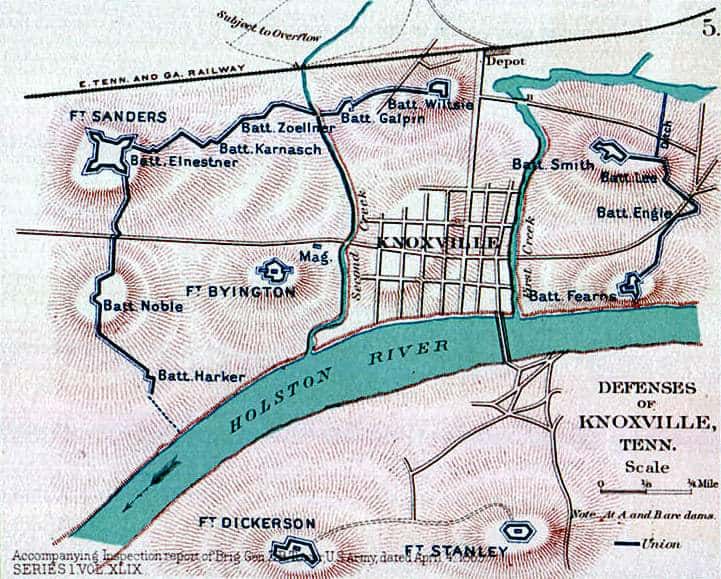 This Day In History: The Siege of Knoxville Begins (1863)

On this day in 1863, during the American Civil War a Confederate army under General James Longstreet advances on Knoxville, Tennessee. After surrounding the city, the Confederates placed Knoxville under siege. The siege was to last for a full two weeks.

The Knoxville campaign as it became known began when General Longstreet took some 17,000 men from the army of General E Lee. In the aftermath of the Battle of Gettysburg the Confederate position in the west deteriorated and the Union secured some key territory. Lee ordered his general Longstreet to reinforce the Confederates in the west. Longstreet set of in the Fall of 1863 and he joined up with some more Confederates and later they inflicted a significant defeat on the Union at Chickamauga. The forces under Longstreet also laid siege to Chattanooga. During his campaign in the west, Longstreet quarreled bitterly with his commander and refused to work with him Lee later arranged for him to be given command of the Department of East Tennessee.

After a period of rest, Longstreet marched his troops towards Knoxville, where the experienced Union General, Burnside was stationed with some 5000 soldiers, many of them raw recruits. Burnside met Longstreet at Campbell Station on the 15th of November, but he could not prevent the numerically superior Confederates from advancing on Knoxville. The next day Longstreet reached Knoxville and tried to cut off the town. After receiving some reinforcements, the Rebels launched a massive attack on the Union line of defense around Knoxville. Their target was Fort Sanders, that Longstreet identified as a weak spot in the Union lines. The smaller Union forces were able to inflict heavy casualties on the Confederates and the Rebels attack failed. The Confederates were not able to completly cut off the Union units, under Burnside and they were still able to communicate with their headquarters.

However, Longstreet’s main aim was arguably not to seize Knoxville but to draw forces away from Chattanooga. The siege of Knoxville was an effort to draw Union forces from this siege and the plan worked. When the Union Army heard that Longstreet was besieging Knoxville they sent over 20,000 men to reinforce the Yankee forces in the town. Longstreet when he heard of the advance of the Union forces decided to retreat and eventually he joined up with Lee once again. The Confederates were able to retreat safely, after their victory at the skirmish at Beans station. Knoxville was to remain in Union hands for the rest of the war and so did most of East Tennessee, after the victory of Grant at Chattanooga. It is generally reckoned that Longstreet had not achieved much in East Tennessee, during the so-called Knoxville Campaign.