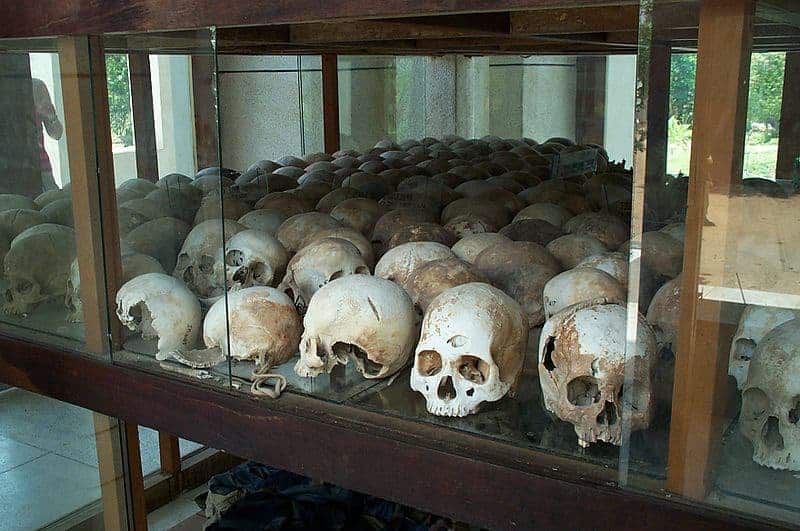 On this day in 1976, the brutal dictator Pol Pot changed the name of his country from Cambodia to Kampuchea. This was all part of his policy of turning the country into an agrarian communist utopia. In fact, his attempt to turn his country into a paradise turned it into a hell. The next three years as a result of his plans, between one and two million people died. Pol Pot was born into an affluent family in Cambodia and was sent abroad to study. While studying in Paris he came under the influence of communists. He returned to his homeland and was determined to launch a communist revolution in a country he saw as being backward and feudal.

Cambodia received its independence from France in 1954 after the French defeat by the Communist Viet Minh. Pol Pot soon became a leading figure in the small Communist movement in Cambodia. He was popularly known as Brother Number One by his fellow communists. For many years he and his Party (Khmer Rouge) operated in the jungles along the Vietnamese border. When the army overthrew the popular monarch the Khmer Rouge waged a brutal guerrilla war against the military regime. The US repeatedly bombed Cambodia at this time in a bid to destroy the North Vietnamese bases in the country.

In April 1975, after almost five years of war, Pol Pot’s guerrillas seized Phnom Penh, after they had effectively cut- it off from the outside world. Many people initially regarded them as liberators but they were to be mistaken. Pol Pot inspired by Mao sought to create peasant utopia in his country He drove all the city and town dwellers into the countryside. Those who refused were brutally killed. The majority of Cambodians had to live in communes where they were terrorized by Pol Pot’s followers, the Khmer Rouge. All Cambodians had to become peasants and the educated were often murdered as they were seen as ‘class-enemies’. Members of ethnic minorities were also murdered in huge numbers. Pol Pot’s social revolution was a disaster and it resulted in famines in which unknown numbers died. He also had thousands more tortured and executed. Pol Pot in order to distract attention from his failures started a series of armed clashes with Vietnam. Hanoi exasperated by the attacks soon decided to invade Cambodia and drove Pol Pot from power. He and his hardline supporters retreated to jungle bases and they waged a guerrilla war against the Vietnamese occupation and those Cambodians who supported them. Pol Pot and the Khmer Rouge was able to hide out in the jungles of Cambodia for almost two decades. After a power struggle, Pol Pot was arrested by members of his own party. Before he was brought to justice he died of natural causes.

Pol Pot was one of the most brutal dictators of all time and his crimes were almost as terrible as Stalin and Hitler.