This Day In History: The Germans Sink The SS California (1917) 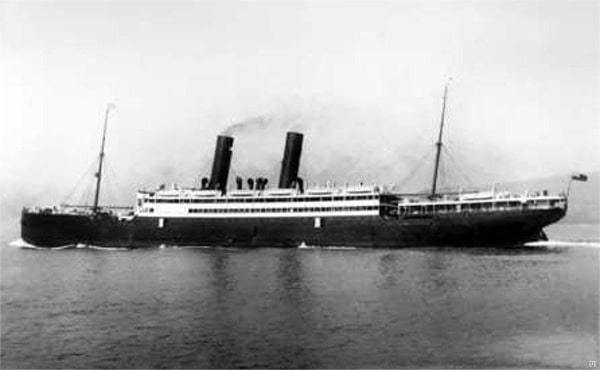 This Day In History: The Germans Sink The SS California (1917)

On this day in 1917, a German U-Boat attacked and sank the SS California, a passenger ship. This incident resulted in momentous consequences and arguably changed the course of World War I. In January 1917, the Germans announced to the world that they were resuming unrestricted submarine warfare. They had stopped this tactic in 1915 after the sinking of the Lusitania, an action which nearly resulted in the entry of the U.S. into the war. The Germans decided to renew unrestricted submarine warfare in order to stop U.S. supplies from getting through to the Allies, and also to pressure Britain, which depended on food imports from its colonies.

Three days after U.S. President Woodrow Wilson’s decision to break off all diplomatic relations with the Central Powers, including Germany, an incident occurred that seemed to guarantee that the Americans would enter the war. Wilson had warned the Germans that if another U.S. vessel was attacked by a German submarine, it would mean war. The Germans did just that on this date in 1917.

A German U-Boat spotted the American ship the SS California, and, with the order from Berlin sanctioning unrestricted attacks on shipping, it fired its torpedoes at the U.S. vessel. The SS California had left New York the week before, and it had over 200 passengers and crew on board. The ship had made it safely across the Atlantic. However, as the ship approached the British Isles it entered a danger zone. As the ship approached Fastnet Island, off the coast of Ireland, a crew member spotted a German U-Boat. There was near panic on the ship. The SS California was armed with a small cannon and the captain ordered the crew to open fire on the U-Boat if it threatened the ship.

The crew did not have a chance to fire on the submarine before the U-Boat fired two torpedoes. One of the torpedoes missed but the second hit the port side of the ship. The ship weighed over 400 tons and began to sink immediately as the torpedo tore a huge hole in the port side and water began to flood into the vessels. It took the ship ten minutes to sink. The explosion from the torpedo killed five sailors. As the SS California sank, the captain ordered the lifeboats to be launched. Most of the crew and the passengers were able to leave the ship. The captain also issued an SOS message that alerted all ships to their predicament. In total, almost 40 people drowned on the SS California. Those who did manage to make it onto lifeboats were later picked up by Allied ships and taken to Ireland.

The attack on the SS California angered the U.S. greatly. It seemed as if the Germans deliberately attacked the vessel in order to provoke the government in Washington. The sinking of the SS California was one of the incidents that led President Wilson to declare war on Germany.

On April 2, 1917, Wilson went before Congress and asked them to vote on the formal declaration of U.S. entrance into the First World War. Four days later, America declared war on Germany.