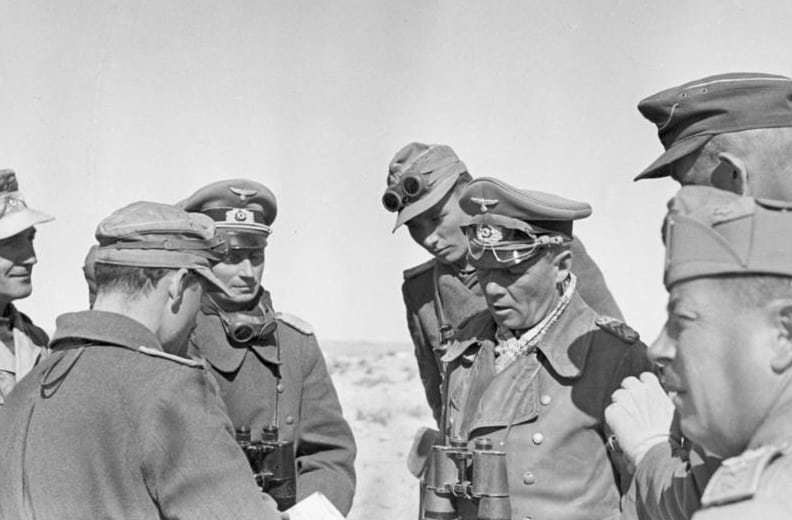 On this day in 1944, the great German General Erwin Rommel, known as the ‘Desert Fox’ commits suicide. He had been serving in France and had been entrusted by Hitler with the defense of Europe against any possible invasion by the western allies. Hitler had always rated Rommel highly and regarded him as one of his finest generals.

Rommel had had a very distinguished career. He rose from modest beginnings to become an army officer in the German Imperial Army. He served throughout WWI in France, Romania and Italy. He was an incredibly brave soldier and was an able tactician. After the war and the Treaty of Versailles he was appointed to a series of military academies as a teacher. While working at these academices he wrote a manual on infantry tactics and this was well received and read with enthusiasm by Hitler.

Rommel was not a Nazi but like many other Germans he was very impressed by Hitler and his commitment to make Germany great again. He was a German nationalist and liked that Hitler and the Nazis were anti-Communist. At the start of the war he was commander of the troops that guarded Hitler’s HQ . He commanded a tank division during the Fall of France and became something of a national hero because of his tactics and victories. Soon Rommel was acknowledged to be a master of tank warfare. As a result, he was given command of the Afrika Korps and he soon scored a strong of victories before the defeat at the second Battle of El Alamein. After the fall of Africa to the allies he returned to Germany.

Rommel believed that any allied attack would succeed. By 1944 he knew that any chance of a German victory had long gone. He was approached by some anti-Nazi German officers and he agreed to join in the plot against Hitler. However, he was eager not to see Hitler assassinated. The conspirators wanted Rommel to become the head of government after the overthrow of Hitler. Rommel was in favor of negotiations with the western allies and hoped like many other Germans to forge an alliance with them against the Soviets.

After Day-Day, Rommel was wounded by an air attack on his car as he was traveling in Northern France. This led to his hospitalization and he played no further part in the war. After the failure of the German resistance to assassinate Hitler and the collapse of the efforts to oust him, details of Rommel’s role in the conspiracy against the Nazi government were revealed.

Hitler could not admit that a German hero like Rommel was part of a conspiracy against him and he decided to order the ‘Desert Fox’ to commit suicide. If he agreed to kill himself Hitler stated that his family would not suffer any retaliation from the Nazis. On this date in 1944, Erwin Rommel took his own life by swallowing cyanide.

The German government gave Rommel a lavish state funeral. His death was attributed to his war wounds.