This British Officer Had to Lie, Cheat, and Steal to Form the Successful SAS 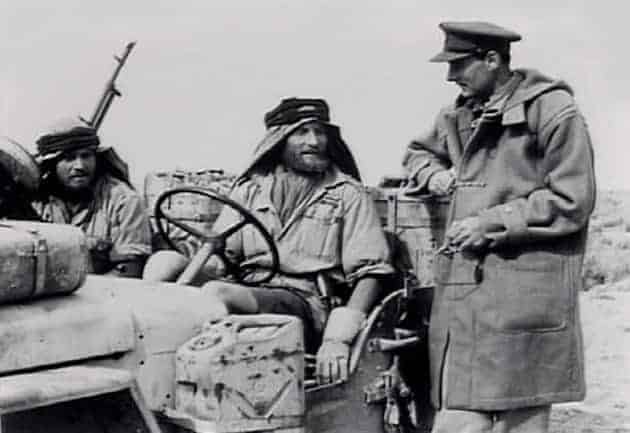 This British Officer Had to Lie, Cheat, and Steal to Form the Successful SAS

The concept of hiring an elite group of special forces in Great Britain was first put into action by David Sterling. He founded the Special Air Service (SAS) in 1941for the British Army in response to World War II. The select brave soldiers fought the German Nazis on a global scale.

However, the SAS origins are just as unrefined as its founder. Never mind the fact that David Stirling was the son of royalty; his father was Brigadier General Archibald Stirling and his mother, Margaret Fraser, was a direct descendant of the King of Scots, Charles II. It did not matter that his cousin was the 15th Lord Lovat Simon Fraser or that his paternal grandparents were knighted by the queen.

Despite growing up with an aristocratic family in Scotland, David Stirling had an eye for adventure fueled by playful mischief.
In fact, while studying in college, he was kicked out because of drinking and gambling. After leaving school, he decided he wanted to climb Mount Everest. It only seemed appropriate that he could pass the training because David Sterling was quite athletic, standing at 6 feet and 6 inches tall.

While he was training to become a mountaineer, the war broke out. He was commissioned into the Scots Guards in 1939. Like his career at the institution, he was nearly dismissed after staying out all night and falling asleep in an officer’s class. It turns out he would later have quite the rendezvous with this same military instructor later in life.

His focus became the No. 8 Commando in June of 1940, and David Stirling volunteered under Lieutenant-Colonel Robert Laycock. Also referred to as Force Z or Layforce in later years, it disbanded and ended in August of the following year. The Army thought the unit provided too little a return when it came to fulfilling costly tactics. David Stirling felt otherwise.

It was at this moment that David Stirling knew he needed to form a small group of highly-trained soldiers. Based on his personal war experience, he was convinced that a surprise attack from his men could result in greater damage than a full battle assault because of the enemy’s ability to fight back.

The rebel with a cause knew his idea would get shut down if he followed the proper chain of command. The bureaucracy of the British military during 1941 was rigid, to say the least. Therefore, he was determined to go straight to the head honcho. While in Cairo, Egypt, David Stirling went to the Middle East headquarters for an impromptu visit with Commander-in-Chief General Claude Auchinleck. He entered the building stealthily via a fence.

Already on crutches, the guards spotted David Stirling in the building. He hobbled into an office to take cover. Ironically, the same military instructor whose class he fell asleep in was on his receiving end. Already assuming he was up to no good, he altered the guards immediately.

Without a second to lose, David Stirling fled the office for another mysterious door. This time, he walked right into Deputy Commander Middle East General Sir Neil Ritchie. He took this opportunity to explain his idea to create the SAS. General Ritchie was impressed and convinced General Auchinleck, who was just one office door down, to allow David Stirling to form his special unit.

Initially, the SAS was formed as a regiment with about 60 men under the pretenses that they found fight causing maximum damage with minimal cost. In order to find the perfect soldiers for such a heartfelt duty, David Stirling frequently sought out military soldiers who were under review for discipline. He knew these men who have the heart for action along with the strength to fight.

The unit was even given a misleading name. It was known as the “L” Detachment, Special Air Service Brigade, which reinforced the deception that a parachute brigade existed in North Africa.

The SAS originally faced several problems. Despite forming his team, the British Middle East Command did not favor David Stirling and attempted to delay his efforts by postponing his supply delivery.

The team was short on equipment including tents and other supplies. The courageous soldiers set up a base at Kibrit Air Base. Their first mission was to raid the Allied New Zealand unit, which was well-equipped with gear and tents. They literally stole what they needed to train and start their part fighting in the war.

Another issue the SAS had been on November 16, 1941. After training, the soldiers were ready to attack a German airfield via parachute in support of Operation Crusader.

Unfortunately, terrible weather conditions caused dozens of men to blow off course and land in the wrong spot. 42 of the 61 SAS members were captured or killed. After suffering from one of the biggest storms struck, the Long Range Desert Group (LRDG) came to their rescue; the LRDG was already scheduled to pick up the SAS after the attack.

Although the initial attack was a huge upset, it allowed David Stirling to realize that the SAS needs to approach the enemy by land during the night; it would be more efficient and safer than entering via parachute.

Without a moment to spare, the leader organized another attack. They raided the ports using the basic method. The soldiers learned to bluff through checkpoints by adapting the language of enemy soldiers. They wreaked havoc on German and Italian forces throughout North Africa.

Jock Lewes was under the leadership of David Stirling with the SAS when he invented the Lewes bomb, a hand-held explosive with a fire-starting device – the first of its kind.

David Sterling was also the first to utilize American jeeps in order to cruise across the desert terrain in North Africa. Further, he cut the vehicles apart and fitted them with RAF machine guns. In the night of July 7 into the morning of July 8, 1942, David Stirling led the first jeep-borne airfield raid. The SAS attacked Bagush and five other Axis airfields that night.

One of the most successful raids David Stirling consigned was the night of July 26-27 of that same year. Using 18 jeeps, the SAS destroyed nearly two dozen German aircrafts at the Sidi Haneish landing strip. The soldiers escaped enemy patrols and drove until they reached safety on July 29, 1942.

For over a year, the SAS successfully destroyed 250 Axis aircrafts and hundreds of enemy vehicles. They ruined dozens of supply dumps and broke railroads and other telecommunications. Just as David Stirling predicted, these hit-and-run tactics proved effective.

Although it is obvious to see men like David Stirling are needed during times of war, Field Marshall Montgomery called him, “mad, quite mad.” If John Aspinall tells history, he claims David Stirling strangled over 40 enemies with his own bare hands.

However, his stealthy methods also led to the ultimate downfall of the SAS when he was captured in January 1943 by the Germans. Naturally, he escaped, but was captured by the Italians.

Despite the fact that the Germans and Italians were both Axis powers, the Italians supposedly delighted in the Germans embarrassment that David Stirling got away. After four failed escape attempts under Italian surveillance, the SAS founder was imprisoned in Colditz Castle for the rest of World War II.

His brother, Bill Stirling, and Paddy Mayne took control of the SAS during his capture.

David Stirling was clearly a rogue officer, and probably would have been thrown out of the British Army within a matter of months had he not broken into the British Middle East Headquarters and ambushed the general with his off-the-wall idea.

Yes, the original group was a band of misfits that stole from their own Allies. Nevertheless, the soldiers fought special operations bravely.

There would be no SAS without the David Stirling. Since its creation in 1941, the unit has become of the most capable forces of the military in the world. The gallant soldiers are ready to fight whenever and wherever they least expect it. Because of this philosophy, David Stirling coined the SAS phrase “who dares wins.”

The SAS became a corps in 1950, and still undergoes special missions for covert reconnaissance, hostage rescue, counter-terrorism, and other direct action issues. Within that corps, there are dozens of special units that have aided British allies during times of war.

David Stirling died 11 days before his 75th birthday in 1990. That same year, he was knighted. Several memorials are placed in his honor including a statue of him on the Hill of Row by his family’s Keir estate.